It’s Time for Women to also Get Down on One Knee. 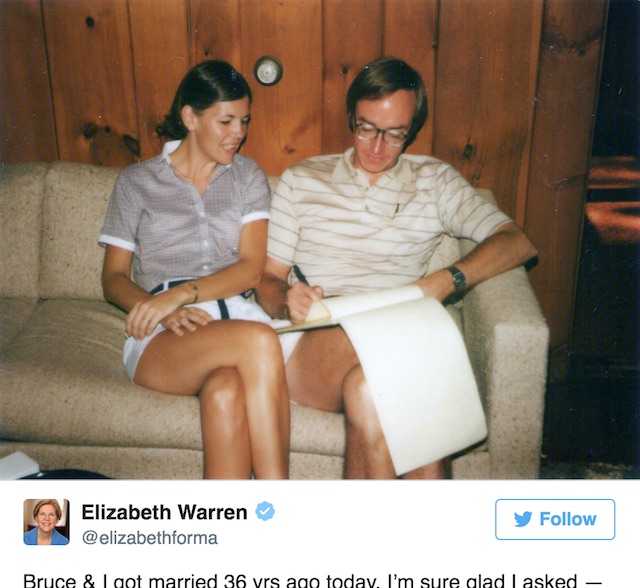 All of us are under the spell of cultural conditioning, stereotypes and assumptions.

For example, in hetero couples it traditionally falls upon the man to propose, and to do so in a romantic way.

Thankfully, U.S. politician Elizabeth Warren did not let these cultural assumptions stop her when she asked her now-husband Bruce Mann to marry her:

“I proposed to Bruce in a classroom,” Warren wrote in her recent Facebook post. “It was the first time I’d seen him teach, and I was already in love with him, but watching him teach let me see one more thing about him — and that was it. When class was over and the students had cleared out, he came up to me and asked, somewhat hesitantly, ‘Uh, what did you think?’ ‘What can I say? Will you marry me?'”

Bruce & I got married 36 yrs ago today. I’m sure glad I asked — & sure glad he said yes. Happy anniversary, Sweetie! pic.twitter.com/0b1qNVMEgo

Part of what I find so charming about her story is that it does not adhere to the stereotypical Western engagement process of a man dropping to his knee in front of his partner with an expensive engagement ring.

This one-sided expectation puts an excessive burden on the man (be creative, be romantic, spend lots of money on a blood-soiled and overly pricey diamond ring because that shows you truly love her) while placing the woman in a passive situation.

This is quite unfair to everyone.

In contrast, it is stories like the one shared by Ms. Warren which create more space for partners in a relationship to propose marriage in a way that feels authentic to them, regardless of cultural expectations.

And while it is the exception that women ask men if they want to marry them, Warren is far from being the only one to do so. Other couples where the female partner popped the question include Elizabeth Taylor and actor Michael Wilding, as well as Pink and motocross champion Carey Hart (to whom she proposed mid-race).

As the monarch, Queen Victoria had to propose to Prince Albert, which she did in October, 1839. In her diaries, she described his acceptance of her proposal as “the happiest brightest moment” in her life.

Actress Kristen Bell even popped the question to her partner Dax Shephard on Twitter:

.@daxshepard1 will you marry me? Xo #marriageequality #loveislove”

And it’s not just female celebrities who depart from typical gender roles. For instance, a woman described her proposal on reddit: “He cried. It was adorable. Made me love him so much more. I never realized that I could have that kind of emotional impact on someone.” Another woman commented: “I asked my husband to marry me after we’d dated a month. Technically we’d known about each other for a few years, but had only met a few times before we started dating. When I ask[ed], he said, Oh, wow, yes! I wanted to ask you, but I thought you would break up with me!”

A male redditor wrote: “My wife proposed to me. I thought it was awesome! I was planning to ask her on New Years Eve, and she beat me too it and asked me on Christmas Eve. Never felt emasculated and still think it was awesome.”

Another redditor shared: “My mom proposed to my dad. They were sitting in the living room and my dad makes a comment about why it is that men always have to propose to women. My mom took that as a challenge and got on her knee right then. They laughed about it and mom even called my grandmother and asked for her son’s hand in marriage. Gma said, if you want him, take him.”

Even my own mother-in-law proposed to her partner many decades ago. In a day and age of high divorce rates, she is still happily married.

The truth is that the typical engagement story does not work for everyone because there are so many different personality types and situations. It may not work for couples who want to move beyond traditional gender roles in their interactions with each other.

It also may not work for individuals who do not like to be very emotionally expressive and who may feel better about discussing marital commitment soberly and without fanfare with their partner. So what if a proposal is not romantic in a traditional way? If we are with someone we think we could grow old with, does a proposal really have to be perfect to “win” that person over?

While I think preparing a great proposal can be fun and a way to create a wonderful memory, the proposal itself hardly matters in the long run—it is the rest of our lives together that does.

And while I think there are many ways to marital happiness, I admire couples who do things their own way without allowing rigid gender roles to get in their way. I think unconventional behavior shows strength and out-of-the-box-thinking, two traits I value deeply.

Asking for what we want is generally something that will get us far in life. Why then should women in heterosexual relationships be confined to waiting for their partner to take the initiative?

Gender roles are just, well, roles. But we are not roles. We are living, breathing human beings. And it is time that this also gets reflected in our approach to heterosexual marriage so that society makes room for either one of the partners (or both) to propose.

All of us, regardless of gender and sexual identity, deserve to be complimented, courted and proposed to. And we all deserve a chance to tell the person we want to spend our lives with that we want to marry them.

So if we want to ask our partner to marry us, let’s simply take the liberty to do so—whether we do it kneeling down, or standing in a classroom.

If you would like to improve your relationship, please also check out my complimentary love and romance healing here.

The Science Behind why we Should Ditch Diamond Rings & Costly Weddings