The story behind the Elephant-headed God. 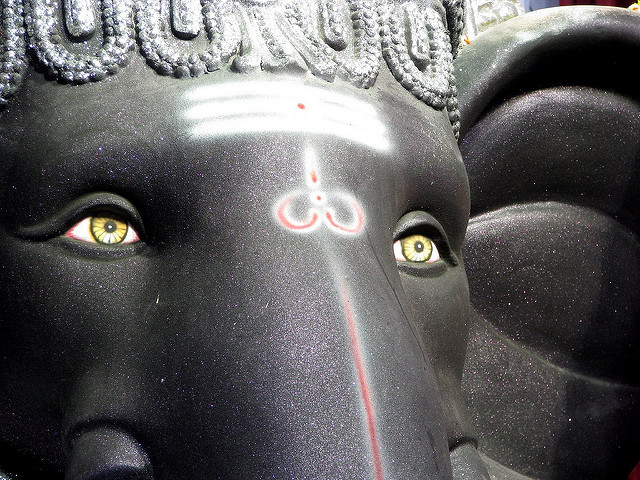 Most yogis know Ganesh is the Lord of Wealth and the “Remover of Obstacles,” but it is by taking apart his myth that we learn how “removing obstacles” works.

The father of this elephant-headed guy is the god, Shiva—who symbolizes being—and his mother is the goddess, Shakti—who is doing.

Shiva is a yogi. We see images of him in forests and mountains meditating.

He is the power of emptiness.

Parvati is his wife. She acts and creates.

She is the power of fullness.

She is the power behind samsara—the “All Flow”—the world we all live in.

The scriptures tell us Shakti simply wanted a child.

Desire and wanting are important in Indian philosophy. They call it iccha—a first principle of the universe.

Sitting in the bath, she pushed the dirt off her body to form him as if from clay, very much like the way Yahweh created the first man, Adam, as the Bible says.

She was in the flow, in her bath, in dreamtime. She made the boy up from the ideal world of dreams. She set him up to guard her waters of flow—as we humans do.

She set him up to protect her dreamy fantasies.

We try to protect what is meaningful to us with rigid ideas that guard us from what is contrary or real.

Shiva is emptiness. He is all possibilities that come out of emptiness, all that comes from the abyss of the unknown; hence he is called The Destroyer. His “Beingness” is greater than anything that is less than being.

Shiva is the All-in-All, greater than any human idea of the self or the world.

Shiva and Parvati, being and becoming, the uncreated and created, must move toward each other.

Shiva loves Parvati. He meets the boy guarding his wife and cuts his head off.

Ganesh was “headstrong.” Seemingly pure—like an “Ivory Tower”—he expressed a mere ideal. He was his mother’s dream of a perfection (as boys tend to be) and he stood inside his own oedipal dream that he could come between his father and mother.

He stood for a fantasy. He blocked life’s real flow.

He prevented the movement of Shiva toward Parvati––never a good idea.

In fact, he destroys all that is, was, or will be.

He is eternity, and eternity swallows everything that has odor, taste, touch, color, sound or thought in this world. All things fade, change, dissolve and disappear. Only being is eternal.

Parvati was mortified, shocked by the absoluteness of Shiva’s murder of Ganesh. As wives do—she berated Shiva, and—as husbands do, because the grace and flow of the feminine is holy to them—he moved to appease her.

He found an elephant. One who is said to have also died defending his mother. He chopped that head off, too.

He melded it to Ganesh.

“Elephants never forget.” They symbolize the ups and downs of the past, and the wisdom that results from pain and experience. Walking heavy and slow, they represent the reflection arising from the flow of years. “Things are not black and white,” we say. Elephants are gray. They symbolize the retreat from extremism, the lightness of belief in a perfect world. Elephants symbolize the painful heaviness of the real.

Life is wisdom and experience. Life is the change of ideals into the real—that unexpected, wild and self-contradictory thing that life always is. The surreal elephant, with its tree-legs, butterfly-ears, and a nose that is a snake, represents this.

When all dualities come together, we have the ultimate.

Shiva made Ganesh a god.

His big head is the big, big, real world—the macrocosm as opposed to the microcosm. New-made, Ganesh represents life “as it is” (as the Buddhists say) and he retakes his position as the guardian of Parvati alongside Shiva’s army of ganas, his ghosts, or reminders of being. As the isha or pati (ruler, leader) of these ghosts, he is called Ganesha or Ganapati.

These ghosts are our unconscious—the things we don’t see—that block us from realizing our potential.

Ganesha rallies these unknown things, he leads them towards one-pointedness, ekagrata—single-flow.

In a more singular sense, he is also said to lead the “ghost,” or the life-force, of the body by standing at the low power center (or chakra) called Muladhara at the pelvic floor.

He regulates the body’s energetic blocks to flow. He open rules the pranas, the bodily flows from this place.

To make things happen, life force flows into us and into the world of being. It then creates the dualism of doing and deciding.

Ganesh can open us to the door of infinite bliss through creating infinite flow and infinite possibilities within this world.

This is why people put statues of him around the house.

His fat belly is satisfaction––all things made by doing—all wealth. He rides a mouse, which means he crushes the worrying, scurrying mind of hesitation and ratiocination. Opening the gate to your goal, he is the alpha state of the mind—what we need to make books, art, or music. Like the Goddess Saraswati, he is the symbolic lord of scholars, artists and musicians.

Ganesh makes us one with samsara.

Ganesh opens muladhara. He secures us to the ground of being, helping us to sacrifice what is over-detailed, meaningless and mousy in the world, so the heights of being can be reached.

When he was born, Ganesh was a symbol of small-mindedness. But through the painful initiation of his father, his head (that is, his consciousness) is now enlarged; hence, the power of Ganesh itself is said to stop us from being “headstrong” or “stiff-necked”—as the Bible says the Jewish people were when Moses tried to lead them to Israel.

He opens up the head and neck’s higher power centers, opening us to the blessings of divinity and doing. These two are represented by Ganesha’s wives: Siddhi (holiness) and Riddhi (wealth).

Every obstacle yields to flow.

Everything yields to Ganesh.

That is why some sects of India make him the chief spirit. They see Ganesh as important because he guides our way into the material world—or into the divine world—or both.

We praise him with a phrase that means, “Victory for Ganesh!” Jaya, Jaya, Jaya! Ganesh! 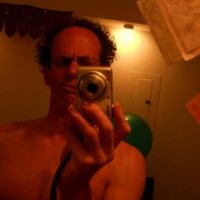 Hey, thanks so much for reading! Elephant offers 2 articles/day for free. If you want more, grab a subscription for unlimited reads for $3.50/month. And clearly you appreciate mindfulness with a sense of humor and integrity! Why not join the Elephant community, become an Elephriend.