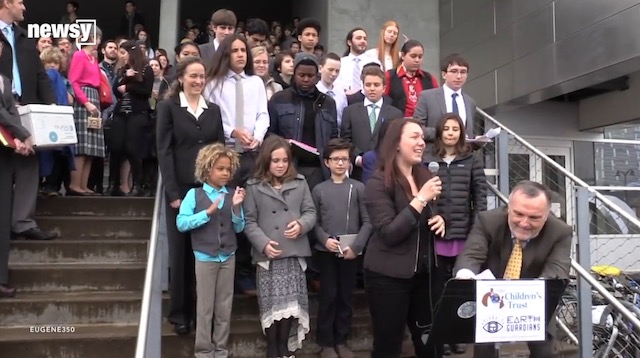 While much of the nation reeled in collective shock following the 2016 election, environmentalists won big in U.S. District Court in Eugene, Oregon, November 10th, 2016.

This time, the fight for Earth’s lands and waters wasn’t led by scientists or seasoned environmental warriors—it was led by young people.

Twenty-one plaintiffs ranging in age from nine to 21 years old, filed a lawsuit against “The United States of America, et al,” which includes President Obama, the fossil fuel industry and several federal oversight agencies. They say the government and corporations have damaged the planet for future generations, and they want them to be held responsible.

A federal judge has decided they have a valid claim, and has given them the green light to take the fossil fuel industry and the U.S. government to court.

The suit claims that, even though there are many groups and individuals responsible for greenhouse gas emissions, Obama and these agencies hold “a higher degree of responsibility than any other individual, entity, or country.”

For more than 50 years, the lawsuit says, the President and these agencies have known that fossil fuels “significantly endanger plaintiffs, with the damage persisting for millennia.”

The plaintiffs, who are mostly from Oregon, claim the government and the fossil fuel industry have “violated their obligation to hold certain natural resources in trust for the people and for future generations.”

Their efforts were spearheaded by the non-profit, Our Children’s Trust, which is leading a global movement to secure climate rights for future generations.

Government and fossil fuel industry lawyers filed a motion to dismiss the lawsuit, but U.S. District Judge Anne Aiken made a monumental ruling that the lawsuit could go on.

“Federal courts too often have been cautious and overly deferential in the arena of environmental law, and the world has suffered for it,” Judge Aiken said in her ruling.

Aikin wrote: “This action is of a different order than the typical environmental case. It alleges that defendants’ actions and inactions—whether or not they violate any specific statutory duty—have so profoundly damaged our home planet that they threaten plaintiffs’ fundamental constitutional rights to life and liberty.”

Her ruling opens the door for other pending lawsuits across the nation that hold the government and the fossil fuels industry responsible for greenhouse gas emissions and environmental pollution.

These kids are up against some tough opposition.

API is a key player in lobbying for the interests of oil, gas and coal companies, including supporting environmentally dangerous oil extraction and fracking, according to SourceWatch.

The American Fuel & Petrochemical Manufacturers is a trade association that represents 98 percent of the fuel refineries in the United States. Their former president, Charles Drevna, is now president and CEO of the Koch Industries-funded pro-fossil fuel lobby group called Fueling U.S. Forward.

NAM is also heavily tied to the Koch Brothers. They received $1.17 million in funding from the Koch brothers through their political funding arm, Freedom Partners, in 2012, and have fought greenhouse gas regulation, regulations on disclosure for “blood diamonds” and other conflict minerals, and regulations requiring disclosure of donors for political contributions.

Still, their initial victory is a beacon in dark times.

Despite what many fear the Trump administration will do for environmental policy, particularly after he tapped key climate change denier Myron Ebell to lead the Environmental Protection Agency transition team, these young citizens are a bright flame of hope for all of our shared future.