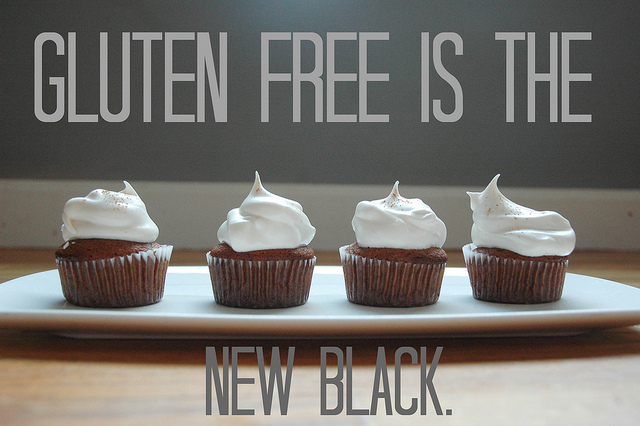 Everywhere we look it seems we’re being sold the concept of “gluten-free.”

For those of us who have had to avoid gluten for years due to serious health problems, labeling something like a package of plain almonds “gluten-free” is a bit weird. As much as I craved public support around this topic all my life, even I am now tempted to make fun—to ask the attendant at the metro, “Is this ride gluten-free?”

Perhaps a more striking example exists in the restaurant industry, which in 2012 named gluten-free a top three lasting trend. Lasting being the key word here.

While it might be a trend for some, however, it is a serious health risk for others (like me)—and it’s not often clear what’s going on, why, and who’s affected.

Who am I to tell you about this?

As someone who has been rebuilding my health, brick by brick, since I was diagnosed with celiac at age 25, I’m writing this to let you in on some of the finer points of gluten-intolerance, why it matters, and why the story doesn’t end with wheat.

I’m also writing this with strong encouragement from a Bali-based healer named Adolf Brown. Adolf worked with me to help me find a new level of health. He is a holistic chiropractor who uses a diagnostic system based on muscle testing called Applied Kinesiology. He sees hundreds of people every year, and he says a large percentage of both physical and mental problems stem from digestive issues, particularly those related to glutinous grains.

This gluten issue appears to be the root of a lot of other health problems I have heard about and witnessed over the years in myself, my family, my friends and my students. I hope the following five points help organize information in a way that empowers others to try out some dietary changes that just might improve their life too.

Five notions that may change the way we think about gluten, forever:

1. Gluten is actually a combination of two proteins that stick together when water is added, which gives wheat dough and bread its gummy, chewy consistency, respectively. These proteins—glutenin and gliadin—inspire a lot of research and are linked to hundreds of allergic and long-term immune responses, both systemically and localized to the digestive tract. Gliadin is a more widely-studied element of gluten than glutenin, because so far it’s linked to more symptoms.

2. Gliadin breaks down incompletely in more people than just those who suffer from celiac, and when it does, it produces gluten exorphins, which are now under the microscope for causing a range of symptoms, including a mimicked opiate effect, due to their ability to cross the blood-brain barrier. This explains why people who have sensitivity to wheat and other grains become fuzzy-minded and tired after eating it. It also implies damage to the nervous system over time, which has been noted in patients with chronic cases of celiac. (This is the reason I gravitated toward pranayama and practices that balance my nervous system.)

3. Gluten is at the root of three types of disease:

Celiac is a genetically-based auto-immune condition affecting one percent of the human population (in the USA, the confirmed estimate is that at least 80 percent of those affected are still unaware, so this is a low estimate for most other countries). It is the most serious of the three gluten-related conditions in terms of side effects and mortality rate. When people with celiac eat gluten, specifically the gliadin molecule, it passes through the small intestine without breaking down and is seen by the body as an invader. The body then produces antibodies to wage war against it, which damages the surrounding tissues in the intestines. This results in localized inflammation, extensive damage to intestinal villi, and intestinal permeability when the person eats gluten repeatedly.

Celiac is massively under-diagnosed. The reason it falls below the radar is because its symptoms number more than 300 and are not always directly pointing to digestion, nor are they consistent across those who have it. In fact, people can go most or all of their life without knowing there is a problem—even if they suffer many secondary diseases and symptoms, including a range of other auto-immune diseases. In some cases, it’s simply a matter of very low iron that might tip doctors off to a more serious malabsorption problem.

Gluten allergies are far less common than celiac, yet estimated to affect 0.1 percent of people. Those with gluten allergies produce an allergic immune response to gluten when they eat it. Unlike celiac, this is not the same as producing antibodies, and the body does not launch an attack within the tissues so much as produce a reaction in the form of hives, rash, watery eyes, difficulty breathing, and when serious, anaphylaxis.

Non-gluten sensitivity is the most ambiguous of these three gluten sensitivities in terms of diagnostics—doctors often miss it or diagnose it as something else based on one of its many symptoms—yet it is a real condition affecting roughly six percent of the human population. The symptoms are usually systemic and reduce when gluten is removed from the diet.

For the record, there are many proteins in wheat—among the 20,000-plus known—that are now under the microscope for their ability to cause reactions in the human digestive system. This is because they are not broken down entirely and, in their partial state as they move through the digestive system, are interpreted as other molecules and travel around the body “without a passport.” Thus they are often troublemakers.

4. The wheat we are eating now is extremely different from the wheat we ate 100 years ago. Until the 1800s, wheat plants waved in the wind at the height of an average person’s chin. In response to famines in various parts of the world last century, scientists aimed for higher yields, so they crossbred for smaller, densely-seeded plants to squeeze more food out of the same size pieces of land. Since the 30s, wheat and rye crops also underwent modifications to find strains that could resist herbicides. Most notoriously, in the 80s, a now commonly used strain called Clearfield wheat was developed to withstand herbicides sprayed to eliminate a weed that commonly infested the crops. The methods used to create this strain helped it to avoid being labeled a GMO crop; however, they do involve chemical mutagenesis, based on the application of sodium azide, a highly toxic compound.

In our agricultural efforts to supply enough foods, and due to the deregulation of the food market around 1980—which flooded it with many processed convenience items—people have evolved from eating simpler strains of wheat, in moderation, to eating any range of manipulated strains of wheat for breakfast, lunch, dinner, deserts and snacks. The exposure to the proteins in wheat, and how they break down (partially or totally) in the body is now a center-stage issue.

Improvements in diagnostics and awareness aside, the cases of celiac disease have increased four-fold in the past 50 years. This is not due to human genetics or increased wheat consumption as much as the different strains of wheat and how they have affected digestion over the last several decades, according to Joseph Murray, a professor of medicine at the Mayo Clinic in Rochester, Minnesota, USA. Sound research explores the impact of rapid, man-made changes to wheat strains over the past century and how they likely contributed to the increased incidence of diseases related to its digestion. Diet and hygiene both contribute to triggering those people who have a genetic predisposition to the disease.

5. As the title suggests, the term “gluten-free,” while it does signal that a product does not contain wheat gluten, does not tell us whether or not it is a “glutinous grain.”

“Gluten-free” technically just means wheat-free; however, there are other glutinous grains that can have serious impact on people’s health, including:

“It’s easier in many ways to think in terms of what is allowed: Red rice, quinoa, potatoes, amaranth and millet. Everything else give a pass for a month,” Dr. Brown told me. “A person needs a month to experience the difference and remission of many symptoms.”

Dr. Brown sees people (many of whom have tested negative for celiac) suffer from chronic back pain, joint pain, bloating, constipation, diarrhea, rashes, allergies, asthma, hormonal imbalances, kidney pain, autism, ADD, and even pre-senile dementia. These symptoms are alleviated by the removal of those glutinous grains from their diet.

When I went to visit him, after avoiding wheat gluten for 17 years (foods like breads, pastries, pasta, cookies, crackers, modified food starch, soy sauce), he did some body testing to see what foods my system likes and doesn’t.

Dr. Brown tested many foods that I thought were hard for my digestion. After we went through as many as I could think of, as well as glutinous grains, he looked at me and said, “Emily, you don’t have a problem with foods except these grains. Your story ends there.”

So I committed myself to a list he provided—after all the elimination diets I have done, this was actually still challenging! But I have now gotten the hang of it, and I have experienced incredible benefits, which reinforce why I am doing it and keep me on track.

My digestion has never felt so regular—ever. I had previously achieved stability in my system, but I am now experiencing ease (as opposed to dis-ease). Dr. Brown and I discussed how my condition is auto-immune, and how this condition also touches the mental sphere. I realized that when I cut out a lot of these grains, several anxious habits started to fall away as well. They return, like clockwork, if I cheat and eat these grains.

In the end, if you are experiencing mysterious symptoms that evade diagnosis, ask yourself:

What could a month off these grains show me about how good my health could be? What might knowing what I can and cannot eat teach me about self-care and respecting my own limits for the sake of my good health?