What Made America Great & How it Can Be Great Again. 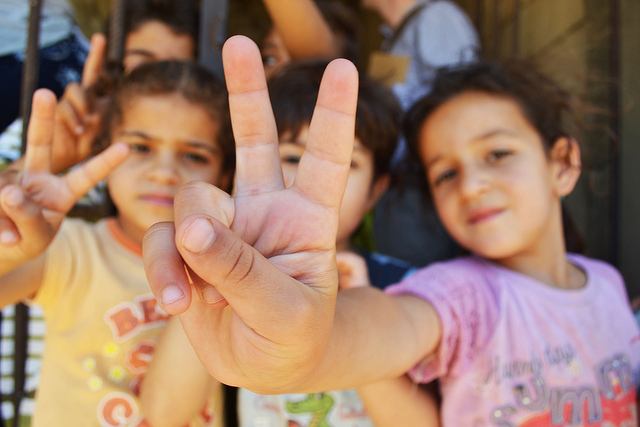 Let’s get real about immigration, refugees and “national security.”

I have just completed a two week visit to Germany, where I was teaching seminars. Since the start of the refugee crisis, Germany has integrated 1.2 million immigrants, mostly from Syria, into an pre-existing population of 80 million.

That is one lost, displaced, traumatized life restored for every 80 people. By now these new Germans are no longer in settlement camps, but are living in cities throughout the country, side-by-side with their hosts.

While in Frankfurt, I had to change my train ticket. The only time I had free was after dark. So I decided to brace the night air, and walked for half an hour to the train station.

The streets around the station, like Taunusstraße, are popular with recently assimilated refugees. You hear more Arabic spoken than German. I saw people laughing, obviously enjoying life. When I was confused about directions, I did not hesitate to stop and ask people. I was met with smiles and bright eyes eager to help me. The atmosphere was relaxed, inviting, and…safe.

A week later, I had the same experience in Munich. My train from Chiemsee dropped me at 11:30 p.m., and the next train on to Frankfurt was at 3 a.m. So what to do? I walked several blocks to find a hotel with an all night coffee shop and wi-fi.

The area around the station has a high concentration of immigrants, many from Syria. A few people asked me for money, which I had no problem obliging with. The “ask” was offered with such dignity, and even humor. Again, I felt quite safe and relaxed to walk through this refugee-dense area in the middle of the night.

Most of my friends in Germany have, in one way or another, been involved in “sponsoring” these newly arrived guests. Some have offered refugees their spare bedroom until they got settled. Others offered language lessons, logistical support, and even employment. The children of guests and hosts play together and become friends.

I talked to my friend and colleague Uwe Ratz about this. He is a psychiatrist with two young children. “Of course,” he said. “What else could we do? It is the only decent thing. These people are displaced, traumatized. We are, in contrast, highly privileged. If we refuse to welcome them it would be a violation of everything we stand for.”

In Chiemsee, I taught a seminar with about 30 Germans and Austrians from many different cites. So I asked them, “Since assimilating so many refugees, how has it been? Has the crime rate increased? Has there been an increase of homeless people on the streets? Has it been a drain on the economy or jobs?”

I was met with blank expressions; they could not even understand my questions. From a wide variety of German cities the reports were unanimous: the integration has been mostly positive—not only for the displaced guests, but for the welcoming hosts as well.

Witnessing the integration of so many refugees in such a short time pops two mythical bubbles currently touted in the United States by a gentleman sporting a loud mouth and strange hairdo, and his energized supporters. In contrast to Germany, the U.S. has integrated less than 10,000 refugees into a population of 300 million. That is one person integrated per 30,000.

Myth 1: Welcoming displaced people is dangerous. These refugees are not properly “vetted.” They are infiltrated with ISIS members.

In fact, Germany has witnessed less violent crime per capita, less gun related deaths, and less acts of terrorism per capita than the U.S. in the same time period. Most Germans who have now lived with Syrian refugees for more than a year welcomed and befriended them. They also find the idea absurd that disoriented people with no possessions or security should be seen as dangerous.

Myth 2: Integrating a foreign population means flooding the economy with uneducated and unskilled labor which will take jobs from the existing population.

In fact, those lucky ones who were able to flee from the atrocities in Syria were the more privileged and educated members of the population. They are doctors, university professors, engineers. They have much to contribute to German society.

There are real issues in the U.S., but they have had relatively little to do with integrating refugees. America does have frequent problems with violent crime, gun related deaths and frequent threats of terrorism.  But these have been perpetrated by U.S. citizens more than by recently integrated refugees. You are more likely to be killed by the police than by a Syrian immigrant.

And yes, America does have a problem with under-educated and under-skilled people within its population. Once thought of having the best educational system in the world, the U.S. now ranks #17 in the world, after South Korea, Denmark, Japan and many other countries.

But again, the very real problem of an undereducated and often misinformed population has little to do with immigration policy. Personally, I have heard the most astounding reports of gross ignorance and prejudice emanating from the people at Donald Trump rallies in the last year, and not from “immigrants.” Having doubts about that?  Check this video:

Part of the justification for closing borders and keeping people out has been to “make America great again.” But what made America once great was the spirit of these words by Emma Lazarus “Give me your tired, your poor, your huddled masses yearning to breathe free, the wretched refuse of your teeming shore. Send these, the homeless, tempest-tossed, to me: I lift my lamp beside the golden door.”

America’s primary claim to greatness has been its welcome of diversity, its rejection of prejudice, whether religious, ethnic or geographical.

On November 8th, it looks like we will likely witness the most crushing defeat of a political candidate in recent American history, a candidate whose unpopularity ratings have set records. But I think its time to give that guy a break now. No need to keep kicking and prodding when he is already down. It is clear by now, to people from both parties, that this is a sad little man, trapped in his own bubble of narcissism and ego-inflation, with relatively little self awareness and a penchant for sexual perversion. He needs professional help, not yet more scorn.

The crushing bi-partisan rejection we are witnessing now is not just of this one man, who will soon be forgotten. It is a rejection of the entire mindset he evoked in the dark underbelly of the nation: of unkindness, racism, divisiveness, and ill-informed prejudice.

It is a resounding rejection of everything that has threatened America’s one time greatness. It is a victory for the lesson that my trip to Germany exemplified: that kindness, welcoming and generosity are the only reliable foundations for real and lasting security in any society.