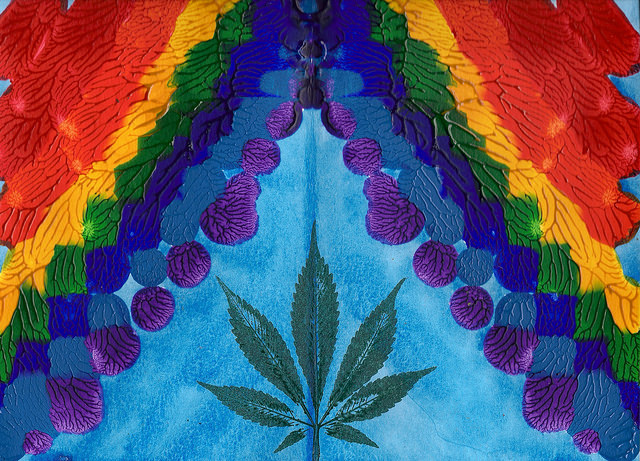 “Let me help,” she whispered softly. “I know what to do.”

And for once, I listened.

But for a long time I had wanted nothing to do with her. Despite a brief fling in university, Mary Jane and I had not been on friendly terms for quite a number of years. I held her responsible for a friend’s inability to cope with life—blaming her for distracting him from his path, for zapping his fire, for encouraging his deceptive behaviour. So, despite my chronically sore neck and shoulders, I wasn’t inclined to give her the time of day, never mind listen to her offer of help.

But that particular night, I’d reached a limit and was willing to try anything for a good night’s sleep. Pain and discomfort had prevented me from sleeping properly for months, and so, out of desperation, I let her in—only to see if she really could help.

Her soft touch wound its way along my body until it found the spots of tightness and tension deep below the surface, where other therapies had failed to reach. With relief and gratitude, I surrendered and lay back on the pillow, feeling the muscles unwind and soften, my skeletal structure re-aligning in response to the release of muscular tension. As she continued working, my mind quietened, worries drifting away along with the physical discomfort. I eventually fell asleep, waking with a clear head and lighter step the following morning.

Over time, my flirtation with Mary Jane developed into a more longstanding relationship. As I opened myself up to her, she reciprocated, and we got to know each other better. Like all relationships, some days were better than others. There were times when she was the last thing I wanted to see, but there were also other occasions when I couldn’t wait to be in her healing company again.

Marijuana evokes such passionate responses that it’s not an easy topic to write publicly about, especially as a non-expert. Many who read this will not come to the subject with an open mind, and others will come laden with scientific facts and figures. But I have worked with people in search of healing, as well as those who fearfully regard marijuana as a dangerous substance, and I can see that a more balanced and informed view is both needed and helpful. Sharing of experiences is part of the process of getting to that point.

On a personal level, my own journey with the plant has reinforced some of what I already know from shamanic work and from using other natural medicines and healing tools.

The intention we carry when using a plant has a large impact on our experience. This is as true for marijuana as it is for “heavier impact” plants such as Ayahuasca and San Pedro. My intention in using the plant was for healing, so I used it initially in a quiet, almost meditative-like, space where I could focus on the subtle shifts and changes that it was creating in my body. This was a safe space within which I could have my own, very personal, experience of the herb without fear or interruption.

Initially, I noticed that the plant had a natural way of zoning in on specific areas of tension in the body. It seemed to automatically know where to go. Over time, by watching where it went within my body, I became more aware of the unconscious patterns of tension that I hold. And by observing and being open to the experience, I learned where I most needed to direct my conscious efforts at releasing tension. I began to use this understanding during the day to deliberately realign my posture and to respond differently to stress—with good results.

As the months went by, I also began to explore other ways of using the plant in a healing manner. Knowing that it has long been used by Sadhus in India as a way of deepening their connection with the divine (and perhaps, as a way of alleviating the hardship of asceticism), I used it to seek clarity on a variety of subjects, from creative direction to emotional challenges. It rarely failed to provide what I was looking for, although it has to be said that the answers would probably have presented themselves equally well in other forms of meditation.

Marijuana, as with meditation, dulls the “noise” we all carry that blocks our ability to hear guidance. It felt to me as if the extraneous distractions went out of focus, leaving a tunnel vision on the issue at hand. It may be difficult to focus on more than one thing at a time when under the influence of marijuana, but it is equally difficult to get in your own way, as the ego takes a back seat.

Not all strains of the plant have the same effect, however, and different personalities respond in different ways to the effects of the plant. As an introvert, I may like the chatty side of my nature that emerges under a Sativa, but I am much more comfortable with turning inwards, and Indica strains were better suited to what I wanted, seeming to work more deeply on the body than Sativa strains do.

And of course, alongside the deeper experiences were the broadly-acknowledged short-term side-effects of marijuana—the appetite stimulation, the altered perception of time and the odd fit of the giggles.

In the years that have passed since Mary Jane and I were re-acquainted, I have realised that she, like others, doesn’t hold all the answers. The ease she brings doesn’t always provide a long-term solution from my experience, although there are those with a more scientific explanation who would argue that she can, given the correct therapeutic approach (regular administration of oil as opposed to occasional vaping of dried herb). And her ability to quickly put someone at ease makes it perhaps too easy to turn to her for every small niggle as opposed to developing deeper resilience—although I consider her infinitely preferable to alcohol for acute stress relief.

But the insight she offers into the body and the psyche can provide a foundation from which to embark on a journey of full healing for those who can use her with discrimination—using her guidance along with the support of other therapies as necessary.

It is also clear that many of the issues that surround her are more of humanity’s making rather than inherent in the plant. If we have a problem with her, it is because our relationship with her is unhealthy. As with all relationships, whether human or non-human (and we have relationships with food, substances, careers, gadgets and even social media), it is our ability to engage in them in a healthy manner that determines how positive they are for us. If we are highly dependent on another (plant or person) in order to deal with everyday life, or as a regular crutch to see us through, it is usually ourselves we need to look at rather than the other.

For me, marijuana now sits, metaphorically-speaking, in my medicine cabinet as an alternative to a chemical painkiller, in my larder as an alternative to a glass of wine on a Friday night and in my creative armory as another muse when she is needed. She can be teacher, friend, comforter and healer, depending on our need. And she is one of the sacred plants of this earth. The sooner we clean up our collective relationship issues with her, the sooner she can be of service to those who need her.