Three Secrets to Seeing the World in Style. 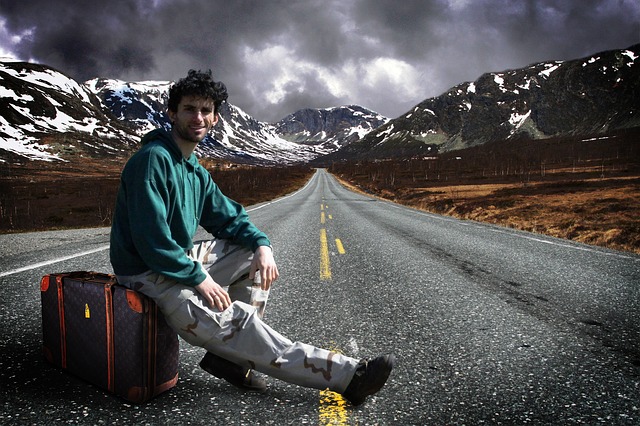 I am 66-years-old and haven’t seen much of the world. But I am a fast learner and would like to share some really cool travel tips. I would like to hear yours in the comments section below.

While I have never dined in Paris, watched the Northern Lights from a hot tub in Iceland or visited New Zealand, I have done a lot of internal work, meditation, and self study. Now, after 30 some years of self realization, it is time to make love in Spain, see kangaroos and koalas in the wild and leave my shoes at the door of a home in Nagasaki.

This sudden desire to see the world appeared one day, and I have been on the road a lot since.

Here are a few suggestions in case it is time for you to travel.

It was scary stepping off the plane onto the tarmac in Panama. I didn’t speak the language, didn’t know a thing about the culture and was a green gringo.

I had no interest in being a tourist. So I adopted the country as it embraced me.

A tourist visits, gawks or ignores, hangs out with other tourists and isn’t really present.

Not being a tourist meant not staying in a hotel in Panama City, but instead flying to David on Copa Airlines, and then from there taking a taxi 25 miles more to a small town.

Not being a tourist meant being a local. To be a local get curious about where locals hang out, what they eat and how they think. Mix with locals instead of just with people who are also as out of place as tourists can be, visiting instead of really living there.

>> Second Secret: Eat better than ever.

We quickly found the best ground beef I have ever had at Romero’s tiny supermarket in Boquette, and hydroponic veggies are cheap and plentiful at many farms. We ate oodles of fresh produce, so good it didn’t need dressing. Huge papaya for a dollar a piece at a roadside stand is enough to generate a sustained smile and a happy belly.

Coffee is everywhere in Panama. It’s growing, being roasted and brewed with nuances of flavor without a Starbucks in sight.

Eat like the locals eat to be less of a tourist. This deepens your taste of the culture and rescues you from the sugariffic muffin and raspberry yogurt the airline serves and is worth leaving alone. While your growling stomach may require you to pick at the scrambled eggs and chicken international flights may offer, it’s healthier and fun to bring along your own nuts, flax crackers, dates, figs and dried mangoes.

Tourists often use vacation as an excuse to eat poorly. Don’t do it. Eat better on vacation to have a better vacation.

My travel companion, Elizabeth, caught the traveling bug early. In fact, she has seen much of the world and makes everywhere she goes her home. Sometimes I wonder what she is running from; other times I just bask in her smile as she speaks of foreign lands with familiarity and excitement.

“When you have been in a place for 11 days, then it is as though you have lived there forever,” she insists. And she would know. Perhaps she isn’t running from anything, but instead running toward unique experiences—like marrying a Jamaican man after only knowing him for a few weeks or lounging in Croatia years before tourists arrived—and in the off season of course.

I am in the process of confirming her 11-day proclamation, and having a great time doing so. Tourists come and go, but temporary locals put down roots, feeling the dirt between their fingers, the air in their nostrils and above all discovering what is important to the people of a new place. The locals hold the key to a place, and they often don’t even know it.

Being in a foreign land makes it home.

To wake up in the morning in a foreign land can be scary and exciting. Being present makes the difference, because it makes us curious noticers of the view from a hotel window, the types of flowers or bird songs that a new place offers or the sounds and smells of a land we have never visited before.

Countries have individual sensations. Panama is hot and rainy, and the people are warm and loving. New Zealand offers big island culture with countryside so various and ocean fronts everywhere. The people are fiercely individualistic, but also charming.

Tap into the essence of a country by noticing what you see, hear and, especially, feel as you walk the streets, hillsides or beaches aimlessly. Ramble. As Dorothy said. “There is no place like home.” But, a foreign land can be home too, even though it “isn’t Kansas” anymore.

Make the most of your travels by being a local instead of a tourist, eating local/wonderful/healthy food and staying put long enough to really get a sense of your new self in a new land.
~