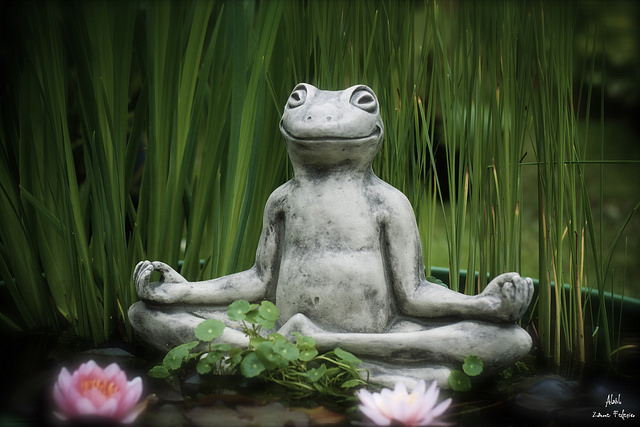 I have been buying page-a-day Zen calendars for years.

Each day, a new, thoughtful and calm-inducing quote greets me as I enter my office. And oftentimes, the quote will perfectly address whatever is happening that day.

One year, I sent Zen calendars to my family members as Christmas gifts. I found the calendars so helpful, and I hoped my family would benefit from them too.

Shortly after the holidays, one of the gift recipients told me he had given the calendar away. He wasn’t comfortable keeping it because it felt blasphemous in some way. Zen—or yoga philosophy—was, in his mind, in direct conflict with Christianity because of its supposed Buddhist and Hindu roots. One could not be a Christian and also read about or practice yoga.

I guess I should have expected this reaction, but I was still saddened by his choice to give away the calendar. I didn’t say anything more about the incident. At least he was honest enough to tell me, as it’s possible that my other Christian family members had also thrown my gift in the trash.

Similarly, I wonder if the hesitancy of some yoga students to explore yoga beyond gentle yoga or hot yoga classes is because of similar religious concerns. They acknowledge the body benefits of yoga, but hesitate to explore its spiritual aspects.

With these musings in mind, I happened upon the following quote on my page-a-day Zen calendar:

“I don’t know whether I believe in God or not. I think, really, I’m some sort of Buddhist. But the essential thing is to put oneself in a frame of mind which is close to that of prayer.” ~ Henry Matisse

Matisse’s quote suggests that although he is not sure about the existence of God, he values a prayer-like frame of mind.

This made me wonder—isn’t there some way for us to help Christians be both devout and yogis at the same time? Aren’t the two pursuits more similar than not?

So I googled “Christianity and yoga” and found the following quote on the YogaFaith website:

Well, that is a relief—because this particular WASP does Zumba.

So I set off to explore the similarities and differences between yoga and Christianity a little further:

Similarities between Christian and yogic philosophy.

Focus on Kindness. Jesus said, “Do unto others as you would have them do unto you.” (Luke 6:31) Buddha said, “Be kind to all creatures; this is the true religion.” Both quotes are used as the basis of their respective philosophies, and they are very similar sentiments. Enough said.

Prayer and Meditation. Prayer and yoga-induced meditation resemble each other. Christians may experience a meditative state while praying—and yoga practitioners who chant mantras resemble Christians reciting prayers like the “Lord’s Prayer.” So there are similarities between prayer and meditative practices as well.

Could the prayerful be helped by stilling their minds through a meditation and yoga practice? Maybe. The meditative state yoga invokes likely benefits the religious practitioner and non-practitioner alike.

Yoga does not contradict the story behind any religion, but instead asks the practitioner to look within for understanding of their place in the universe. This introspective journey does not negate that of Christianity and can co-exist with any religion—especially if the person’s internal guidance directs them to “go to church.”

Differences between Christian and yogic philosophies.

Life after death. Yoga and Christianity do differ in some ways. Christianity specifies a path to life after death, which is quite focused on “heaven” as the outcome. However,  yoga suggests refraining from attachment to a particular outcome, and being in the moment, rather than striving for something in the future.

Pema Chödrön illustrates this in her quote, “Whatever is happening is the path to enlightenment.”

This idea is probably a bit off-putting for some, but does not preclude the pursuit of yoga by the devout. It just asks for them to consider experiencing their lives as they happen, rather than thinking about the past or future. Something, perhaps, we all could benefit from these days.

In contrast, yoga provides the list of restraints and observances, the Yamas and Niyamas, shown below. They were created to help yogis lead a more peaceful and tranquil life—not to specify a clear right and wrong.

Interestingly, the Yamas are quite similar to some of the Ten Commandments, as noted in the associated parenthesis, but they are more like guidelines rather than rules.

1. Ahimsa—nonviolence, non-harming other living beings (similar to “Thou shall not kill.”)

2. Satya—truthfulness, non-falsehood (similar to “Thou shalt not bear false witness.”)

3. Asteya—non-stealing (similar to “Thou shall not steal.”)

4. Brahmacharya—self-control, celibacy (similar to “Thou shalt not commit adultery.”)

5. Aparigraha—non-avarice, non-possessiveness (similar to “Thou shalt not covet.”)

In contrast, the Niyamas or “observances” are quite different from the remaining five commandments, which focus on honoring God and parents, not taking the Lord’s name in vain, not erecting false gods and observance of the Sabbath.

But possibly, the Niyamas could be acceptable for Christians as well. After all, who doesn’t like a clean, content and disciplined student? (I would have one at home if my teenage son could remember to bathe every day.)

So despite some differences in the purpose of the guiding principles of both philosophies, Christians could find benefit in observing the Yamas and Niyamas as well as the Ten Commandments.

We are more alike than not.

As I come to the end of this analysis, I realize that real Christian and yogic philosophy experts could explain the similarities and differences in the philosophies more accurately. But hopefully, this article has helped illustrate that we Christians and yogis are more alike than different, which hopefully will encourage further yoga exploration. (And prevent the re-gifting of page-a-day Zen calendars forever.)

“I believe deeply that we must find, all of us together, a new spirituality. This new concept ought to be elaborated alongside the religions in such a way that all people of good will could adhere to it.” ~ The Dalai Lama