I feel like it crept up on me slowly—and I blame social media.

I was a teenager just a few years before Myspace and Facebook entered the scene. I didn’t know what a luxury it was then, but I’m so grateful that I had the opportunity to navigate emotions in my room for hours and days on end without an internet platform to display them on.

I was already a fairly intuitive and opinionated teenager who took to writing some very raw letters and poems directed at whomever I believed had wronged me. I can only imagine how much more of a pretentious snot I would have been if I’d been able to publicly announce any of my thoughts about heartbreak, friend drama, or family problems online. My opinions, justified or not, were still just opinions I’d throw on paper to get out of my system, and I doubt that 16-year-old me would have had the wisdom to keep them private over her own need to be heard.

So, it was truly a blessing that the most I could do was leave a cryptic AOL “away message” with some Nirvana lyrics on the family desktop. Then it was off to my room to blast music, write venomous journal entries, or make a creepy scrapbook dedicated to an ex-boyfriend. If I really wanted to get a message across, I couldn’t hide behind a screen. My options were to call or speak to this person face-to-face, and since both seemed terrifying or futile, I’d opt for the silent treatment or a three-way phone call with best friends instead.

I don’t know, maybe I was always a bit manic—but the advantage of pre-social media life was that I could go all in, deal with my issues, and then move on.

I recently realized that social media was making me consistently manic. I believe it was a progressive issue, having started with LiveJournal (the online diary) when I hit college, then made worse by Myspace, and finally Facebook. I’m sure there were a lot of contributing variables, but I feel that timing had a lot to do with it. At college I had the freedom of an adult, but I was still a teenager alone in a new city like everyone else. And then we all had these websites that became the ultimate way of fitting in.

That’s how I got stuck in social media. But here’s why I got out.

For two years, I’ve been living my dream of volunteering overseas. I experienced a lot of mental turmoil, but kept chalking it up to things like culture shock, homesickness, and transition periods. As it turns out, it was just Facebook.

Initially, Facebook was going to be my lifeline for staying in touch and sharing my journey, but two years and 25 self-help books later all it really did was go against every mentally healthy tenet of sanity I knew to be true. I believed in golden nuggets such as: live in the moment, don’t compare yourself to others, and time will heal all wounds. I had made my dream a reality, but I was so lost and disheartened by the fact that it didn’t feel like it. And then it hit me, thank goodness, that Facebook was preventing me from living in the present. I was continuously staring at a screen and nostalgically dangling from the people and places I used to know.

It struck me that even though I was the one who left the country, I was probably the furthest from moving on.

That epiphany made me certain I had to delete my Facebook account. Doing so felt like an existential crisis at first, which made it all the more clear that it was a serious mental hazard. And then, I couldn’t wait to get rid of it. I didn’t want people to have superficial and easy access to my entire life anymore. Living my dream was still my reality, and I craved real support. This meant I didn’t want hundreds of people deducing that I was riding jeweled elephants in a Bollywood movie just because of peachy status updates. I didn’t want to see my exes with new girls, my friends with my exes, or anyone enjoying the old life I missed. And I didn’t want the added burden of showing my support with a grown-up “like,” when I didn’t like that sh*t at all.

The wisdom I acquired from self-help books and my study of Buddhism was never going to have lasting effects with a Facebook account around to keep my insecurities lurking and my ego alive. It let, and therefore I let, relationships that were never built on solid foundations continue to shake up my inner peace. It kept me from practicing humility and it perpetuated the inauthentic relationship dynamics I didn’t want in my life anymore.

I wanted my new page to be a blank canvas in the hopes that my mind would follow suit. That’s why there’s no wall posting allowed and only a link to my monthly blog. I’ve done some behind-the-scenes work too, which meant following almost no one except a Buddhist nun, Ellen DeGeneres, and Saturday Night Live—basically, anything that doesn’t induce a panic attack.

I’ve also made use of the feature that allows you to be connected on messenger without being friends, much the way you might put someone in a phone book. It’s not that I don’t want friends, I just want to appreciate the art of becoming friends first. Now we can send a message and reach out to each other naturally. The seeds of friendship can blossom, wither, or linger on their own. Our deepest values, politics, and other deal breakers can remain a mystery until our awkward lunch date when someone discloses their theory about how vaccines cause tsunamis.

Will I ever take another selfie? Probably. But the point is that I needed to set boundaries for myself, and so I took action. This is an area I need to work on in general, and the internet was a good place to start since it’s more controllable than complicated real-life matters that require more thought than clicking a delete button.

“Out of sight, out of mind” is an idiom that may be misinterpreted as a cheap way of avoidance, but when used correctly, it’s a healthy way of making space for the things we should not be avoiding—like the present. I’m not trying to abandon my past, I just don’t want Facebook to be the route that takes me there anymore. It felt like a call that placed me on hold for too long. I didn’t want to risk losing my spot, but I knew hanging up would be more productive than waiting around.

When I hung up on Facebook, it felt like I finally had both feet in, right here. The voice in my head became less obsessive and I saw glimpses of my high school self, who knew the value of spending hours in quiet contemplation. Yes, I still enjoy a gander around the Facebook block. It has its perks, like funny videos and adorable pictures of my nieces and nephews. It’s a platform for sharing our lives and thoughts (like I’m doing right now), and that’s a beautiful part of life. I’ve just rediscovered that my mental health flourishes best behind closed doors, inside journals, and with the closest of friends.

I’ve also uncovered something new. When I let real life become the metric I use to measure my relationship with myself and others, identifying what to keep or let go becomes more natural and less cerebral. The past and present don’t seem so separate anymore, and in their merging I’ve been experiencing that elusive “in the moment” feeling I’ve been missing for so long. 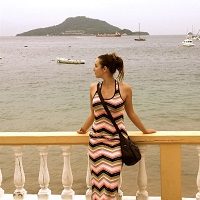