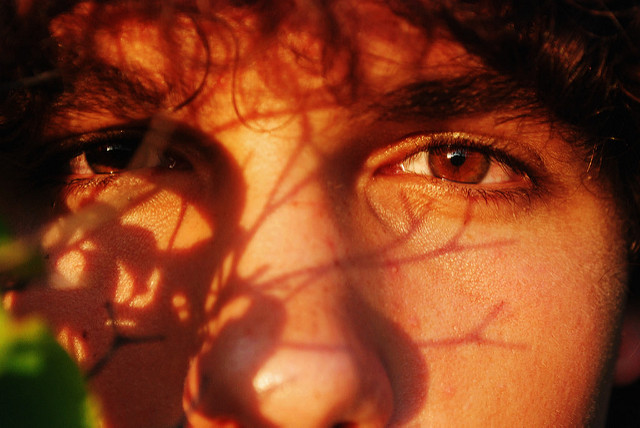 When I was in junior high, I fell in love with a handsome engineer who was twice my age.

My father knew “M” from work, and he had invited him to live with us for a while.

“He’s Italian,” my dad explained. “He doesn’t have any family here. He almost died in a car crash and needs a place to recover.”

So, my sister and I moved out of our bedroom and turned it over to this visiting stranger, while my mother brought him Italian chicken soup on trays—and I covertly watched as he hopped to the bathroom in his unbuttoned, striped pajamas, with huge, white, plaster casts on one leg and one arm.

It’s incredible how the world narrows down when you fall in love. How it just doesn’t matter whether you actually pass that test in math, or whether that boy at school knows if you exist, or whether the sun will rise the next day.

What matters is unbuttoned, striped pajamas.

The truth is, I don’t remember much about M or about the reality of what it was like to have him in the house on a day to day basis.

I just remember bits and pieces.

I also remember that I spent lots of time fantasizing about M and about how he was educated, intelligent, liked pasta, and was going to save me from the future I had up to then been condemned to follow.

Of course, M didn’t have any idea that he was going to accomplish all this for my sake. In fact, while he and I were aware of each other in the house, I don’t think he really knew exactly how I felt about him.

However, I think my mother knew, because she wouldn’t let me near him.

I remember the awful day I came home from school and saw M’s bags packed in the living room. I also remember seeing his cast-free arm waving goodbye to us out of the top of the new Triumph sports car—the one his fiancé had driven all the way out to California to pick him up in.

While my mother seemed relieved to see him go, I felt like I was watching my life drive away.

All through high school, I kept alive the hope of M returning. I told my girlfriends about him. I dreamed about him. I played Tchaikovsky over and over.

Then, one night—four years later, when I was a senior in high school—my parents had M over for dinner.

I had spent days obsessed with seeing him again, and when his eyes met mine across the table that fateful evening, I saw something in them I hadn’t seen before.

About a week later, he called me up and asked me out.

I loved everything about that night. I loved that he told me to let my hair blow in the wind as we drove with the top down on Pacific Coast Highway. I loved how it felt to have him right there, close enough to touch. I loved how the surge of the car changing gears made me surge inside, and how he reached out and took my hand.

I especially loved how he walked me up to the door and put his arms around me and finally—finally was going to kiss me.

That is, until my mother opened the door.

“Hi. You guys are home early aren’t you?”

As it turned out, I never saw M again after that night.

I learned, eventually, from my mother that M had married his New York fiancé. In fact, my mother had known that the wedding invitations had already gone out the night that he’d taken me out for our “date.”

“I couldn’t let you get more involved,” she’d said. That was why she’d waited behind the door.

She knew he never intended to see me again. She also knew that with a kiss, I would have been even more heartbroken than I ultimately was.

Of course, the hormonal girl in me would have preferred the kiss.

I grieved over losing M—or maybe not so much over losing M as losing my dream; a dream that was made of curly hair and dark eyes, homemade Italian chicken soup, unbuttoned pajamas, and convertible Triumph sports cars.

However, in the end, there was one thing I never did let go of.

To this day, I can never hear Tchaikovsky’s First Piano Concerto without thinking of my romantic engineer.