An Amazing Thing You can Get from a Waitress that You Can’t Find on a Menu. 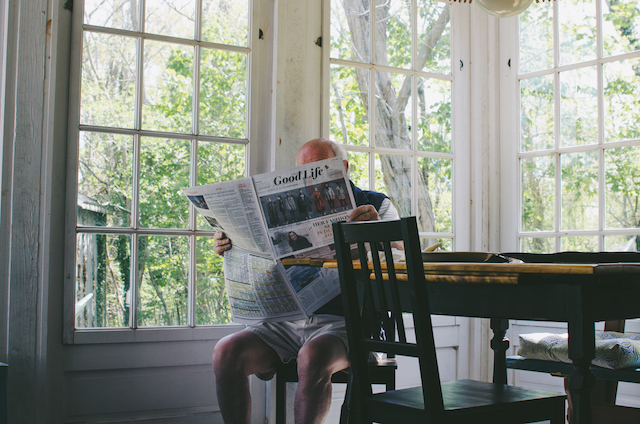 “All the lonely people,

Where do they all come from?

All the lonely people

Where do they all belong?” ~ The Beatles

I was in a “mom and pop” breakfast-type place when I noticed a gray-haired, slightly bent-over older man somewhere between 75 and 80 years old having breakfast alone at the table next to me.

“You’ll have the regular?” the dark haired, sparkly-eyed waitress asked him in a friendly way.

It was obvious that the man was there often.

I noticed how when she spoke with him, her eyes glancing around the dining room occasionally to see if there were others waiting for her, the man kept her at the table with banter, joking with her while she joked back.

I noticed that his hair looked like he hadn’t combed it.

I noticed that she didn’t seem to notice that at all.

My breakfast arrived, and I didn’t look back at the man until I saw him stand up to leave.

“Can I have my kiss?” he asked the waitress, holding a shaky finger to his cheek.

She held the hot coffee pot out of the way and leaned toward him.

“Of course you can,” she said, pursing her shiny, red lips and kissing him on the spot he had pointed to.

She laughed and he laughed, and I commented to them both from where I was sitting something along the lines of, “Who wouldn’t want a big, red kiss mark on their cheek?”

“I’m leaving it there,” the man said. “If anybody mentions it, I’ll just tell ‘em, ‘Eat your heart out buddy.’”

“He was lonely,” I thought. The words marched through my mind, cutting through to my heart. He wasn’t some kind of lecherous old guy being improper. He was lonely and in need of touch.

When she came over to my table, she nodded her head in his direction, the hot coffee pot still in her hand.

She didn’t really know him or know all that much about him.

“You can tell,” she offered. “In my business, they come in here all the time. They don’t need the bacon and eggs. They need the company.”

For so much of my life, I have looked at people like the man the waitress kissed on the cheek and seen them as “the retired ones.” The ones with all the perks. The ones with the wife of 30-plus years, the big car, the paid off mortgage, and all the friends.

I’ve haven’t typically seen a man like him as needy, or especially as “lonely.” For some reason though, the waitress’ simple kindness toward this particular man—in the middle of what was obviously a busy morning for her—made visible to me what had been invisible, and I looked at the man with new eyes.

Maybe he’d lost the family and friends that he was once close to. Families are mobile these days and often no longer live close to each other; they work long hours and don’t have enough free time for themselves let alone for others.

Maybe he’s not well. Poor health—or poor mental abilities—can be intimidating to others.

The loss of a spouse, loss of job, loss of income, and loss of the ability to get out and socialize are all isolating events.

Maybe I hadn’t been broad enough in my assumptions about the old man. Maybe he had more losses than I had wanted to think about.

“It’s really kind of you to be so friendly to him,” I said to the waitress, adding that I had been touched by what she did.

“We need kindnesses like that in this world today.”

“Nah,” she responded. “It’s really nothing.”

She asked me if I wanted more coffee and then, just before she walked away from the table, turned back for a moment.

Besides,” she said softly, “It’s an easy thing to do and seeing him happy makes me feel good.”

Within a moment, she was standing at another table chatting just as amiably with the older couple sitting there as she had with the old man.

“When I was a kid, I was very lucky to have a real cool dad, a working-class gent, who always encouraged us to give up our seat on the bus for old people. This led me into going round to pensioners’ houses. It sounds a bit goody-goody, so I don’t normally tell too many people. There were a couple of old ladies and I used to go round and say, ‘Do you need any shopping done?’ These lonely old ladies were something I knew about growing up, and that was what ‘Eleanor Rigby’ was about—the fact that she died and nobody really noticed.” ~ Paul McCartney