How I Stopped Interviewing Everyone I Met & Started Connecting.

In my early 20s, I began to notice my tendency to interview people I met, rather than having a two-way discussion.

I had been expressing myself through the written word for years, yet I was often reluctant to speak with a new acquaintance for the first time. I was friendly, but friends didn’t become friends until I took the time to speak deeply and personally with them.

In my youth, I was quick to notice the judgmental and gossiping temperament of many girls my age, and so around them words didn’t flow so freely. I often had more guy friends and only a few close girl friends who wanted to share adventures and marvel at the universe, rather than secretly discuss our peers.

When my teens dissolved into my 20s and I began moving around a lot, I encountered a more diverse group of people. I spent time, on and off, living in a popular ski town where travelers from the world over would come to stay for only a season or two.

It was there, in the midst of a thousand new faces each day, that I became aware of the difference between those who actually knew themselves, and those who had never listened to their own heart. It took several years of talking with, or rather listening to, many new people I met.

Back then I partied a lot—it’s just what happens in ski towns. But by the end of my third consecutive winter, I found I was arriving home early in the morning exhausted not from dancing, but from listening to the whirlwind of soap operas that seemed to be going on around me. I had been unintentionally practicing my interview skills, because so many of the folks around me only knew how to talk about themselves, or in most cases, the current dramas in their lives.

I had those moments too—I know I did. My closest high school friends could easily provide a list of nights where I, armed with a bottle of vodka or Growers Cider, cried my life-ending dramas upon their tired ears. But that’s what high school is for, right? So we can feel insanely lost at the beginning of becoming our own person, and then look back one day and laugh…or cry…but definitely laugh.

That’s why after graduation, I skipped town. And maybe it was the immense natural beauty I surrounded myself with that surged me forward into bigger contemplations and ideas.

Hiking up narrow and steep mountain sides, waist-deep in fresh snow with more blowing sideways into your eyes, and your snowboard on your back, following the exact steps and footprints of your friend in front of you until you finally, breathlessly, breach the peak’s top edge and collapse, panting and gazing out at the tumbling expanse of mountains that roll in every direction—consuming the entire horizon as far as the eye can see.

Those days changed me. Those views changed me. How could humans remain stuck on the “he said, she said” seesaw of pointless conversation when places such as this were there for those humble enough to zip their lips and open their eyes?

Throughout my years in the mountains, I made several great friends whose company I still miss today. I realized that they stuck out because when we spoke, I didn’t have to interview them.

I’m always slightly leery of new acquaintances who so smoothly glide from introductions into the detailed story of yesterday’s explosive yelling match with their total-dick-of-a-boyfriend, or the over-the-top account of their roommate’s recent breakdown. I appreciate honesty, but when I find myself 15 or 20 minutes into a “conversation” where I’ve only been nodding along as the other flaps their gums openly and consistently, I can’t help but wonder if they are indeed thriving off the drama they so willingly report.

After three years, I traded the ski town for the cluster of West Coast islands that are my home.

Still not one to voluntarily speak about myself, I happily disregarded the judgmental gossips I encountered, and began finding those souls who also preferred to discuss the ocean, the moon, artistic pursuits, and personal growth. Who would rather put on a record than put on a movie. Who’d rather walk barefoot on the beach than post hashtags from the newest restaurant.

It was, and still is, a refreshing lesson that what we emanate does indeed come back to us. There is no question that everything on this Earth is made up of energy. Humans included. Trees included. Cars and books and chocolate included. All different energy, but energy just the same.

How we act, where we focus our efforts and thoughts, does not go unnoticed. Even if we are home alone all day, the universe (or God), is always listening—always picking up what we’re putting down.

After years of never sitting still and being constantly surrounded by an always-shifting rotation of people and energies—their perspectives, personalities, and over-all “vibes”—I learned how important and beneficial it is to control who and what I allow into my life.

I do believe the time I put into talking and listening to the souls who were tangled up in their personal soap operas did me some good.  And now, interviewing is part of the job. I have discovered those beautiful people who also want to climb mountains, count stars, and listen to the wind, rather than gossip or complain about others, whom we ultimately have no control over. The only thing out here that we can control is our own life—who and what comes into it, and who and what moves away from it.

How magic that really is, to understand the power we hold over our own existence.

Find those people who will nurture you and your journey, and drop those whose energy drains you. The world around you will change as you understand that no person can ever control another’s actions, that talking behind someone’s back accomplishes nothing, and that no two people will ever hold exactly the same points of view, as no two people will ever live the exact same life.

It’s time that we stop feeling like an exhausted interviewer after every conversation, and instead start making room in our lives for those who lovingly speak, but also listen. They are as rare and beautiful as a deep winter sunset, but when we’re ready, they will appear. 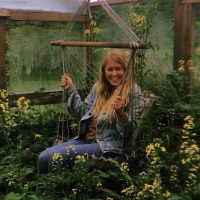 Alexis Koome was born and raised on unceded Coast Salish territory of the Lkwungen (Songhees and Esquimalt) peoples. For years she wandered restlessly living in trailers, sail… Read full bio