Pope Francis all but Dropped the Mic in his TED Talk. 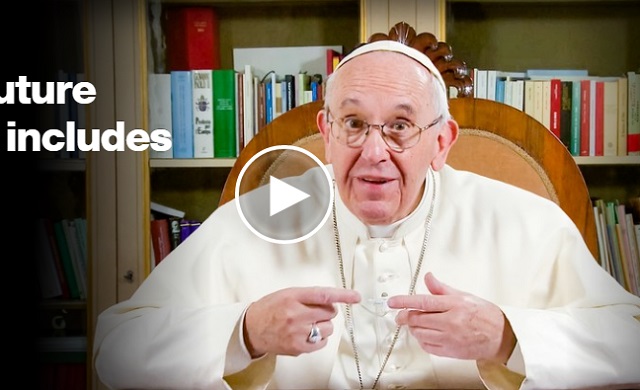 “The future of humankind isn’t exclusively in the hands of politicians, of great leaders, of big companies. The future is, most of all, in the hands of those people who recognize the other as a ‘you’ and themselves as part of an ‘us.'” ~ Pope Francis

Growing up as a Catholic girl going to Catholic schools, I heard a lot about the Pope.

He was God’s representative on earth, the head of the church—he was infallible.

I have to admit, it was hard to feel warm and fuzzy about a so-called “holy father” who was infallible. Feeling afraid was more like it.

Then, more than a half century later, a pope like Francis comes along. What a breath of fresh air! He washes people’s feet. He says, “Who am I to judge?” He gives TED Talks. It did take a year of negotiating to get him there, but that’s okay. It wasn’t because he didn’t want to, it was because he was busy.

Besides, Francis is known for his media savvy and probably also knew exactly what he was doing when he finally put the TED Talk in his schedule.

“He has 10 million followers on Twitter alone, and regularly records videos for specific audiences. But the TED world, with its heavy focus on science and technology, is an interesting choice and signals his willingness to spread his message far and wide.”  ~ Washington Post

When he appeared on screen at the international TED conference in Vancouver the audience, filled with scientists, academics, tech innovators, investors, and cultural elites “erupted into applause.”

Leaving behind a specifically Catholic message, the Pope brought a universal teaching to the world in words that could have easily been used by the leader of any faith.

For almost 18 minutes, he spoke in Italian, gesturing frequently in a “folksy TED-style manner,” while looking directly at the camera.

These are the most powerful points he raised in his talk that stuck with me:

We are all connected:

>> Each of our existence is deeply tied to that of others—none of us is an island, an autonomous and independent “I” separated from the other.
>> Life is not merely time passing by, it is interactions with one another.
>> We can only build the future by standing together and including everyone.
>> Happiness is harmony between the whole and each single component.
>> Even science points to reality as a place where every element connects and interacts with everything else.

Solidarity can change the future:

>> Our default attitude in political, economic, and scientific choices needs to be solidarity.
>> The culture of waste doesn’t concern only food and goods, but also people.
>> Solidarity is a free response born from the heart of each and every individual.
>> Anything can be accomplished in solidarity.
>> Each and every one of us can become a bright candle, a reminder that light will overcome darkness, and never the other way around.

The name of the future is hope:

>> Hope is not optimistic naivety that ignores the tragedy that humanity is facing.
>> Hope is the heart that doesn’t lock itself into darkness, that doesn’t dwell on the past and doesn’t simply “get by” in the present—it is the door that opens onto the future.
>> Hope is the hidden seed of life that develops into a large tree, the invisible yeast that allows the dough to grow and that brings flavor to all aspects of life.
>> A single individual is enough for hope to exist and that individual can be you.
>> From that “you” will come another “you” and another “you” that turns into “us”—when there is an “us,” there is a future of hope.

The revolution of tenderness:

>> Tenderness starts in the heart and reaches into the eyes, the ears, and the hands.
>> Tenderness sees and hears the other, the children, the poor, and those who are afraid of the future.
>> Tenderness listens to the silent cry of our common home: our sick and polluted earth.
>> Tenderness comforts the other and takes care of those in need.
>> Tenderness is the path of choice for the strongest and most courageous men and women, for tenderness is not weakness—it is fortitude.

With power comes the responsibility to be humble:

>> The more powerful we are, the greater our responsibility to act humbly.
>> If we are not humble, our power will ruin us and we will ruin one another.
>> “Power is like drinking gin on an empty stomach. You feel dizzy, you get drunk, you lose your balance, and you end up hurting yourself and those around you if you don’t connect your power with humility and tenderness.”
>> Through humility power can become service and a force for good.
~

“In this complicated and often confusing world, Pope Francis has become possibly the only moral voice capable of reaching people across boundaries and providing clarity and a compelling message of hope.” ~ Bruno Giussani