The Guilty Pleasure I No Longer Feel Guilty About. 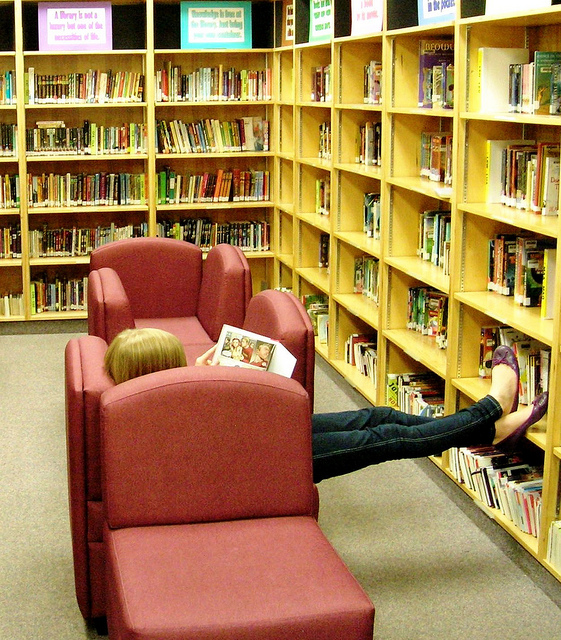 “Cousin Lily is going to loooove these,” I drawled to my mom, who raised her eyebrows at me.

I was 25, standing at a cash register at The Bookstore Formerly Known as Borders. I laid a small stack of Sweet Valley University Thriller books on the counter and pulled out my wallet.

I tried to keep a straight face, while summoning the image of a young teenager with glossy dark hair and fingernails painted in Easter egg pastels. “Lily just can’t get enough of these books,” I continued, staring at the cashier, but feeling a hot blush rise up my face.

I don’t have a cousin Lily.

The invention of my pseudo-cousin was all about tricking the cashier, who I’d never see again, into thinking I wasn’t buying the pile of young adult books for myself.

Which is ironic, since I was actually a young adult.

The books were continuations of the Sweet Valley High series I’d devoured in middle school, depicting the lives of two California-blonde twin sisters, the careless Jessica and bookish Elizabeth, and their sun-kissed adventures. Post high-school, however, the twins kept managing to get themselves into serious danger and intrigue, like being stalked by a mental patient, dodging bullets in the cafeteria, and getting mixed up with one of the FBI’s most wanted criminals.

In the months after my brother died, unable to read anything longer than a brief magazine article, I’d returned to the series. There was something comforting and mindless in the characters I’d known so well when I was a tween. The books were an easy escape at a time when I desperately needed an escape. Any decent mental health professional would say I was trying to return to a simpler, more innocent time in my life through my “literary” choices.

A few decades have slipped by since my book-buying shenanigans. I’m old enough to purchase young adult books without inventing a fake younger cousin to buy them for, because I’m clearly old enough to be buying them for my own, quite real children.

And I’m not embarrassed anymore, anyway.

Just like when I was in my 20s, I find it soothing to get lost in a story about the inner lives of teens or young adults—despite the fact that those were rocky periods when I was going through them. My life now is steeped firmly in adulthood, in the chop wood, carry water of paying bills and feeding my kids, of worrying about the environment and government. Revisiting an earlier stage of life, through reading, feels like pulling up a warm blanket, leaving me warm and cocooned.

Reading YA literature also brings back the magic, the intensity, the firstness of everything. The feeling of anticipation, of simmering crushes, of trying to figure out just who we are and how we fit into the world around us. Of a time when our choices remained mostly ahead of us, our adult lives blurrily dangling somewhere in the future, waiting to be shaped.

And, um, the romance. It hurts a little to remember what it felt like to have my skin afire with attraction, my mind alit with obsession. To touch the person you like and feel the rest of the world recede, until there is just skin and spark and wow.

Reading good YA is a bit like time travelling, like being reintroduced to a younger, more chaotic, potent, hormonal version of ourselves.

Unlike my younger self, when I read YA, I do aim to read well-written books. The ones that tackle eternal themes like loss, identity, and love.

Here are 10 of my recent favorites if you decide to dip your toes into the shimmering world of young adult literature—or just buy a few for your cousin Lily. I heard her birthday was coming up.

A poignant story about a high-schooler dealing with a traumatic secret. I enjoyed the taut, well-written prose.

>> The Impossible Knife of Memory by Laurie Halse Anderson

This novel explores issues like PTSD, family relationships, and addiction. A compelling and vivid page-turner.

>> Looking for Alaska by John Green

A boarding school student obsessed with famous last words falls for a one-of-a-kind girl named Alaska. This was the first John Green book I read—and before I’d even finished it, I was lining up my next Green book.

What happens when two people with the same name find their lives intersecting? This novel manages to be both dark and delightful.

Based on real goings-on, this follows two teenage boys attempting to set a Guinness World Record for the longest kiss. I was haunted by the narration—a chorus of men who died of AIDS in the 80s.

>> We Were Liars by E. Lockhart

What really happened that summer on the island? This story, told by an unreliable narrator, was one I couldn’t stop reading until I found out.

>> I’ll Give You the Sun by Jandy Nelson

Jude and her twin brother, Noah, were inseparable—until something happened. I fell hard for this dramatic, poetic, and expertly crafted novel.

>> The Sky is Everywhere by Jandy Nelson

When her older sister dies, Lennie is devastated. But she’s also, to her shock, caught between two boys. I like the way this book offers a realistic, honest portrayal of grief.

A fresh yet classic story of opposites attracting, and the bumpy course of teenage attraction. This novel oozes charm and took me back to my teenage years—both the good and the challenging parts.

>> The Sun is Also a Star by Nicola Yoon

Another story of star-crossed love. Yoon is a master of structure, poetry and surprise—the way she tells this story is phenomenal.