A Hitchhiker’s Guide to Making your Life Better.

I am traveling the world for 14 months, and while having a tight budget is a necessity for me, it’s also a chance to get in touch with the world and its people.

For that reason, I dedicated myself to a mission I call “Hitchhiking from Austria to America.” The less money I spent, the more I depended on strangers and learned about myself. That made me curious to see how far I could go.

My travel companion, Martin, and I agreed on taking the challenge up a notch: to make it from Lisbon to the south of Portugal in three days without spending a single cent. That opened the door to a world that was not accessible from my comfort zone.

The sun was just about to set and the moist autumn air reflected the last sunbeams of the day into a picturesque orange sky. I was dancing on the highway on-ramp that leads hundreds of drivers out of Lisbon and home from work. My fingers clasped a cardboard sign that said “South;” my goal was to attract the attention of the few who were willing to take two strangers into their cars.

As the orange slowly gave way to a dark blue, the night air became perceptibly cooler. People who passed in their cars looked at us, both amused and skeptical. And all I hoped was that one of them would soon have mercy on us and give us a ride. Shortly before dusk had turned into night, we got picked up by Henrique, an agricultural student from Palmela. This is a small and charming town 30 km away from Lisbon; a town I didn’t even know existed one hour before.

Henrique let us out in the centre, and as we walked through the narrow and steep streets, we saw a guy leaning casually outside a bar. Martin and I glanced at each other, rather clueless how to ask a stranger for a place to sleep. “So we have this crazy project,“ was our spontaneous way to open the conversation. “Well, that’s a good start,” the stranger, Gabriel, responded. He offered us his house right away and even gave us the keys.

The kindness of this stranger, who turned into a friend as the hours of the night dragged on, amazed me. It taught me two important lessons:

After Martin and I found shelter, we realized we were hungry.

Palmela isn’t the vibrant kind of city that has restaurants on every corner. There was one café—so we gave fate a chance. But how to do this, how to ask if we can get food for free? That might sound a bit weird to most people who run cafés, right?

Hence, our first question: “Do you need help in the kitchen?“ We were serious. Rui, the owner of the café, didn’t look like he believed us and answered, slightly skeptically, “Not at the moment.“ I explained to him what our project was and he brought us two massive chicken wings in an aluminum tray—even quicker than if we would have ordered it.

My experience was that people, in general, have a helping gene and can be surprisingly kind to strangers; it’s all a matter of trust. How we treat them and what they feel in our presence is crucial. Not all of them look like potential supporters at first sight, but they can open up quickly once they feel some good vibes.

This experiment opened up a whole new experience for me. As a journalist for Austrian television, I earn a good living, and thanks to this life, I’ve never had the need to beg for money, food, or shelter. With my moral standards, it felt ethically wrong to ask for free food or shelter when I am financially able to afford it. It became easy to feel guilty.

But I think it’s time to change this perspective. If we prepare our karma beforehand, life can become an inspiring game of giving and receiving, rather than a desperate project of trial and error.

I started at home by signing up on couchsurfing and offered dozens of travelers a place to sleep. Donating money or inviting strangers for drinks also works pretty well. What goes around comes around and it feels incredibly rewarding when it’s our turn to receive.

Martin and I woke up late on day two in Palmela. Instead of hitting the road, we worked on our computers and overlooked the time. It was late afternoon when we packed our backpacks and ourselves in five layers of warm, winter wardrobe.

Hitchhiking at night is advanced stuff—we usually avoided it. This time, it seemed we couldn’t, so we prepared ourselves mentally for the worst case scenario: being stuck out there on the cold roadside. Henrique, who gave us a ride on the first day, offered his help a second time. He invited us to his home. His father cooked traditional Portuguese dinner and served delicious red wine. The evening ended with a glass of whisky and deep conversation in front of the fireplace.

When we said goodbye the next day, Henrique said something that touched my heart: “It’s nothing special I did. But you guys treated me so well that I wanted to return the favor. So I am caring about you.“ He even thanked us as we left.

I thought a lot about Henrique’s words over the next few days. We were the ones who were supposed to be grateful. Why was he thanking us?

Then, I realized something essential: We had returned the favor by being interested in Henrique’s life and that of his family. We tried to understand them, to be open to new cultures and concepts of living, and that obviously left a sustainable impression.

Maybe I was able to contribute that one inspiring thought to a topic, to donate that one concrete idea to their minds, and that has made all the difference. We never know where these ideas might lead. This can be so much more powerful and valuable than money—and can be experienced in its purest way when traveling without.
~ 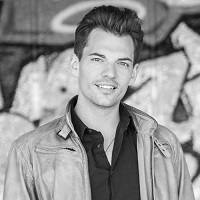