Facebook Stalkers (You know who You are) Listen Closely. I can clearly remember the early days of Facebook.

I was always referring to myself in the third person.

I put anything from hungry to working hard to spending time with family, any bullsh*t really. Whatever popped itself into my conscious was a Facebook status update. #NoFilter.

I often get a memory of it and can feel my insides contracting in cringe. F*ck it. It was just Facebook. As the Facebook world started to take over the real one, I found myself scrolling for hours and hours. I couldn’t get enough.

Wesley just went to Thailand. Like! Tracey received a bunch of flowers from her new marine boyfriend. Like! Tanya was once again complaining about her backache or making an arbitrary statement about it being a sunny day. Oh, no dislike button.

I started connecting with people from high school and connecting with people I randomly met on a night out or at work. The race for over 1,000 friends was on. I was Facebook obsessed, often referring to myself as a “Facebook whore,” with comedic pride. There wasn’t a moment that hadn’t been uploaded or checked in and there wasn’t a person I hadn’t Facebook sleuthed. If I had just met you, you can bet I knew all about your family holiday to Italy in 2008.

When you’re single and on Facebook, it can take a dark turn down sh*t street. Every single person you’ve dated, liked, or had been rejected by was fair game. Byron got married and had 2.5 kids and now works in advertising. Nick got engaged to one blonde, and it was learned upon further Facebook sleuthing that months later he was engaged to another blonde—and this time he seemed to get it right. Brad had yet another girlfriend, changing them as much as I did my Facebook status.

Facebook sleuthing has a fair amount of shame attached to it. No one wants to actively admit that they have spent their day snooping on another person’s profile, especially an ex. At one point in my life, I found myself with other singletons that were doing the same thing I was, but it was like “Fight Club”—and we all knew what the first rule was.

While we joked about being investigative detectives, we were also promoting how incredibly wonderful our lives were. We were happy…in the realms of Facebook. Facebook is a fantasy land of true love, extraordinary social lives that includes travelling all over the world, and when our boss told us to take on one extra project, we suddenly ran the company on Facebook.

Success abounded. I was a big part of it, a participant in the great success lie. Behind the scenes, I was judging my life by all of what I was seeing. Measuring and defining my success by a social media tool. It wasn’t the only tool around.

As the years progressed, I started noticing that the people I had connected with on Facebook and actually saw face-to-face were also perpetuating this lie. John and Kate had the perfect lives, both successful career people, madly in love and having travelled extensively, yet they were miserable in their day to day life and couldn’t have children.

They were the couple at the party that would most likely end up arguing or bickering about something, making it uncomfortable for the rest of us as we desperately tried to defuse the situation with small talk. John and Kate aren’t their real names and we are still Facebook friends. Who am I to burst their Facebook bubble?

This endless cycle did nothing for my spirit. The more friends I added, the more status updates I posted, the more times I checked in, the emptier I felt in my own life. I would then make it worse by Facebook stalking everyone, all the time. What wonderful lives they lead. What a shit life I lead.

The selfie was something I abhorred from the moment I saw it. There she was, lips pouted and parted, staring to the side in some attempt to look meaningfully deep. Makeup expertly applied and usually with some hashtag about being happy or my personal favourite, a #queen.

In a society that constantly tells you what you should look like and who you are, this new selfie craze was exactly what we didn’t need. What did I do? Naturally, I started trying to perfect the selfie. I like to think of it as the dreaded “sheep mentality.” It felt good, the fleeting, surface-level good. Upload selfie, wait 10 minutes, and you have 35 likes. You’ve won (especially if it’s liked or commented on by the guy you’ve been eyeing).

Best you don’t put any stock in those points though.

When I look at the opportunities Facebook gives me in terms of information and the sharing of that information, I find it invaluably useful and something that can be inspiring. I curated my news feed, I culled my friend list, and instead of feeding my low self-esteem with images and stories that I personally deemed as superficial, I fed my mind with what inspired me, what motivated me, what encouraged me to truly be who I am.

The amount of time I spent on Facebook diminished, and I found myself being present in more moments of my life. I wasn’t just taking photos so that I could immediately update, or staring at my phone to check in, I was engaging with the people I was with and engaging in what was happening in the now. The present moment was no longer lost and my self-esteem was no longer taking a social media beating.

Creeping on other people is often guided by our own fear. This might help: 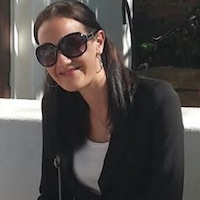