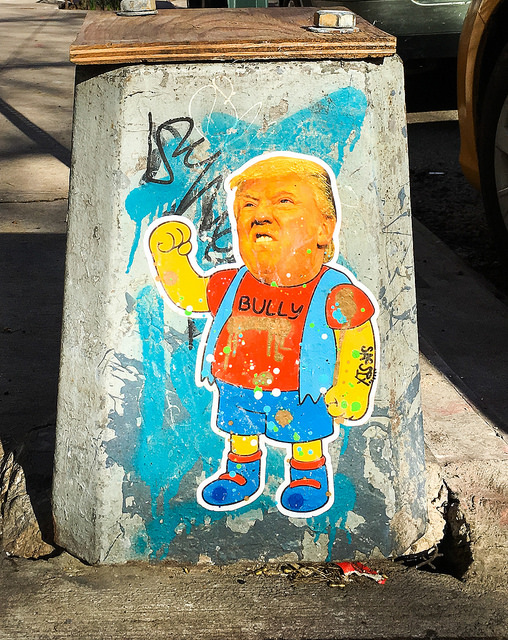 Every morning, I have to take a deep breath before I scroll through my social media feed.

I pray for peace, for patience, and for one single day when the United States president doesn’t shame us before God and country with his infantile behavior (my apologies to infants everywhere for the comparison).

I’ve decided that I may need to postpone my morning scroll until I’ve had a yoga practice, a meditation session, and a healthy breakfast to give me added strength.

Why do I scroll at all? I mostly stay in touch on social media for the social networking opportunities with friends and family. I want to keep abreast of what’s happening in their lives. But I am also a concerned citizen, a voter, and a human being who has to share this planet with others. So, I try to stay informed and to educate myself about current events.

The president has launched a cyber-bullying attack against the “MSNBC Morning Joe” co-hosts. His attack included a reference to morning show host Mika Brzezinski’s appearance because apparently the president still thinks this is a schoolyard and that childish taunts and bullying behavior is acceptable.

He referenced an incident where she was “bleeding from her face” following a cosmetic procedure.

…to Mar-a-Lago 3 nights in a row around New Year’s Eve, and insisted on joining me. She was bleeding badly from a face-lift. I said no!

I believe he made the cruel statement because the show has been critical of his actions as president.

President Trump’s actions were further defended by First Lady Melania Trump, who is supposed to be working on an initiative to end cyber bullying. It’s clear that neither understand that the president himself could be the poster child for cyber bullying with his frequent, personal attacks at everyone from Meryl Streep to the “Saturday Night Live” cast.

.@StephGrisham45: “As the First Lady has stated publicly in the past, when her husband gets attacked, he will punch back 10 times harder.”

This type of behavior from the president of the United States is dangerous.

Whether he wants to be a role model or not, his status makes him one, and Trump has a responsibility to set a good example for young people—a responsibility that he clearly doesn’t understand. When he acts publicly in a way that goes against everything we’ve learned, it gets difficult to tell young people not to do what even the president is doing. Particularly if we voted for him (I didn’t).

It’s surprising when you think about it, but most of the rules we learn in preschool and elementary school are still applicable as adults. Our outline for good human behavior is taught to us at a young age, but I’ve adapted the rules for adults to help educate those who are still coloring outside the lines, so to speak, with their behavior.

The president himself would do well to review these rules again so that he can understand why it’s inappropriate to use unkind words to respond to one’s critics.

This is so important. We have to learn to stop trying to get our own point across and instead listen to what others have to say. And if what others say about us is primarily negative, we need to pay attention to those messages. Instead of criticizing them for providing honest feedback, we need to closely evaluate our own actions (ahem, Mr. President). If our actions aren’t appropriate in some way, we have the opportunity to change.

Listening is also important when it comes to understanding those who are different from us. Perhaps we wouldn’t want to ban their travel (cough, cough) if we actually listened to them and related to them as individuals. But it’s hard to learn anything when we don’t listen.

It’s even more important to listen to one’s critics than one’s admirers. Sure, it’s nice to sit around and listen to one person after another praise our actions, but the truth is that our critics are sometimes more likely to point out when we’re doing something wrong. Instead of getting defensive, we need to consider what we can learn from what we’re hearing.

If we don’t understand something, we have the responsibility to ask questions to learn. We don’t just tell everyone we’re the best at everything and know better than anyone else. The presidency isn’t a “fake it til you make it” sort of job. Most jobs aren’t. It’s okay to make mistakes, but it’s not okay to pretend to know what we’re doing when we don’t and then blame others when we mess up.

Do our best work.

We should always do our best work, no matter the job. This isn’t about perfection. This is about putting in our best efforts. It’s hard to believe anyone is putting in their best efforts when they don’t show up for work on time, skip out on important meetings (like security and intelligence briefings), and spend work hours on the golf course and at fancy resorts, rather than in the office. A part of doing our best work means acknowledging the contribution of others and never taking credit for someone else’s work. Taking credit for the work of others is dishonest. It’s also cheating, and it’s not acceptable behavior.

Keep our hands to ourselves.

This is a big one. We do not grab people by their genitalia or any other body parts without their direct consent. We do not kiss people just because we feel like it. We do not punch people in the face or threaten to do so or encourage others to participate in that kind of behavior. No, no, no.

It’s important that we’re honest with ourselves and others. This means we don’t make promises we can’t (or won’t) keep. It means that we don’t set out to purposefully deceive. When asked a question, we answer honestly. No one likes a liar, and it’s hard to reestablish a reputation for integrity when we’ve been caught in lies. We also don’t try to persuade others not to believe the truth (fake news). Just because we don’t like something doesn’t mean it’s not true.

Treat others the way we want to be treated. (Be respectful and polite.)

This means that we don’t bully. We don’t call names. We don’t treat others with disrespect, including harassing a female reporter because she’s considered attractive when she’s actually just trying to do her job. Being respectful also means that we don’t make racist, sexist, homophobic, transphobic, or misogynistic comments. We don’t discriminate against certain religions, and we certainly don’t make false statements in order to damage someone’s reputation.

A big part of this rule is that we’re to be kind. If we don’t have anything nice to say, we know that it’s better to say nothing at all. We don’t have to like everyone in order to behave politely and get along.

Today’s news left me frustrated and mildly irritable because there will be people (like the First Lady) who will justify his actions.

There is no justification for bad behavior.

It wasn’t acceptable when we were five years old, and it hasn’t grown to be more acceptable now. It’s important that we don’t normalize this behavior. It doesn’t matter how we politically identify; our president should represent us all and should at least try to be a good role model to young people.