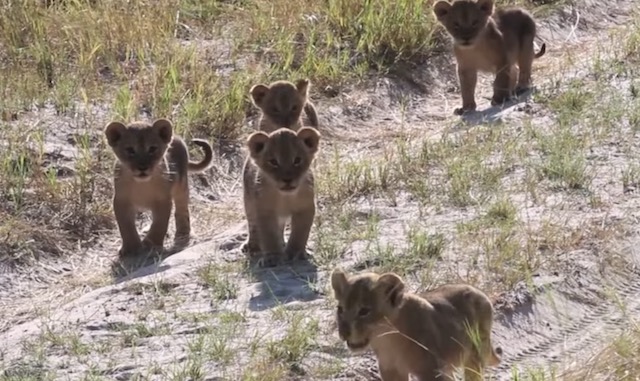 It was just over two years ago, on July 1st, 2015, that Walter Palmer killed 13-year-old Cecil the lion, and sadly it emerged today that Cecil’s oldest son, Xanda, has also been killed by a big game trophy hunter in Zimbabwe.

Despite international outcry following the death of Cecil, who was believed to be Africa’s biggest lion, these majestic creatures are still legally hunted down and shot by people willing to pay tens of thousands of dollars for their sporting pleasure.

Xanda, who had recently fathered cubs, and was being tracked by Oxford University, was just six-years-old and in his prime. He was killed just outside the Hwange National Park near where his father was shot with a bow and arrow.

Sadly, despite the widespread protests and calls for restrictions on trophy hunting following Cecil’s death, the lions—and many other wildlife species—are still vulnerable against trophy hunter’s deadly weapons.

According to the Zimbabwe Conservation Task Force, Cecil was shot with a crossbow after being lured out of the sanctuary by the scent of food, but he was not instantly killed. Therefore, the hunters tracked him for about two days before shooting him with a gun, beheading and skinning him, then leaving his corpse to rot.

It is believed two Zimbabwean men assisted Walter Palmer—one was a farm owner and the other a professional hunter.

Xanda’s killer, who has not yet been named, was on an excursion with Richard Cooke Safaris, a well-known hunting company in Zimbabwe.

Cecil’s death was said to cause the biggest ever global reaction to a wildlife story, which resulted in Australia, Romania, and France banning the import of hunting trophies. Botswana, which borders South Africa and Zimbabwe, also implemented a complete ban, to make it clear that hunting animals for trophies was no longer welcomed in their country.

The United States added a new provision that stated they would only allow the import of trophies from countries that use the hunting fees to support lion conservation.

The Humane Society undertook a study to determine the impact that American hunters have on wildlife in other countries and found that between 2005 and 2014 more than 1.26 million hunting trophies were imported to the U.S., from hunting more than 1,200 different animals. This includes 5,600 African lions, 4,600 African elephants, 4,500 African leopards, 330 southern white rhinoceros, and 17,200 African buffalo.

Despite the African lion being listed as vulnerable on the International Union for the Conservation of Nature Red List of Threatened Species (IUCN Red List) and “endangered and threatened” under the U.S. Endangered Species Act (ESA), it is tragically still a popular target for hunters, and they are willing to pay between $13,500-$49,000 for a trophy, or even more in some cases.

The study mentioned above examined what motivates hunters and discovered that hunters believe that killing an animal demonstrates virility, prowess, and dominance. Another motivation is known to be hunting competitions; one particular competition involves hunters receiving an award for killing one of the “big five,” which includes an African lion, an African elephant, an African leopard, an African rhino, and an African buffalo.

These competitions are sponsored by trophy hunting organisations. The largest one is the U.S. based Safari Club International (SCI) which is reported to have 50,000 members.

A hunting trophy is a body part from the animal that the hunter killed that is prepared so they can take it away as a souvenir, where it is often displayed in a home, office, or game room.

Many animals are hunted from behind fences, which is known as “canned hunting.” The animals have no chance to escape, so the hunter has a guaranteed kill. Many animals are specifically bred for this purpose.

To get involved and support the organisations trying to protect our world’s precious animals, click on the links below to discover more about the relentless work currently being carried out to keep precious animals safe.

It is heart-wrenching for animal lovers to see pictures of stunning creatures shot down and killed just to feed a hunter’s adrenalin-rush or competitive zeal. The most shocking for many is that the hunter stands there proudly next to an innocent, defenseless animal that they have unfairly and cowardly defeated by using weapons that an animal cannot compete against.

Hunters rarely put themselves at risk as they go out in organised excursions with experienced killers that will protect them if an animal gets too close. Yet, for reasons that many struggle to understand, hunters feel courageous and take great pride in their ability to aim their weapon of choice at an animal and prematurely end its life.

This may be a practice that is legal, but it does not make it okay to murder animals that we should be preserving. All animals feel fear and pain, and although the death of the hunted animal may be instant, they often leave behind babies, or lifetime mates, who will then inevitably suffer.

“’Sport hunting is a sickness, a perversion and a danger and should be recognised as such. People who get their ‘amusement’ from hunting and killing defenseless animals can only be suffering from a mental disorder. We know that we should protect the most vulnerable and helpless in society, not destroy them—much less derive pleasure from doing so. Thankfully, those of us with a conscience are appalled by the idea of gunning down animals for the sake of a thrill or a photo. Interest in hunting in Great Britain and elsewhere is steadily declining since decent people prefer to hike, take photographs, kayak, and generally enjoy the outdoors without killing other beings.”

WildCRU, Wildlife Conservational Research Unit, is part of Oxford University and is a world leader in its field. The project studies ecology, behavior, genetics and physiology to develop workable conservation solutions. The funding they receive helps to support its core staff and their emergency project fund.

Lion Aid works to educate the public about the decline of lions and what is causing the reduction. It is also working to convince the government in the United Kingdom and the European Union Commission to ban the importation of lion trophies and all lion products. They highlight the horrors of canned lion hunting and its associated cub petting trade and focus on raising more awareness for the cub smuggling trade which feeds the canned hunting industry. A full list of all the work Lion Aid does can be found on the website.

Along with monetary donations, Lion Aid also accepts donations of artwork or goods that can be put into auction or office equipment that will help them carry out activities more efficiently.

The Big Cats Initiative project puts patrols on the ground to prevent lion snaring, tests the carcasses of lions for signs that they have been poisoned, has anti-poaching patrols, and provides medical treatment for snared lions amongst other work.

African Parks is a non-profit organization that works in partnership with local governments and local communities and they are responsible for the rehabilitation and management of national parks.

The park accepts donations so that they can continue managing the eight parks, located in seven African countries.

If it is not possible to donate, then sharing information is a valuable option. The more awareness that is raised and the more people are educated about the suffering and plights of lions and other species, the better chance we have to make positive changes to our existing laws, systems, and traditions.