What Men Really Think of Vaginas. 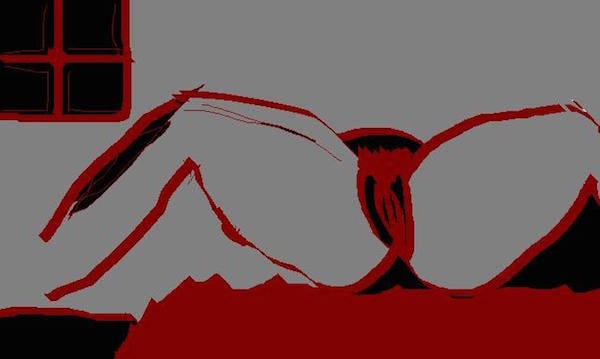 Last night at dinner my girlfriend used the term “ingrown hair” and “vagina” in the same sentence.

Suddenly, the very rare (but crispy on the outside) beef patty and green salad on my plate didn’t look good. A small wave of nauseousness swept from my little toes to my head, finally stalling in my mind.

Please, don’t get me wrong. I know that it is politically correct for me to imagine that vaginas are beautiful things that I can’t get enough of. But at that moment (and not for the first time), I considered printing up a T-shirt that says “Please don’t show me your vagina.”

Somehow, wearing that T-shirt at the beach, the opera, or even back in my frisky high school years makes me feel safe and aligns with a deep, seldom-visited aspect of myself that really doesn’t find a vagina any more attractive than the open sore that it appears to be.

I, like most men, have spent much of my adult life worshiping at the shrine of vagina. I’ve hoodwinked myself into imagining that a woman’s genitals are some prize in the quiz show of life, and that I want to sneak a peek whenever possible. It’s hard to admit that I don’t really like the way they look, and that they appear to be unfinished.

So often, I find you hotter clothed, rather than naked.

I’m not saying that a penis is better looking—they are pretty weird looking things as well, and time spent at nude beaches hasn’t made me tempted to flaunt mine. I’m no prouder of my penis than I am of my big toe, or the little finger on my left hand, or either of my earlobes.

I think that when it comes to genitals, I have pretended to be much bolder than I really am. I don’t want bright lights on when I begin an expedition down south of your waist and north of your knees. I don’t hesitate to go there, because it feels good to both of us—but I do take off my reading glasses first, preferring braille.

Back in more wantonly randy years, I used to imagine that the more vaginas I saw…the better. But now, I want much more from you. I want laughter, both at the dinner table and in bed. I want the feel of the soft skin of your legs, forearms, and the nape of your neck. I want to like being with you—that gets me over the hump of how seeing your vagina affects me.

I’m not insensitive; I do know that this probably sounds wrong, immature, or off point—but, comparisons of vaginas to irises leaves me feeling flat. It has me overcoming what appears to be a natural aversion to a place I would rather visit with my eyes closed.

This could just be me, I know—but I don’t think it is. Caves of all kinds have bothered me for decades, ever since I got stuck in a limestone one when I was in my 20s. More recently, in New Zealand, I stumbled upon a 2.5 kilometer cave with no natural light at all. Fumbling around in there reminded me that spelunking isn’t my thing.

But I don’t think that “caving” is the root of my disinterest in looking closely at vaginas. Although I love sex—and I know vaginas (and even penises) aren’t necessary for the act—I really don’t view them as much more than accomplices on the way to pleasure. And I feel some freedom in finally admitting that.

Sure, some immature part of me still gets a thrill at seeing a new vagina, like forbidden fruit. But that part of me is too young at heart to enjoy the mature attraction over time that I want with you. That part of me is more likely to look, have its way with your flesh, and then wander off.

My son has an aversion to honey bees. Recently, he has been sitting by hives of them attempting to relieve himself of his nearly phobic response. He says it’s working.

I say that I’ve tried the same thing with vaginas, and every attempt I have made to stare them down—or shoot pictures of them, so I can look at them and try to consider them “artsy”—hasn’t worked.

I’ve heard guys pine about the beauty of vaginas—but there is a lilt in their voice, an insincerity in their tone. Even the most oblivious men will have to admit that it isn’t the anatomy of it that turns them on—it’s the forbiddenness. And every man I know has had experiences of attempting to please a vagina and blatantly failing, offering averse scary anchors.

If we really liked vaginas as much as we pretend we do, we would pay women more money than we do men, just to have vaginas around. We wouldn’t be so quick to get our penis out of our pants and into a vagina. We would tend to linger, which we don’t, and wile away hours on a lovely spring afternoon, summer evening, or curled up by the fireplace on a cold winter’s eve looking at your vagina.

Vaginas make us squeamish. They make us weak in the knees. They make us want to possess them without really ever examining them fully. We don’t want to hang out with them—we prefer your fair personality over your hot, wet flesh as much as we have been trained to pretend otherwise.

So please, don’t make falling in love with the appearance of your vagina a condition for hanging out with me. Trust me when I turn out the light or my attention is drawn to your eyes or our conversation—and away from the visuals associated with down there. Forgive me for not wanting to play doctor as badly as I once did, but for still wanting to have sex, possess you, and share incredible pleasure with you.

Please forgive me if I fixate on your hip bones, elbows, or that soft, virgin skin behind your knees, desiring every centimeter of your body equally.

Don’t make the cost of admission the pretense of adoration of that confusing place where the sun seldom shines. Don’t show me yours, and I won’t show you mine, but won’t you still be my valentine?