Cats are Empaths: The Power of the Purr. 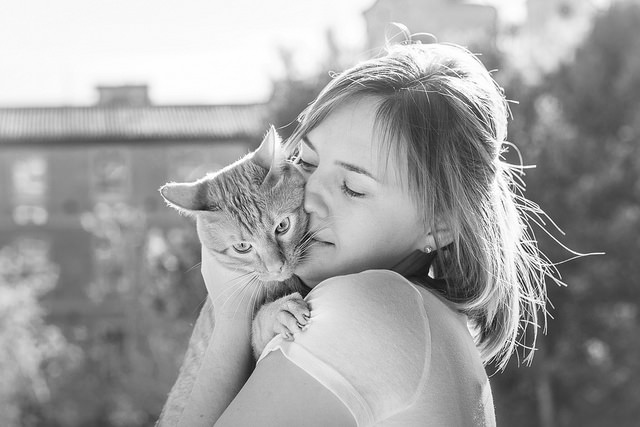 “If you put a cat and a bunch of broken bones in the same room, the bones will heal.” ~ Old veterinary saying

Vibration and sound frequency have been used as healing modules for thousands of years, and they are now supported by a variety of scientific research.

The body produces natural anti-inflammatory compounds when it is subjected to high frequency sound and vibration, and this is known to reduce joint pain and swelling, as well as supporting the repair and restoration of muscles, tendons, and ligaments.

All purring cats produce a high-frequency harmonic purr on both inhalation and exhalation, with a consistent pattern and frequency falling somewhere between 20-140 hertz. The purring is produced through intermittent signaling of the laryngeal and diaphragmatic muscles.

Most domesticated cats purr between 20-50 hertz, which is around 20-50 vibrations per second. This is also the frequency best known to enhance bone density and relieve pain, and that promotes muscle and tendon healing.

Many who have cats in their homes may unknowingly be receiving relaxing pet therapy, as they have tapped into a natural source of healing from the vibration of their cat’s purr. This could benefit them with higher self-esteem, lower blood pressure, greater levels of emotional, mental, and physical health and well-being, and a reduced sense of isolation and loneliness. It has even been shown that just thinking about one’s pet can alleviate negative feelings.

The vibrations that emanate from purring have also been linked to lower stress, reduced chance of heart attack, and stronger bones.

We could  conclude that the well-known term “crazy cat lady/man,” commonly used to describe those who have numerous cats, must be a myth, as cat lovers are likely to have enhanced emotional and psychologically well-being—so they may be the most mentally healthy of all!

Not only that, research also that suggests that those who have pets are likely to live longer than those without. It now makes more sense why cats are perceived to have enchanting, magical, and mysterious powers and prowess.

Those who have close bonds with cats often say that their cat seems to instinctively know when they aren’t feeling well, and that it even appears to sense where the pain is coming from. Cats are known to attempt to gently massage injured or inflamed areas with their paws, or they sympathetically position themselves next to the aching spots while purring extra loudly. This is one of the reasons why many cat-lovers feel magnetically drawn to snuggle in close to their feline friend when they are sick, in pain, or at the end of a particularly stressful day.

Elizabeth von Muggenthaler, a specialist in the field of bioacoustics at the Fauna Communications Research Institute in North Carolina (FCRI), studied the frequency, pitch, volume and duration of animal sounds and discovered that purring is nature’s way of gifting felines with evolutionary healing.

Often, people believe that a cat only purrs when it is happy, but von Muggenthaler’s research has found this to be untrue. Cats purr from both pleasure and pain, and when they purr from pain, it is to support self-healing from sickness or injury. Cats are also known to purr when they are in potentially threatening situations, and it is believed this is to regulate their internal fight or flight responses and to keep them calm, alert, and in control when in danger. Purring may also be a method of signaling to other animals that the cat is not posing a threat to them.

Cats are masterful at conserving energy, and although their purring sounds can seem loud and feel intensive, it uses up very little energy. This means that they can self-heal when their bodies need it most, without using up vital energy resources.

Incidentally, the vibration from the cat’s purr is less intensive at their extremities, for example their paws—and while it is rare for a cat to get cancer, if they do, the extremities are the most likely place they will get it. It is also rare for cats to suffer with bone or joint-related diseases, which include hip dysplasia, arthritis, and ligament problems, which is thought to be due to the high level of vibrations in these areas.

When a cat purrs, it is strengthening its bones, as well as keeping its muscles toned and supple. This is thought to be one of the reasons that cats are known to have “nine lives,” and why they can survive falls from great heights, as they have inherent survival skills with incredible internal regenerative powers—as the purr is also believed to release a hormone that acts as a relaxant and pain-reliever. It is also thought that this natural painkiller is released when cats are in labor, which is why they purr extra loudly while giving birth.

Purring is also a nurturing bonding mechanism, which is why cats purr to their kittens to offer reassurance, comfort, and protection, as well as a sign of contentment, and the kittens purr back to vocalize they need milk. Purring is also a way that the mother kitten communicates her location to newborn blind and deaf kittens.

Many of those who have furry companions say that they recognize the different intensities, volume, and urgency of their cat’s purr. For example, they can tell when their cat is communicating that they are hungry, thirsty, tired, injured, unwell, in pain, frightened, anxious, happy, or secure. Although a cat’s purr regulates on the same frequency for the entirety of its life, it can purr quietly or loudly depending on their circumstances and needs.

Cats offer unconditional love, and many are highly affectionate; therefore, stroking, cuddling, or playing with a cat is believed to promote healing, alleviate pain, improve moods, relieve stress, and offer similar calming benefits to those gained while meditating.

To receive maximum feline healing, attune to your cat’s energy, and pay attention to where the purring vibration feels the strongest, as this is the location that offers the highest levels of vibrational and sound therapy. Then relax and snuggle in to resonate closely with your cat’s vibration as it radiates divine empathetic healing and naturally and rhythmically soothes and dissipates your aches, pains, and stress.