The Mental Load Burning Women Out. 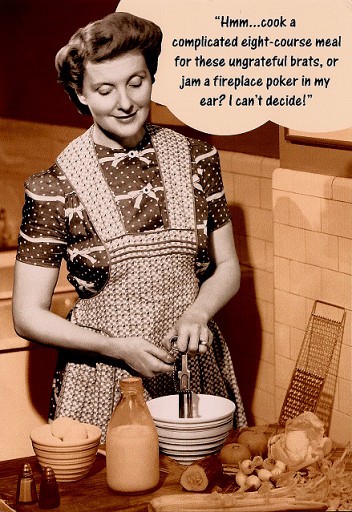 A French cartoonist’s astute recognition of a problem that continues to plague women at home.

The kids are in their high chairs, and you’re trying to coax them to eat while keeping an eye on the stove. Your partner comes home, dumps his bag on the floor, pats the baby on the head, and tells you about his day. “That’s great,” you reply. “Can you feed the cats?”

Two minutes later: “That’s great, can you put this stuff back in the fridge?”

“That’s great, can you give the baby something to eat?”

“Awesome, can you set the table?”

It continues during dinner. “Sounds fascinating, can you hold that thought while I run the baby’s bath? And book her in to get vaccinated? And remember to write ‘soap’ on the shopping list because you used the last one and I’m showering with baby shampoo? And hold that thought while I throw in a load of laundry so we all have something to wear tomorrow, book the incontinent cat in at the vet, and—holy crap—I just tripped over your bag.”

Sound familiar? It’s called “The Mental Load,” and the scene above (plus a few embellishments) was brilliantly depicted in a comic that went viral by French artist “Emma.”

The mental load is the running commentary that plays in your mind of all the things that need doing that no one else but you (apparently) sees.

The mental load doesn’t respect downtime. You may be snuggling with your partner in front of the TV, but you’re actually wondering if it will rain on the laundry overnight because the kids are down to their last socks.

Think of a household like a company running several ongoing projects all in different stages (cooking, cleaning, laundry, bills, maintenance, childcare). The difference is, while men are perfectly capable of making sure it all happens outside the house, at home, the role of project manager still (mostly) falls to women by default.

“The problem is this is a whole job in itself,” Emma says in the comic. “So when we ask women to take on this task of organisation, and at the same time execute a large portion, in the end it represents 75 percent of the work.”

Like all forms of inequality, the people who profit from it tend not to see it. According to research by sociologist Dr. Leah Ruppanner, “When women start to cohabit, their housework time goes up while men’s goes down, regardless of their employment status.”

(Interestingly, Ruppener’s research also found that “when men don’t do an equal share of housework, those men end up divorced.”)

How did “women can do anything” become “let’s stick them with everything?” Yes, men do vastly more housework than they did 50 years ago (up from “nothing,” but I digress), but they’ve held on to the luxury of switching their brains off at home. Women get home from work and know they have another four or five hour shift ahead of them. And the women who work part-time end up picking up so much slack at home, they end up working twice as hard, for less money.

How did it get this way? Culturally, we still depict the home as the “woman’s domain.” Advertising perpetuates the myth that it’s not masculine to be anything above barely competent when it comes to manners of the home. Hapless males who can barely keep it together when left alone with their own kids and a pile of laundry reinforce the idea that it’s funny for men to shirk their share and heroic of women to swoop in and save the day. We’re meant to find it hilarious that while men can get it together to be the CEO of everything, they can’t follow the care instructions on a jumper.

Children soak up these messages and learn to tie their worth to the values they espouse. Men go out into the world and have adventures, while women are wise caregivers who always know where your soccer shoes are when you need them. How fulfilling!

“Once we become mothers this double responsibility blows up in our face,” writes Emma. “And once we’re back at work, things will get so hellish that it will feel less exhausting to keep doing everything rather than battle with our partner to do his share.”

I know: “Just don’t do it,” right? The trouble is if no one does it, things fall apart and you end up having to step in after the bill hasn’t been paid, the kids have had cold pizza for lunch every day, the car didn’t get registered, and mold grew on piles of wet towels.

So what can you do?

And finally, when your partner does start taking responsibility for a new area, let them work it out on their own. Resist the urge to criticize or “rescue.” And while they’re figuring it out, grab a book, turn on Netflix, leave the house—without giving instructions. Switch off and let someone else figure it out. And repeat.