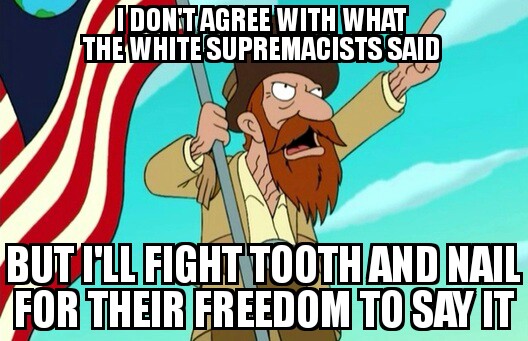 Personally speaking, I take a lot of issue with the way that the American military is run.

I take issue with the “stand behind our troops or feel free to stand in front of them,” “you’re either with us or against us” mentality that allows no room for question or discussion.

Sexual assault is a rampant problem in the military that people are, quite frankly, not doing enough to address.

Yet, whenever I have mentioned these concerns in the past, there was someone nearby who wanted to convince me to overlook these problems and regard the American military as an overwhelmingly positive force. I heard the same comment over and over: “These are men and women who are fighting for your rights. If it weren’t for them, you wouldn’t even be able to say that you disagree with them. If it weren’t for them, you wouldn’t have freedom of speech.”

I won’t deny that; the American military is filled with men and women who fight, suffer, and die so that their fellow countrymen are allowed to say things that could get them killed or imprisoned in other countries.

Growing up, I took it for granted that freedom of speech was always a good thing.

“I do not agree with what you have to say, but I’ll defend to the death your right to say it.” ~ Evelyn Beatrice Hall

Freedom of speech has been used to defend what are, in my mind, some pretty atrocious things. A homophobic baker refused to bake a wedding cake for a same-sex couple, but he claimed that he was only practicing his freedom of speech. White supremacists protested publicly against removing a statue of a Confederate soldier, but they were allowed to be there because that is their freedom of speech. In both of these cases, a message was very clearly being sent to a specific group of people: you are not respected and you do not belong here; your existence will not be tolerated. This message is awful, and I apologize to everyone who has had to endure it.

Sometimes, it’s easier to think that we should just shut these people up and be done with it.

We can’t because there is flip-side to all of this, too.

Freedom of speech is being talked about a lot right now, and it is not only being put under question when it comes to hate speech. President Trump has sort of put all freedom of speech into question.

The first time that I became aware of this was when he began his attacks against the media, referring to any news station that spoke poorly of him as “fake news.” Trump has even issued a press ban, refusing to allow certain organizations from attending press briefings at the white house.

But the issue on everyone’s tongue at the moment is the fact that Trump took to Twitter and actively supported the American people punishing NFL players who took a knee during the national anthem.

With this single act, Trump issued a very clear message: freedom of speech will not be tolerated, so long as it is something he disagrees with.

And yes, Trump has supported free speech in the past, such as when he defended Jack Phillips, the aforementioned homophobic baker, claiming that he had every right to refuse the same-sex couple who came to him for a wedding cake.

This makes it pretty clear where he chooses to draw the line when it comes to free speech.

In this particular instance, the NFL players in question are actually supporting something that I agree with. While the act of kneeling has since become synonymous with rebelling against Trump’s stance on freedom of speech, this is not where the act began. Initially, kneeling during the national anthem was started with Colin Kaepernick, who explained his reasoning by saying that he refused to “show pride in a flag for a country that oppresses black people and people of color.” This is where the issue stems from: a very real, very constant problem in American culture. This is an issue that needs to be addressed, and by kneeling, Kaepernick hoped to draw attention to it.

And yet, by kneeling, Kaepernick, and the other NFL players who later joined in, unintentionally began a conversation around free speech. Not only have they been told that the workplace is not a place for freedom of speech (unless they’re a homophobic baker, for some reason), but they have had their own president attempt to punish them for doing so.

The point is, these men have a concern that needs to be addressed.

Shutting them up won’t get rid of that concern.

Shutting them up won’t save black lives, and it most certainly will not increase their love or respect for the country that expresses little remorse for taking them away.

And that’s why freedom of speech is so important: when someone says something, even if we don’t necessarily agree with it, it still means something. Ignoring the problem won’t make it go away; addressing it will. And maybe addressing it makes us uncomfortable, but at least it makes us talk and develop and grow and change.

And, at the end of the day, who gets to decide who is worthy to speak and who isn’t?

Donald Trump is trying to assume the role of decider, but all this has done for him is create a divided country, neither side of which truly feels like their voice is being heard.

My whole life, I have always heard freedom of speech revered as this amazing force that needed to be respect. I have been told that it is a right that people have fought and died for, that it is a rare privilege to be enjoyed by everyone who has access to it. I still believe all this. If you have a problem, speak it, because there’s no other way to address it.

But just because someone says something rude and hateful and awful, that doesn’t mean that I have to tolerate it. That is me practicing my freedom of speech.

What we need to do right now is make sure we show how much we value our freedom of speech. We can’t allow ourselves to be silenced by anyone. Speak up when you have to, whatever that might look like for you. Take to the internet, join in with any protests going on near you, write to your politicians when there is something going on that you disagree with.

Be active in everything, because your voice matters.

And when someone else tries to speak up, do not try to silence them. Do not tell them that they are wrong for doing so, even if their opinions are (from our perspective) wrong.

Rather than trying to shut them up, listen to what they have to say and discuss it with them.

You don’t have to agree with them. You do not even have to come to some sort of agreement by the end of the discussion.

All you have to do is allow them to speak, because sometimes, people only need to be heard.