A Response to the Reader Comment about Raping Me. 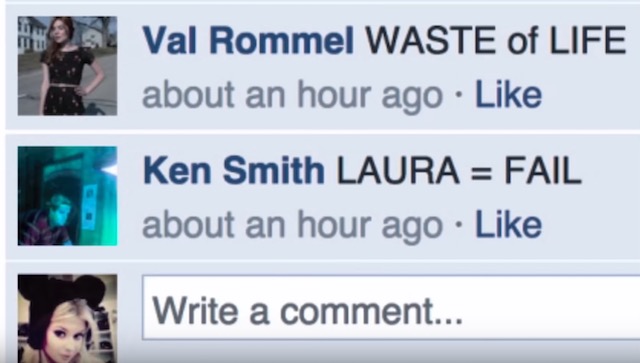 Before I started talking about feminism and feminist issues on the internet, I had heard horror stories from the women that did.

I think that we’re all aware that the internet can be a very polarizing place, and the possibility of anonymity can sometimes bring out the worst in people. People say things that they might not necessarily mean, or things that they would never actually say to someone’s face, just because they can get away with it when they’re hidden behind a username.

But that being said, there is a specific pattern when it comes to the type of threats that are given to a specific type of woman.

This morning, I awoke to find a comment left on one of my articles, where I talked about the dangers that are present in over-sexualizing a woman’s body (the comment has since been deleted, for I did not want to risk the wrong person coming upon it).

In this article, I mentioned that I developed early, and felt uncomfortable with my body because at the tender age of 12, I thought that the people around me would view me as a sexual object. The commenter started out by assuring me that the men in my family did in fact get aroused by the sight of me as a child. He then proceeded to graphically describe a rape scene, wherein I was the victim. I did not read the full comment, for the first half of it made me feel sick.

Now, I do not know this man, and more importantly, he does not know me. He does not know if I am, in fact, a rape survivor. He does not know if his graphic details will trigger me or send me into a panic attack, and he does not care. The commenter in question does not see me as a person, merely as an empty vessel on the other side of his computer screen, and yet he tells me that I deserve to be raped because I dared to proclaim myself proudly as a feminist.

And the funny thing about this comment is that, about a year ago, I had told myself that I would never speak out about feminism despite identifying privately as a feminist, because I knew the sort of threats that feminists face regularly.

When The Guardian examined comments that have been blocked by their writers, they found that eight of the ten writers who received the most blocked comments were women who had been harassed, mocked, and threatened for talking about gendered issues—including threats of rape.

Feminist author and columnist Jessica Valenti was forced to take a break from social media when she found that she couldn’t handle the constant threats of rape and death that were targeted toward her five-year-old daughter.

Feminist writers are not the only women who receive threats of rape or even murder for speaking out about feminism. In Australia, the University of Queensland came up with the idea of doing a bake sale to raise awareness for gender inequality in the workplace, particularly the wage gap, which somehow prompted an onslaught of cyber bullying directed toward those arranging the bake sale, including comments such as, “Females are f*cking scum, they should be put down as babies,” and “I want to rape these feminist c*nts with their f*cking baked goods.”

Heck, the year that I started taking classes on gender studies, the University of Toronto, which was nearby where I was studying, received online threats that some unknown assailant would walk into classes teaching gender studies with a gun and began shooting any feminist they saw. I still remember that first day of gender studies, sitting in my seat and glancing nervously at the door, hoping that the gunman wouldn’t decide to come to my school instead.

So, please, tell me again how rape is about pent-up sexuality, because I have heard it used, again and again, as a threat alongside violence and death to try to establish dominance over me and women like me when we speak up.

Before I started talking about feminism, I told myself that I would never talk about it in public, because I didn’t want to face these threats of rape and violence that feminists live with. But that is the entire intention behind these comments. These comments are not made because the women who receive them deserve them. These comments are made because the women who receive them have stood up and said something that they believe in.

They have stated that there is a problem within society that needs to be fixed, but the thing about this problem is that there is an audience that doesn’t want to fix it. Maybe they don’t see it as a problem, or they simply don’t want to admit that they’re wrong, but the fact of the matter is they get offended whenever a woman speaks up and tries to change this patriarchal society that we live in. So their response is to try to silence them, to make them feel uncomfortable and unsafe until they shut up and stop trying to fix the problem.

These threats of rape and violence on the internet are not meaningless “trolls” just having a laugh. These are men who genuinely want women to stop fighting for equal rights. These are men who hate having their view of the world challenged so much that they would rather tell a woman that he never met that she deserves to be raped or killed.

And I don’t think I even have to say that nobody deserves that.

So to the women that receive these threats: keep doing what you are doing. I know it may be scary, or triggering, or unfair, but you are a strong woman who deserves to see the day where women can speak up and not be threatened for it. And the only way we will achieve that day is by fighting for it.

To the women who will not speak up because they are afraid of these threats, I understand your fear. You are not wrong to feel it, but find comfort in the fact that these men are bullies, hiding behind their computer screen in an effort to perpetuate an outdated ideal of what women should be. They think that we should be silent and passive, when that is not what we are. And, hopefully, you will someday feel safe to speak up.

And the next time that you go to write such a comment to a woman who you have not met who is merely trying to argue her perspective and change the world for the better, stop and ask yourself if you would ever say this to a woman face-to-face with a sound conscience.