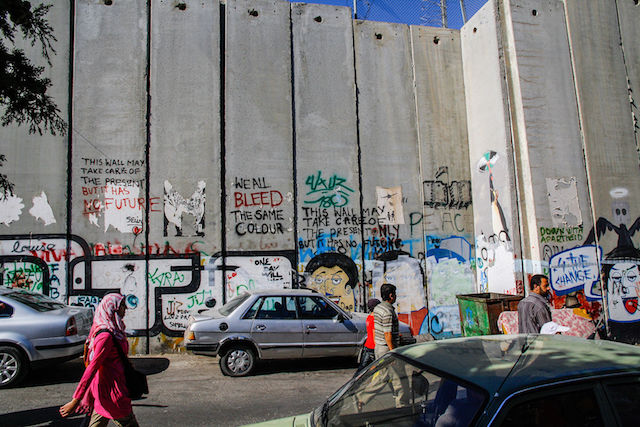 The world is now up in arms over Trump recognizing Jerusalem as the capital of Israel, because in so doing he is recognizing Israel’s claim to a largely Palestinian territory.

But Israel has been stealing Palestinian land in East Jerusalem for generations. It is a slow-motion administrative ethnic cleansing, whose primary weapons have been bulldozers, zoning laws, administrative decrees, and eminent domain.

A Palestinian resident of East Jerusalem once took me to his rooftop terrace to explain how Israel is re-conquering the Old City. Whereas Israelis can repair their homes and add structures to their roofs, Palestinians are forbidden from making such improvements, so their homes are left smaller and more dilapidated. Wealthy Jewish groups buy up ancient rooftop crescents to erase the Muslim presence from the city. And the harassment of Palestinian residents and the tensions it creates makes most tourists wary of visiting their quarter.

The effect is that visitors are left with the impression that the mostly Muslim Old City is primarily Jewish, but that is mostly just window dressing. The real problem is Israel’s effort to cleanse the city of its Palestinian inhabitants.

Israel makes life hard for the residents of East Jerusalem in order to nudge them out of the country. Palestinians reported to me that many are afraid to visit family abroad or leave for school lest they be forbidden from returning. Palestinian homes are routinely bulldozed as a punishment for their children running afoul of the state. They are often just removed outright to make way for settlers. And as Israeli settlers push their way into Palestinian East Jerusalem, they alter the demographics and culture of the city.

The wall was built about a decade ago with the express purpose of keeping Palestinian terrorists out. But a Palestinian friend told me both his brothers regularly cross into Israel illegally to find work. And the wall snakes deep into Palestinian territory, splitting farmers from their land and villagers from one another, thus making its construction a massive land grab, which the International Criminal Court ordered them to tear down.

The Palestinian West Bank has been under military occupation for half-a-century now. It was originally acquired in 1967, along with the Syrian Golan Heights, the Egyptian Sinai Peninsula, and the Gaza Strip. Israel coveted the West Bank for its centrality to Jewish identity, and Jerusalem has remained its crown jewel. Yet, the West Bank was already populated by millions of Palestinians, and Jerusalem was their center of cultural and economic life and the main artery linking their major cities.

Over the past several decades, Israel has brought close to 750,000 settlers into the West Bank and East Jerusalem. The settlements have been built strategically so as to break East Jerusalem away from the rest of the West Bank and make forging a viable Palestinian state all but impossible. Israeli settlements are built outside the state of Israel in its occupied territories, thus making the term “settlement” a euphemism for what are actually colonies. Israeli colonists are well-armed and often shoot to kill, and their presence requires constant military protection.

Israeli soldiers are centered at checkpoints on the main roads, slowing movement, and impeding economic activity. The checkpoints allow them to collectively punish whole villages when some of their members protest, and they create a pretext for blackmailing residents to spy on their neighbors. They are the nerve centers to a vast security apparatus and a demeaning source of constant tension.

Israeli settlements sit high in the hills above most Palestinian villages. Each of them is surrounded by a large ring of cleared land and they are built like fortresses, with their windows facing outward to keep watch over the locals. Israel has destroyed over a million Palestinian olive trees, many of which are ancient, in the effort to punish Palestinians and protect settlers. And clearing their land has often required them to terrorize local residents.

A man in Hebron explained to me how settlers beat his pregnant wife, leading her to miscarry—and then did the same thing when she got pregnant again. Another farmer whose land sat between several settlements that were trying to link themselves together showed me the caves where he and his family were forced to live, because the government had decreed he could build no structures on his land.

About a third of settlements are built on land stolen from private Palestinian deed holders, according to a study commissioned by the conservative government of Ariel Sharon in 2003. First the state of Israel occupied the land, ruling by a series of military decrees; then the settlers stole the choicest pieces for themselves, so the state was pulled deeper into the West Bank in an effort to protect its citizens. Now, they are the victims of their own success.

Most people working to end the occupation no longer believe a two-state solution is possible. Activists traveling to the West Bank almost universally report that the built infrastructure and state support for settlers is too great to ever allow for their removal. Many political leaders, like former Secretary of State John Kerry, who worked for years to bring the two sides together, have concluded that continued settlement building makes the prospect of a two-state solution dim.

If West Bank Palestinians are to be governed by Israel, then Israel will need to face up to the fact that it is now an apartheid state, with two sets of citizens enjoying radically different rights and freedoms and governed by two sets of laws. And the last time the world confronted an apartheid state, it was boycotted and sanctioned until it accepted racial equality.

The end of apartheid in South Africa was one of the great achievements of the late-twentieth century, which is justly celebrated the world over. Perhaps now the world will divest from Israel as well. If it does, Israel has only itself—and Trump—to blame.