The Mantra that Never Fails to Bring me Back to Myself.

If you popped into any of my children’s programs, you would hear me say, “Worry about yourself”—a lot.

If I died today, an entire community of children would expect it to be written on my gravestone. I thought I practiced what I preached…until recently.

My husband and I were in a car accident. This was the first time in my life that I sustained an extraordinary amount of physical trauma, and was deeply surprised by the amount of mental and emotional anguish it created. My daily rituals were replaced with physical therapy routines, trying to stay awake for more than four hours at a time, and getting creative with meals from the freezer and pantry without actually cooking.

It took months to get back to any semblance of my “old” routine.

Months later, I found myself taking my first post-accident yoga class. I sat in a chair on top of a mat in a semi-circle surrounded by women 30 years my senior. The women already seated seemed like pros at this.

After I settled in, it wasn’t really any different than a traditional yoga class. One seat was reserved for someone who always had to be next to the door. One had to have pink weights. One wanted cork blocks instead of foam.

Once class began, it was different than a traditional class. The instructor asked if we wanted to share what we wanted to work on and what, if any, pain we had. When people started sharing, I realized that nobody could see my physical pain. Nobody knew what I had been dealing with. Nobody could see my bruises, nerve damage, or fresh scars.

When the asana, or poses, part of class began, I actually understood the mantra that I preached for the first time.

Those mantras that yoga teachers say—“Do what you can,” “You can stay in child’s pose and you’re still doing yoga,” and “Just breathe”—finally clicked. As the instructor guided us through gentle warriors with the aid of the back of a folding chair, I couldn’t concentrate on anything except for what I was doing in that moment.

I chuckled to myself as I thought about little Alana, my constant worrier in class and the one I direct my mantra to weekly. I was no different from her. I filled my headspace with judgy thoughts of sitting by the door, the pink weights, and cork blocks just like she complained that Jack started cutting before I told him to, Quinn used the red crayon instead of the blue to color in the sky, and Liam mixed the paints therefore ruining them for the entire table.

The only difference was that I had a filter to not say these things aloud. These thoughts rapidly disappeared as I had to use my breath like never before to get through basic poses.

My husband, who was suffering in his own way, was in the same boat. Each of us could barely focus on anything except ourselves—even thinking about each other was too much at first.

Lately, it feels like we’re getting closer to our pre-accident lives. We are working through our eight-hour shifts, planning meals for the week, setting up double dates, and I am back to a “regular” yoga class on top of my continued physical therapy. We celebrated each of these milestones with a variety of festivities, including high-fives and dinners.

But a lot of things are different. I no longer type while I chat with people. I focus my attention on who I am talking to. I don’t eat meals in front of a screen and my food tastes better. I don’t judge co-workers for not picking up the phone fast enough, or misspelling a word, or coming in a few minutes late. I don’t know what they are dealing with when they’re not spending eight hours a day with me.

I feel so free and focused as I begin truly living in my own world. Even though I’ve been practicing yoga and meditation for years, I have finally been able to move toward a new level of mindfulness I wasn’t able to attain before.

As I get back to my children’s programs, my little worrier has not changed. Alana’s hand still shoots up simultaneously as she shouts about some kind of wrongdoing by one of her table mates. I wish she could really comprehend what it is that I’m trying to instill in her. I wish she could put blinders on and taste how different her goldfish snack could be if she focused on chewing instead of how many more goldfish Jack got than her. I wish she would see how beautiful her coloring skills are when she manages to create a variegated white to blue summer sky using the basic eight crayon pack. I wish she could accept Liam’s “mistake” and use a new shade of brown to paint the tree roots instead of avoiding the color altogether.

When her hand rises up with a complaint, I still sometimes utter my little “worry about yourself” mantra to her. Usually only when my patience is used up for the day. Otherwise, I try to guide her gently to a new way of thinking, hoping that the words will someday click for her as they did for me.

Until that happens, I will do my best to give her a sympathetic smile, a gentle rub on the back, and a simple “I know.” 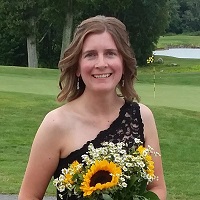