Why & How we’re Withholding Exactly what we need From Ourselves. {Book Excerpt} 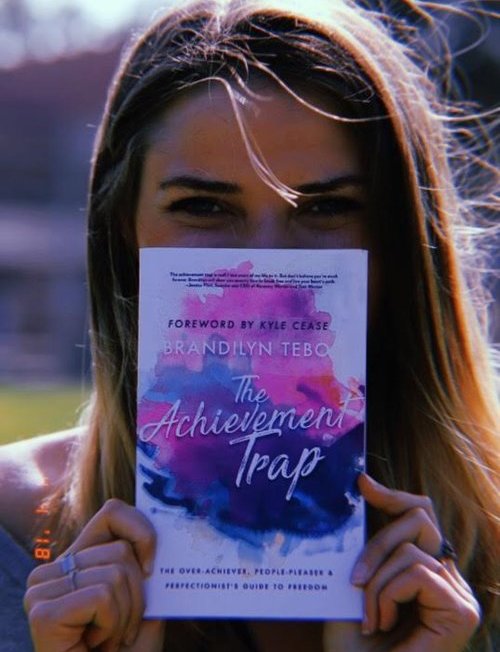 The following is an excerpt from Brandilyn’s #1 bestselling book on Amazon, The Achievement Trap.

*Editor’s Note: Here at elephant, we’re notorious bookworms—we love them, and want you to love them, too. But, recently, we found out books are evil—one of the worst things for the environment. Before you buy your next book, read this and this. Keep reading, but read responsibly.
~

Love the stuff you suck at.

When I was in 8th grade, we had to run a timed mile.

It was 95 degrees outside, and I had never run before in my life. I got four laps into the 16-lap mile when the feeling of physical nausea and mental panic descended. As the vomit was rising in my throat, the voices in my head were screaming at me—saying that if I stopped, I was a failure.

I forced myself to finish the mile, behind the majority of my class, and then I promptly vomited. In that moment, I decided that I wasn’t a good enough runner to run.

In the following years, I took up yoga, zumba, hiking, kick-boxing, weight training, and pilates—but not running. Never running.

I felt I wasn’t “allowed” to run, unless I was certain that I could do it fast enough and well enough. I was jealous of my friends who were runners.

And then one day, when I was 19, I was in South America and I didn’t have access to a gym, a mountain, or exercise classes, but I wanted the endorphins of physical activity. I begrudgingly borrowed sneakers and set out on a run around the city.

I ran through the shopping district and through quaint little neighborhoods. I ran by the water as the sun was setting. I stepped over sleeping dogs who were tied to light posts by their owners in nearby restaurants. I dodged teenagers skateboarding down the sidewalk. I began smiling at everyone I passed—I felt part of their world for a brief moment. I began to feel more a part of the city and involved in my surroundings.

I loved it so much that I didn’t even realize what pace I ran at. I realized that I’m allowed to enjoy running, even if I’m terrible at it. That I don’t have to prove anything by running. That I can run for the hell of it. That I was a runner simply because I ran.

Now, I run half-marathons. Not to be better than anyone or add another accomplishment to my belt, but simply because I like to run.

I sometimes still feel that rising sensation of nausea when I run, but I allow myself to stop or slow down and I don’t make that mean anything about how strong or determined I am.

I don’t only get fulfillment from running in the moment that I cross the finish line, but all along the way. I no longer use running to prove anything to anyone, but just as an opportunity to be grateful for my body’s ability to move through the world.

I never use running as self-punishment, but as a loving practice to expand my awareness of my surroundings. I sometimes run slower than I think I should, but I don’t pay mind to judgements about what running should be like. I stay connected to the feelings in my body as I run rather than trying to conquer them.

Truth is, most of my 8th grade class would still outrun me. So, while I haven’t yet achieved an eight-minute mile, I have learned to honor my body, release comparison and self-judgement, and accept wherever I’m at. When we give ourselves permission to enjoy even the things we suck at, we open ourselves to a world of new experiences.

Most people set goals because they are deluded into thinking that achieving the goal will alter how they feel about themselves. But it’s an illusion to think that achieving goals makes us more confident or happier. In reality, we achieve a goal and then we give ourselves permission to be confident and happier. The two aren’t actually connected. We don’t need the goal in order to feel that way—we just act like we do.

Call a goal you are working on into mind. Ask yourself “what way of being do I think the achievement of this goal is going to give me?” and then give yourself permission to feel that now.

Maybe deep down you believe that becoming famous will make others respect you. If that’s the case, then ask yourself: “What would it look like for me to start respecting myself more right now?”

Or maybe you think that having a six pack will make you feel proud. If so, ask yourself: “What would it look like for me to start being proud of myself now?”

Typically, the thing you’re seeking in the goal is exactly the thing you need to give yourself. The belief that this external achievement will complete you is an illusion.

Whatever feeling or way of being you think is missing from the outside is the very thing that you are withholding from yourself. We tend to believe that once others feel a certain way about us, we will feel that way about ourselves.

But the truth is (cue Natasha Bedingfield) no one else can feel it for you. Only you can let it in.