The Buddhist version of “Thoughts and Prayers.”

I’ve been thinking a lot lately about the notion of “thoughts and prayers.”

It’s said so often in response to the tragic and the atrocious that many folks are starting to point out that it’s meaningless lip service.

But it doesn’t have to be this way.

Thoughts and prayers can be incredibly meaningful when they move us to action or transform our relationship to pain. I first began to understand this notion of how we can think or pray in meaningful ways through doing the Buddhist practice of Tonglen—sending and receiving on the breath.

When I first started doing Tonglen, I had been living in London for less than a year. I was depressed, missed my family and friends, and was experiencing culture shock. Even though I didn’t realise it until much later, I was also in an emotionally abusive relationship, which added to my feelings of alienation and loneliness.

I was in a city of millions and had no one to confide in.

This hurt and loneliness was aggravated by my experience of riding the London Underground (commonly known as the Tube) to and from work every day. While it’s an amazing transport system, it is also a tightly packed, crowded tube of human emotion.

Imagine a bunch of people—who are any combination of irritable, tired, frustrated, and impatient—thinking only of their own trajectory. Add in the deep cultural upbringing carried by many of these commuters that taught them to suppress emotions and never talk about how they feel because it’s “private.” Sprinkle in a few oblivious tourists talking too loudly, add folks from cultural backgrounds where social norms are different, and cram them all together in a very small space where there is an unwritten but strongly felt rule that interacting is not allowed.

My morning commute was wracked with anxiety. I felt awful. I was stressed at home, stressed at work, and stressed on my way to and from work. My only comfort was listening to talks by Pema Chödrön, who I always turned to like a salve for my suffering.

Up until this point in my practice, I rarely applied anything she was talking about to my life. I merely gained a sense of comfort while listening to her, which quickly evaporated when I removed my headphones.

But on this one particular day, after watching two of my fellow commuters tussle and nearly come to blows, I started paying attention to the instructions she was giving. I looked around the crowded car, taking in the individuals who surrounded me, as Pema gave the instruction to think: may I feel this so no one else has to.

Even though it felt awful, and even though I was afraid to do it, I followed her instructions and breathed in anxiety—a fluttering heart, clenched muscles, fizzing stomach, lump in the throat, claustrophobia, and suffocating. I rephrased her wording to, “Since I am feeling this anyway, may I feel it so no one else has to,” and then I breathed out comfort—a clear blue sky without a cloud in sight, soaring mountain peaks, the fresh smell of pine, a cool breeze, and a vast, open space.

I didn’t last long—maybe three breaths in, and I couldn’t do it anymore.

But the next day, I tried again. This time, I focused on depression. I notice how tired my limbs were, how the day had not even properly begun and already, I wanted to crawl into bed and sleep forever. I breathed this in, so no one else had to, and I breathed out productive, energetic enthusiasm—a sense of achievement, of ticking off the last thing from a long to-do list, of the comfortable sort of tired felt at the end of a long day of satisfying physical labour.

I switched it up each day, and it soon became a game of testing myself on how long I could go and what kind of pain I was able to sit with. It became a reminder too, each and every time, that other people also suffer, and therefore suffering did not make me special.

By extension, as I thought of all the other people were also depressed or anxious, I felt less lonely and could see all these emotions tenderly, as human.

And then one day, after about a year of doing Tonglen on the Underground, my heart totally opened.

I looked around the crowded train car at all the faces, and I wanted to gather every single person there up in my arms and tell them they were worthy of love and that I knew this because I loved them. When the train got to my stop, I stepped off and felt the tug to hug in my biceps as I passed commuters going every which way. I wanted to hug the Underground staff. I wanted to hug the man sitting on the corner, wrapped in a blanket, with a cup for coins in front of him. When I got to the office and the people I worked with arrived, I wanted to hug each of them too. Even seeing the CEO, who I did not particularly like, did not diminish the love I wanted to express.

The feeling lasted all day, right up until I went to sleep.

The next morning it was gone, but the wisdom and effect of it were not.

I had begun moving from “I am suffering” to “there is suffering” and found in that the capacity we all have to care for each other by showing up for the inevitable difficulties of life. And all it took was thinking, each and every day, about others. It took the phrase, or prayer, “May I feel this so no one else has to.” It took a willingness and commitment to turn a sentiment into a practice.

So, don’t be too quick to dismiss thoughts and prayers. It’s not the thoughts or prayers that are the problem, but whether we think and pray in ways that transform us at our very core. 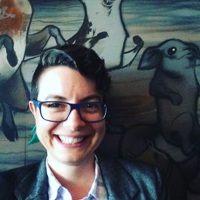 Please Don’t Stop Sending your Thoughts & Prayers to Those Suffering. An Easy Way to Help in Addition to “Thoughts and Prayers.”