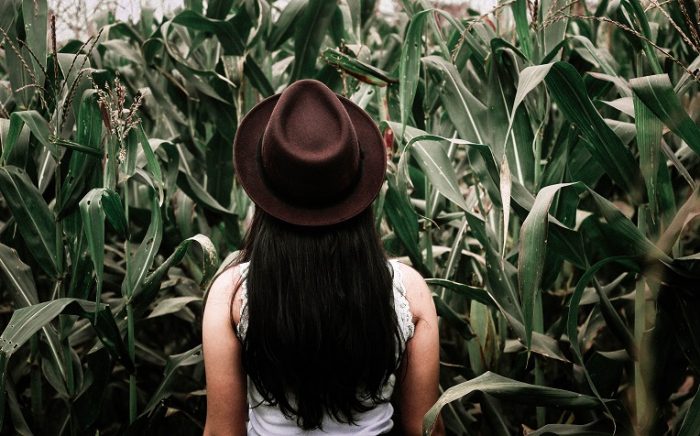 The harvest moon rises on September 24th, the closest full moon to the September equinox.

Native Americans call it the Corn Moon, a time to celebrate the abundance of the earth and harvest their fields of ripened corn.

My family descends, in part, from the native people of the Caribbean: the Caribs, cousins to the Native Americans on the mainland. We are called Black Caribs, and have a deep bond with nature, with the sun, the moon, and the stars.

My grandmother was a storyteller. Every full moon she would gather her children and grandchildren around a small bonfire in her garden and tell us a timeless tale. A story that her grandmother had told her as a child, and her grandmother before that, and so on and so on I imagine…back to the first moonrise and the first people.

There was a time when there was no moon, and the people lived by the light of the stars at night, and the sun by day.

Every September, when the corn ripened, the people hurried to harvest their crop before the sun set earlier each day. One morning, they went to the fields and saw much of their corn had been eaten by animals in the night, and they knew they would be hungry that winter.

There was a girl among the people called Shenandoah. Her name means daughter of the stars. The following year at harvest time, Shenandoah was determined that her people would not go hungry again.

Before the sunset, she ran to the horizon in the west with a feathered hunting spear in her hand. Reaching the horizon at dusk, she plunged the end of her spear into the heart of the sun and it burst into flames.

With her burning sunspear, Shenandoah ran all through the night and the next day until she reached the horizon in the east and the mountains. Then, she climbed as high as she could before the sun slipped away again.

Far below her she could see her people racing against the fading sun to harvest their September corn. Shenandoah Sunspear hurriedly gathered dry wood and built a great fire on the mountainside, and its light shone out all across the valley.

Her people looked up at the light and rejoiced, thinking the sun had made a daughter with flaming hair. That night they sang and harvested all of their crops by the new light of the sun’s newborn daughter, and they knew they would not be hungry that winter.

Shenandoah looked down and smiled at seeing her people finish the harvest, but her body was spent from her great journey from horizon to horizon, and that night she lay down peacefully on the mountainside and died beside the fire.

Her spirit rose up with the fire-smoke and her flaming spear into the night sky, and she became known as the moon, daughter of the sun and the stars.

And so it happened. Even now it is so.

In many parts of the world, September is still the final harvest before the winter months, and the harvest festival is still celebrated in many cultures, with food, music, and dancing in the moonlight.

Harvest comes from the old English word hærfest, meaning autumn. It was English settlers who took their harvest festival tradition to New England in the 1620s and it became the Thanksgiving celebration that we know today.

Many of us now live in modern urban environments, yet it is still possible to find our connection to these natural cosmic cycles of the moon, the sun, and stars, and incorporate their significance and celebration into our lives, much like our ancestors have done for millennia.

Perhaps we don’t all have the time or the means to grow our own food, but we are becoming increasingly aware of the benefits of eating locally grown and organic produce. Farmer’s markets, even in many cities, are becoming ever more popular with ever more conscious consumers. The marketplace has always provided a great opportunity to support the farmers who feed us and build a sense of community with our neighbours.

In our modern cultures there is often a sense of lacking a larger community beyond our immediate circle that detaches us from each other and perpetuates feelings of alienation and loneliness.

This full moon is an ideal time to reach outside of our immediate circle to our larger community, a time to show our gratitude for each other with a small act of kindness to a friend or a stranger.

With so much New Age spirituality focused on self, we have cultivated a vicious circle of codependents and enablers, of narcissists and empaths, each pointing accusingly at the other.

The full harvest moon is a time to let go of these destructive dynamics, a time to surrender the self and embrace the larger Self that is the community of humanity and the abundant earth that feeds us all.

We first. Not me first.

Dedicated to my grandmother, Eden Lewis.