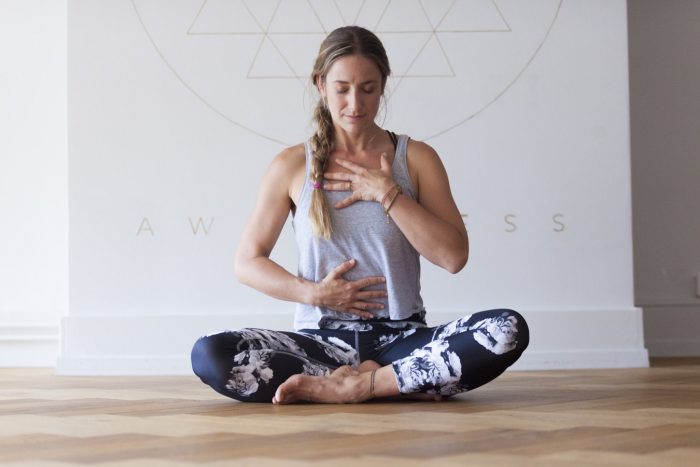 Can the way we breathe impact our digestion?

Is it possible that pranayama (yogic breathing) can help manage our gut issues while also calming our stress response?

It’s been my experience that indeed it is possible.

A few years ago, I was diagnosed with an inflammatory bowel condition. It was scary to see blood accompany every bowel movement and not know what was going on.

To better understand what was happening to me, I started researching.

I came to discover that digestive disorders like IBS (irritable bowel syndrome) and IBD (inflammatory bowel disease) are on the rise.

IBS is one of the most common digestive disorders, affecting approximately 10 to 15 percent of people worldwide. In the United States, IBD affects approximately 1.3 percent of the population (about three million of us).

I was treated by one of the leading gastroenterologists in Sydney, Australia, and this is what he told me:

“You have ulcerative proctitis. There is no known cause and no known cure for this condition. It will come and go unexpectedly throughout your life. The only thing we can do is see if the medication will help keep it at bay.”

I refused to accept his gloomy prognosis.

I refused to believe that there weren’t other alternative tools and resources that could help me manage my condition without having to rely on drugs for the rest of my life.

So I began my own research and turned to my yogic practice for answers and inspiration.

I was surprised to discover that multiple studies and research seemed to indicate that a consistent pranayama (yogic breathing) practice can be helpful in the treatment and management of chronic digestive disorders like IBS and IBD.

I believe this is because pranayama can help us tap into our own inherent wisdom and intelligence, thereby tapping into our body’s intelligence.

Our body’s intelligence is expressed via our nervous system, which sends, receives, and processes information and messages throughout the body in order to make sure all systems are functioning properly.

Our brains contain about 100 billion neurons. But we also have a second brain located in the folds of our intestines.

This second brain (our gut-brain) contains approximately 200 to 600 million neurons.

It’s believed that there’s some sort of breakdown in communication between the two brains in digestive disorders such as IBS and IBD.

The important nerve that connects the head-brain and gut-brain and impacts digestion.

There’s a nerve that runs from the base of the brain through the face and chest down to the digestive organs. It’s called the vagus nerve, and it’s critical to our digestive health.

This nerve has connection points in the stomach, liver, gallbladder, pancreas, and small and large intestines.

The vagus nerve also impacts the quality of our digestive health by influencing:

Pranayama appears to help improve the communication between the head-brain and gut-brain by stimulating the vagus nerve.

What chronic stress and anxiety do to digestive function.

There are two branches of our nervous system that impact digestion:

The sympathetic nervous system (SNS) acts like a gas pedal, which mobilizes and expends energy in moments of perceived stress or threat. This branch oversees the “flight, fight, freeze” or “stress” response.

The parasympathetic nervous system (PSNS) acts like a brake pedal, which helps us recover from stress by conserving energy. This branch oversees the “rest and digest” or “relaxation” response.

When our SNS is activated (especially if we’re chronically stressed), digestion becomes impaired.

Pranayama can be an effective tool for managing both mood and digestive woes.

We can increase our inner calm while improving digestive woes by simply manipulating our breath in certain ways. This unlocks our body’s inherent healing and soothing capacity.

Sara Kinsinger, Ph.D., a psychologist who specializes in treating patients with digestive issues like IBS and IBD, explains it like this:

“The “fight or flight” response causes blood to move from the gut to the larger muscles, which interferes with digestion, weakens the immune system, and increases inflammation.

These changes don’t last long, and in the short-term, they are not harmful and may even be helpful, but when they happen again and again over time, they can hurt your health.

The good news is, you can learn to turn off this automatic response through deep breathing.”

One study found that a combination of breathing, movement, and meditation was associated with significant mental and physical improvements in patients with IBD. Even their inflammatory markers showed significant improvements after just 26 weeks of breathwork practice.

Another study found that a combination of different pranayama techniques performed regularly together caused vagus nerve stimulation, which in turn improved bowel function.

In yet another study, yogic versus conventional treatment was assessed in patients with IBS. After two months, those who underwent the yogic treatment consisting of a series of asanas (poses) and pranayama showed increased parasympathetic activity (“rest and digest” relaxation response) of the digestive tract and decreased stress.

How to begin using pranayama for digestive disorders.

There are different types of pranayama, and not all of them will stimulate the vagus nerve by activating parasympathetic activity (some techniques will actually do the opposite).

It’s best to seek the guidance of an experienced yoga teacher when we’re just starting out with pranayama, especially if we’re experiencing chronic digestive issues or anxiety.

Here’s a simple and evidence-based breathing technique I use myself before and after meals, and also during stressful moments:

1. Breathe in through the belly for five counts. (Lower belly expands and the chest shouldn’t be moving.)

2. Exhale for eight counts. (Lower belly should contract inwardly here, the chest should be still.)

3. For full effect, repeat this breathing pattern for at least three minutes each session. 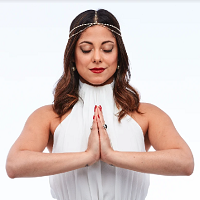