Let’s Cross Over into this kind of Love. 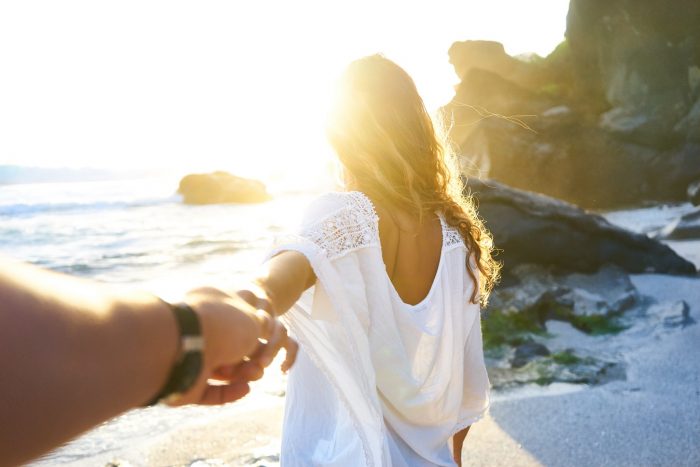 Life seems to happen within moments of normality in which we usher ourselves between our commitments and our desires.

And somewhere in between it all, we get a few seconds of happiness to ourselves. We get one tenth of our lives to ourselves, and it’s not that we’re selfish, but sometimes we’d like our lives to be more about us than anyone else.

And it’s easy to say that when we have these hearts that bloom so full under the midsummer moon, but maybe it’s really just about finding that balance, that space between life and magic.

Maybe that is where love exists—where we could meet each other.

We began as an accidental meeting of two souls who had a purpose greater than just us and the wants of our egos.

We began with minds that were in progress, with hearts that were still growing. We began as a foolish game in which we had no idea just how much there was to learn.

But even in everything we hid, ignored, or buried, a truth permeated us. It whispered that there was more to all of this than we could ever imagine. At times, our paths took us in opposite directions—but no matter how far we traveled from one another, we were still always on track to come back together.

We were something that, while undefined, formed a connection so deep that it was impossible to truly cut the threads that bind us.

Perhaps it was in that realization that clarity grew. For while this was something neither of us wanted, and it was never our dream, it seemed to have been orchestrated centuries ago by a hand more wise than our own. And so, stumbling at times, we still grew, we still took chances, and we still made the choice to explore all that lingered between us.

But we are far from perfect, and it’s all still a process—of learning not to run from love, of believing in the impossible, of surrendering and letting ourselves be led despite how different this life looks from the one we imagined.

A process of becoming us.

We’ve spoken of the long road to love, and I suppose if we were to label our journey, it would be just that.

We’ve taken our time—not because that’s what we wanted, but because if we had gone any faster we might have missed just how special this truly is. And I know now, without a shadow of a doubt, that your arms will forever be home.

I know now that there will never be another.

I can’t sit here and profess the ignorant innocence of a first love, one that is everything we want, but without any of the reality we need. I won’t speak of guarantees because if life has taught me anything, it’s that there are none. But if I was going to make a bet, we’d be the closest to a sure thing I’d ever take a chance on. Not because we have this all figured out—maybe we don’t—but because I’m realizing it’s our spaces, it’s our not knowing that make us strong in love.

There is no map that I can draw to “happily ever after.”

And forever? Well, that is what we will make of it—if it’s something that we truly want. See, I know now that while love is everything, it’s still not the only thing. The why matters, as does the motivation to bring our love and our reason together—and that is what will transform our single moments into a beautiful forever.

I’m not done growing, and I can’t promise who I’ll be tomorrow, but I am certain that I’ll still love you when the sun rises. I can’t say that I won’t ever get triggered, or that I won’t push us both toward better versions of ourselves—causing the growing pains that self-improvement often does.

But I do know that being happy with ourselves individually will always remain more important than any sort of relationship standard.

I understand, now, that delicate balance between life and magic.

I know that love grows best when it’s free. Yes, we all have needs, but once we grasp that our partner’s well-being is just as crucial as the health of our relationship, we can start to see things differently. We start to love differently.

I’ve loved you for some time, but it’s never been the same love the whole way through—and I don’t expect it to someday plateau into a state of regularity. Each time I look at you, I notice something different, a different level of awareness, a different you—and to love all of you is one of my life’s greatest joys and purpose.

You inspire me. You raise me up and support me when I stumble, not through gifts or words that drip like honey, but in honesty, in sincerity, in the common, comforting words spoken from an uncommon man.

And so I know neither of us are finished, and we can’t say for certain what tomorrow may hold, but I do know that I want it to be you that holds me as the new day arises. I know that I’m ready for whatever secrets tomorrow has up her sleeve. And I am ready not only because of you and the love you have shown me, but because of the work we have each done in wrestling our demons. I know now that I can create hope just as easily as I used to wallow in fear—it just depends on how I want to feed my future.

I no longer fear being happy, nor do I fear love, and I especially no longer worry if we’ll last forever. Because when we have this kind of love, when we have faith in ourselves and another, fear is a burden too heavy to carry, and we put it down.

And hope is what sets us free.

So let’s cross over. Let’s cross over the threshold to tomorrow, to our future, to the dreams we never knew existed and the reality that was too sweet to believe.

Let’s cross over because regardless of what may happen, you’re the chance I’ll never regret taking.