Why this battle is actually Serena vs. Herself. 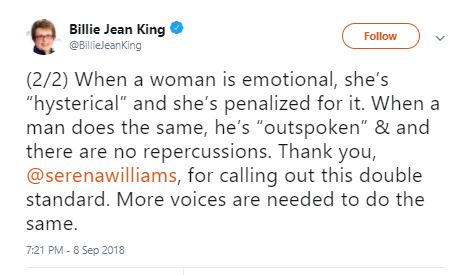 The controversy at the Women’s US Open Tennis Final between perennial champion Serena Williams and talented upstart, Naomi Osaka, was, dare I say, a “welcome” reprieve from left versus right politics, the latest Trump absurdity, and our usual Sunday morning armchair arguments.

It has given us something different to fight about.

In reading some of the comments on social media regarding the event, it’s easy to conclude that people either vehemently oppose Serena’s actions on the court, or they see this tumultuous event as an opportunity to expose the double standard that women (at home, at work, and in sports) simply live with.

What would this country be if not for our differences of opinion? If not for issues that divide? If not for polarizing people and events?

Many opinions can coexist in this case.

We can be happy that Naomi took home her first trophy at such a young age and held herself together to beat a living legend in a Grand Slam Championship match. We can applaud her for playing an amazing match, and showing sportsmanship throughout the two-set bout.

We can also agree that Serena’s tirade tarnished Naomi’s big win, and that she showed the uglier side of competitive sports. In the same breath, we can note that double standards exist, and Serena has a valid point in her bone of contention with the umpire. These points can marinate together, without undermining each other’s value to the conversation.

For once, everyone is right. How refreshing!

First and foremost, kudos to Naomi Osaka. She won, fair and square. She outplayed Serena, start to finish. Naomi was composed, strong, and focused throughout the match. She displayed the kind of sportsmanship we all wish to see in sports—at any level. She played like the champion she surely is.

In dueling contrast to that opinion, Serena caught a bad break (albeit of her own making). She overreacted to the “coaching violation” (she took it far too personally), and then she let the situation snowball into something bigger because she couldn’t shake it off. It was frustrating to watch her unravel. Her anger was disruptive to the match and annoying for spectators to watch as it unfolded. She allowed her reaction to get the best of her. While this is not at odds with her style of passionate tennis, it is very much at odds with her level of experience.

Nothing excuses bad behavior on the court.

Make no mistake, this was not Serena’s best moment, but she is human.

Those who watch tennis often know that there are countless examples of men dropping pointed remarks and expletives that are or were more blatantly aggressive at umpires during matches—and have not been penalized a whole game for it. Men are allowed to have tempers, women are not.

Just check out Andy Roddick’s diatribe in 2011, at the US Open, and his chastising of the umpire. Or, go to YouTube, and you’ll find multiple examples of different male players throwing tantrums (and rackets) without penalty. It is a double standard in competitive tennis, and as with most institutions, it’s also slowly being revealed.

Another example occurred recently, too. A male tennis player was allowed to change his shirt on the court, but not a woman player. She was penalized with a code violation, and he wasn’t. Backlash ensued over the blatant sexism, and the rule was changed just a few short weeks ago. If the rules are the same across the board, and enforced as such, there can be no questions or arguments from either side.

In this match, one game would not have made a difference. Osaka was excellent. She was far more consistent, and she soundly beat Serena for the title—there’s no denying that.

Serena’s outburst and subsequent penalties have sparked continued discussion about double standards in sports decorum. Ultimately, Naomi Osaka will benefit from the promotion of women’s equality in athletics that Serena stands behind.

One can say what they want about Serena: we don’t like her outfits, she’s too thick, she’s too outspoken, she’s too this, or she’s too that. Despite how we feel about her, she is doing a lot for women’s sports—even if it’s clumsy at times.

We are also too quick to vilify female athletes for becoming angry (“she’s crazy”), and excuse their male counterparts (“he’s competitive”) when they act out. Not all athletes are wired the same way. Those we hold in high regard are not one-size-fits-all. Competitors show up with quiet confidence, or they trounce with outspoken fierceness. They conquer with flash and fanfare, or they modestly make their mark.

Correcting a mistake is as important as doing things the right way in the first place.

At the podium, Serena embraced the young winner, calling for an end to the negativity. She called upon her supporters to stop booing and making such a fuss, which is actually quite an important moment to acknowledge, because that too is good conduct—whether you like Serena and the way things unfolded, or not.

Serena created the drama, yes, but she also recognized the need to turn it around, and it’s worth mentioning because she did what most male tennis players who lose their cool on the tennis court do not do; embraced her opponent, whispered encouragement,  conceded the win, and she gave credit where credit was due.

On Saturday, the winner accepted her trophy with her visor pulled down over her eyes. This is not okay on so many levels.

My hope is that Serena recognizes how wrong this is and continues to correct her mistake.

My bigger hope is for all women to continue championing women’s equality without picking sides. In this argument, all sides matter, but let’s not make it another catalyst for division. Especially among women. We have enough of those.