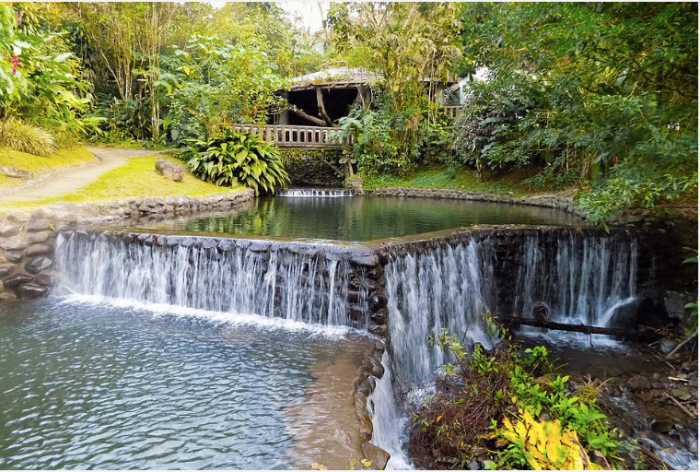 Long talk with dear friend Durga, who I last saw 20 years ago. Veggie wraps, angry phone call to my room (we stole one, inadvertently, apparently, but Durga needs to eat?). I shrug and apologize.

Breakfast. Spiky fruit with eyeball inside with seed inside that, dark seeds in white gelatinous slushy bowl fruit, hard fruit with something salty in it…as well as papaya, good coffee gone bad, mango. Nothing like 3 new never-before-seen foods before 9 am to make a day get off on the right note.

Reunion with Toby, who used to work with Elephant. I’ve known her a little since she was still at Middlebury, in school. A great writer and entrepreneur, now leading this and other trips, teaching yoga, living the expat life. Proud of her.

She and Ellie both great examples of Academy’s mission and success in what we offer, I hope.

I work furiously during/after breakfast, reediting and updating major change to how writers at Elephant get paid—bringing in line with new and still-emerging Ecosystem, which I’ve been working on for 9 years, and which thanks to Dave, William, and Brian is actually happening now. It’s half up, its various parts just starting to connect up together. The Ecosystem is my answer to Facebook’s existential threat to journalism—let’s game-ify the act or reading and writing, paying writers to do quality (not just popular) work—and in so doing turn Elephant from a major web site into a minor platform, independent of Facebook’s whims that have sent us from 23 million unique readers a month to 4 million over the past four years—that after 7 years of hard work to grow from nothing (we used to be print, that transition put my dear home into foreclosure).

I call best friend and Elephant colleague Dave, FaceTime by the Inn’s pool just outside of the breakfast bar, he’s happy for me—he more than anyone on this earth has helped me get traveling and get good at traveling, finally. For so many years I worked, poor, worked, stayed put or traveled to conferences around the US.

We drive all day, off and on. On the way: lunch at a good place with an ornate oxen yoke on the wall (just left Halifax, where they had three simple ox yokes on the wall). Lion! Bright!

On the way, jokes and bonding, a stop to see fields of horses and cows and, later, a family or group of howler monkeys, the first monkeys I’ve ever seen in the wild. Tons of photos of the volcano that our posh bus draws every closer to. Another stop at a tourism center for a toast or two and a rather pointless greeting. Still, nice, friendly, I’m eager to run around and explore. Sitting by dear Durga, after our long talk last night, our long type talk on Facebook a few months ago—so dear to reconnect with such a powerful, sane, accomplished, beautiful Dharma sister.

I sit in a romantic mosquito net having just read Dharma by DKR in the hammock while it rains onto the flowery mountainous jungle dotted with bungalows, like the one I’m in, with living roofs atop them. It’s a simple village in harmony with nature, here, like out of Babar. Tomorrow we’ll tour where we are—Rancho Margot—a sustainable restaurant and ranch and retreat and farm that’s received media attention around the world.

A firefly, outside my screen door. The whistle and chirp and hum of millions of insects and birds and the pitter fall of rain on giant leaves.

Dinner—99% local-made, including the dairy and meat for those who eat dairy and meat (I’m vegano, but view factory farming as the first great enemy of environmental and responsible living). We all introduce ourselves, hearing stories of entrepreneurship and diverse paths, all coming together for these few days. I eat two plates-full of beans and rice and fruit and hot sauce and veggies. Others eat “farm-to-table pizza,” as one participant jokingly calls it. But it’s true. A brief moment with Durga in the bar—a moment I couldn’t place in the 1950s, 1970s, 1990s, or now if not for the glowing screens in front of a few patrons. We walk a long dark path in silence to a candlelit welcome ceremony led by Toby, beneath a living roof beneath the falling rain beside a roaring river beneath the mountainous jungles beneath the enfolding mists. We share aspirations and where we’re at. May it be of benefit!

I go home, fall asleep by 9 pm beneath a mosquito net.

Wake at 6, fiddle with my phone, which is no longer charging, meditate, shower, push-ups, greet the misty jungle. This is the kind of thing I’d really only seen in youtube videos or brochures until a few years back. Travel. Such a privilege, to be done mindfully, eco-responsibly, an opportunity to connect and support local cultures and communities. An honor and pleasure to be here.

A yoga class with Toby, only my fifth class in 2 years since my surfing injury nearly paralyzed my right arm. PVC yoga mats.

Breakfast—not much vegano, but coffee counts. And a little local banana. A hearty debate about respecting other cultures and language and Trump and love and talking to those we might disagree with. Fun with my fellow press, although one I feel doesn’t like me. That’s how we humans are. I get juice for a friend, I get voted down (no one else wants to learn soap-making), we vote for a guided hike instead. I want to do both, as usual, it’s my approach to life.

Sending this via wifi that doesn’t work, much, from a jungle on a permaculture farm in Costa Rica.

A week in Costa Rica.

With thanks to colleagues and hosts for this press trip: