This Halloween, Forget Trick-or-Treating—Dance with the Dead Instead. 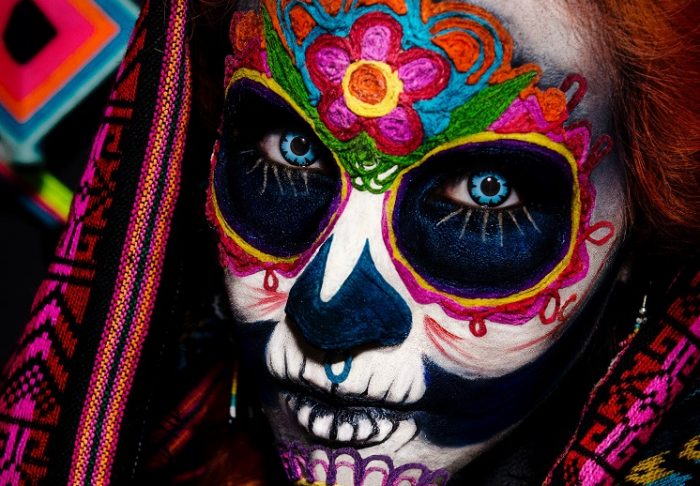 Halloween—meaning holy evening—has a rich and fascinating history, going back thousands of years.

All Hallows’ Eve has become a modern mishmash of old pagan and younger Christian traditions. In many parts of the world, the festival is also known as Day of the Dead—a fusion of pre-Columbian, African, and Christian observances and rituals, a three-day event that actually just gets started on October 31st.

Particularly in many Latin American and Caribbean countries, the Day of the Dead is a sacred occasion for families to build a shrine in their homes or their cemetery, and to fill it with flowers, food, and photographs of the departed. They illuminate their blessed altar with candles and coloured lanterns, and happily reminisce the dead.

A feast of food is prepared, festive music is played, and humorous stories of passed loved ones are shared to celebrate the reciprocal relationship between life and death. Children are encouraged to create their own shrines in remembrance of los angelitos—the departed children of their family.

In stark contrast, Western culture often has an uneasy relationship with death. Like politics and religion, death is something we are taught not to talk about or directly address. This considered, perhaps it is not surprising that these aspects of life often manifest later in something of an unholy mess.

Conversation about the dead is often branded morbid, and we are encouraged to quickly move on to other subjects, perpetuating our uncomfortable and awkward relationship with death.

As a consequence, it is not uncommon that some of us are not even sure how to mourn—because no one has really taken the time to teach us about loss. Instead, we have to read a self-help book on how to deal with death, or perhaps find our way to a therapist to acquire the tools to find our way through the five stages of grief. Or else many of us just suffer in silence.

The heritage of my Caribbean culture is quite different. My grandmother often spoke about death to her houseful of grandchildren. While she was cooking, or sitting at the dinner table, she would habitually tell us an allegorical folktale to prepare us for both the trials of life and the determination of death.

I realise now that the purpose of those generational stories was not just to entertain us, but also to educate us.

My grandmother was something of a rebel and she had prepared us well. We didn’t whisper about the sadness of her death—we sang loudly about the joy of her life instead. We did not feel loss because we had been taught that everything that has a beginning has an end, and the end is just a new beginning.

I never lost my grandmother, I see her paper-thin skin in the colour of every autumn leaf, I taste her winter soup in my sister’s cooking, I hear her sandy singing on a spring breeze, and I see her smile like summer in a stranger’s eyes.

On the day of her funeral, we walked to church with “Amazing Grace”on our lips, accompanied by a perambulating quartet: a drum set the momentum of our melancholy march, a trombone tethered our collective spirit, a trumpet gave our hearts the lustre of burnished brass, and a clarinet made our souls dance.

I cried joyful tears, along with my four sisters and two brothers, my mother, my aunts, uncles, and cousins. We danced, we wept, and we smiled, and there was a peace in our hearts that has always remained.

Since that time, my mother has died, some of my friends have died, and I have died a little bit every day, and I carry the same joy for them all, and for myself, to my grave. This is how I have been taught to live, and to die.

It is not the truth of death we should fear, but rather that we did not truly live.

Halloween can be so much more than just trick-or-treating, taking the guise of a ghost or ghoul, and unconscious consuming. It can also be an opportunity to embrace and accept the truth of death, rather than trying to protect ourselves from it. It can be a commemoration, a celebration, a joyful Day of the Dead for the ones we have loved and lost.