“Intelligence is the ability to adapt to change.” ~ Stephen Hawking

I was asked by a friend what we can do collectively to work toward a solution for climate change.

I proceeded to go through the laundry list of items we can do in our everyday lives to lessen our negative impact on the planet—things like eating less meat, using eco-friendly products, avoiding single use plastics, not buying things we don’t need, and living more simply.

Her response was, “I mean even deeper than that!”

Her inquiry inspired me to delve into what I feel is the deeper cause of the issue—because I feel there is a deeper cause, one that is important to address if we want to create lasting change.

The root cause of this issue (and just about every other man-made issue in existence) stems from two things that reside within each and every one of us to a certain degree; and some more than others.

Those two things are ignorance and an unchecked ego.

Remember when Ice Cube told us to “Check yo self before you wreck yo self”? He said that for good reason. If we don’t reflect on our actions and take a moment to learn how they impact any given situation, we could end up in some deep sh*t.

Fast-forward to present day: our willful ignorance and inflated self-importance has led us into other destructive behaviors that now have us fighting a battle to literally keep our heads above water. Let me explain.

Now, I’m going to get into yoga philosophy for a moment here, so if you’re not into that sort of thing, just stick with me; I promise I’m going somewhere with this.

As described in the Yoga Sutras, there are five obstacles that lead to suffering, called klesas, and each klesa is a result of the one that precedes it. The order of the klesas are as follows:

Notice what the first two are?

In the Yoga Sutras, ignorance and ego are described in a slightly different context than how we currently understand them, but the overall message still rings true. With ignorance comes ego. With ego comes attachment to things and the desire to acquire as much as possible (also known as greed). With the previous three comes aversion and hating on anything that threatens to take away the things that you desire or are attached to, and so on.

Just like the first two, we each have all of these within us to a certain degree, and if you think about it, we could probably pin the responsibility for our current climate change situation on all of them.

But I think it’s the first two that really get us into trouble because it is ignorance and ego that create resistance to the very thing we need to make things right: change.

For many, willful ignorance has become this “magical pill” that relieves them of taking responsibility or action. We’ve all heard the phrase, “Ignorance is bliss,” right? That’s because when we are confronted with something that compels us to make changes, there’s a level of discomfort that comes along with that. So, to avoid discomfort, we turn a blind eye and resort to stagnancy because that is what’s comfortable.

I’ve had people flat-out tell me, after attempting to discuss the enormous detrimental impacts that eating meat has on the planet, “I don’t want to know, because then that would mean I would have to change.”

When ignorance is paired with an unchecked ego, that same resistance to change can result in denial, which also results in a refusal to take responsibility or action.

In the case of climate change, some have denied—despite the mounting scientific evidence—that we are responsible for our current situation. The point will be argued ad nauseam, so long as that means that we don’t have to change or assume responsibility. (Again, avoidance of discomfort.) We won’t read the “10 Things You Can Do to Help Save the Earth” article because, “My actions won’t make a difference.” We scroll past the image of a plastic six-pack ring around a sea turtle’s disfigured shell because, “It’s too sad, and the problem is too big for any of us to tackle.” Or the biggest denial of them all, “Climate change is a hoax!”

Listen, I get it, change is a pain in the ass sometimes.

I’ve fallen victim to my own willful ignorance and unchecked ego more times than I can count. I get into the grocery store, forget my reusable bags in the trunk, and out of laziness I tell myself, “Eh, I’ll just use a plastic bag this one time” to justify my not walking back to the car to get them. (Spoiler alert: it hasn’t been just one time.) I’ve scrolled past my fair share of articles, because it’s like, “Enough already!” and I just don’t want to think about it. And there definitely has been a time or two (or a hundred) where I’ve told myself, “Why bother?” because I felt my actions wouldn’t make a difference.

Is this how I truly feel?

No. It’s just what was convenient at the time.

And, truth be told, because of my willful ignorance and unchecked ego, I was also resistant to change. I had a certain way of doing things and a lifestyle I had gotten accustomed to, and the thought of having to make changes that might impact my routine made me uncomfortable and resentful. (Also known as attachment and aversion—remember those klesas I mentioned earlier?)

But here’s the kicker: remaining ignorant to issues that need our attention (ahem, climate change) may provide temporary comfort or satisfaction, but in the long run, we end up suffering.

In contrast, if we become informed on the issues that need our attention and ride the waves of temporary discomfort, those waves of discomfort ultimately manifest into positive change.

However, the ability to manifest positive change when it comes to climate change relies on compromise and the willingness to work collectively. With so many issues needing our attention, coming up with solutions may seem like a daunting task. So, to ease the discomfort, maybe we can start with small changes—things like refusing single-use plastics, switching to an eco-friendly toothbrush, or switching from disposable napkins to reusable (or all three!)—and work our way up from there.

We can take a closer look at how we eat, how and what we buy, and how we live, and then become more informed on how those things impact our planet and adjust accordingly. Small changes become big changes when done collectively.

In this life, living on this planet, we are not an island; we are a microcosm of the macrocosm, a part of a whole that creates a ripple effect with everything we do, reaching far beyond where we ever thought possible.

It has already been said that we have the power to turn the tables here, and I do believe we have that power, individually and collectively, with our actions, our wallets, and a shift in perspective. Sure, we’ll have to take the blinders off, tell our egos to chill out for a bit, and get a little uncomfortable, but there is real potential for positive change in just about every situation—including climate change—if we are willing.

Because, as life has shown us—and will certainly continue to show us—“We are free to choose, but we are not free from the consequence of our choice.” 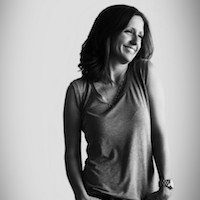