Why “Baby it’s Cold Outside” is about Feminism, Not Rape Culture.

The Truth about “Baby, It’s Cold Outside”

Editor’s note: Elephant is a diverse, reader-created community. We welcome all points of view, especially when offered mindfully. And so, with that grain of salt…bundle up and enjoy!

This is why historical context matters.

There is a war waging on the Christmas song (or is it a Holiday song now?) Baby it’s Cold Outside, with claims that it promotes date rape.

Written in 1944, this previously-beloved classic came from a time and place that looks nothing like our society today.

She’s staying because she wants to have sex.

That’s right, she wants to stay.

A man is not making her, a woman is deciding to on her own despite all the reasons society thinks she shouldn’t—and it’s romantic.

It doesn’t take much research—only some general historical knowledge of life in the 40s—to see this is not a rape anthem.

Broadway musical composer Frank Loesser wrote it especially for his wife to sing together at a housewarming party they hosted.

It was a playful bit.

A bantering between lovers and a play on the taboo idea that women “weren’t supposed to do that”—and was an instant hit with their partygoers.

His daughter, Susan Loesser, explains the main line that has some aflutter in moral outrage, “Say, what’s in this drink?”

“Flirting was a whole different thing back then,” she said. “People used to say: ‘What’s in this drink’ as a joke. You know, this drink is going straight to my head, so what’s in this drink? Back then, it didn’t mean you drugged me.”

This is why historical context matters.

I feel a touch of sadness imagining a generation growing up blind to the fact that anything happened before they were born—not having any nostalgia for times gone by.

By believing everything we read as “the truth” (without backing it up by verifying any information) we are going to start losing our perspective of the past and how it shaped us.

Actually, this song is also a solid feminist moment.

A testament to women (finally) feeling empowered by their own sexuality.

She goes through all the excuses, but her voice catches up to his in the chorus and they sing their desires to each other simultaneously.

But in 1944, the world was not as understanding and women weren’t supposed to openly embrace their sexuality. You certainly did not sleep over after a date—even though I’m sure there were women who wanted to—and a lot that did. It was just not discussed in public, let alone in a song.

In the lyrics, she is breaking out of the traditional mold she was created in—repercussions be damned and paving the way for it to be “acceptable” for women to be able to live life out loud as they choose.

Not much has changed with human desires—but the times sure have.

We don’t bat an eyelash at research today telling us that most third dates end in sex—and that it’s happening more and more on first dates, too.

Most dates today have no resemblance to what they used to look like—where courting mattered and you took care in creating something special for someone.

Maybe we should infuse a bit of the “time gone by era” into our fast-paced, technology-driven dating scene and veer away from the swiping life.

Real, passionate, below the surface talks where you look someone in the eye properly—and never pull out your phone.

We can’t afford to browse the headlines, clicking on what the hot topic is and take it at face value anymore.

This kind of moral outrage takes up space that we could be using for gun reform and mental illness. Let’s stop bonding over these misunderstood things and, instead, look together at the science behind climate change and have those conversations.

Remember when science mattered and in-depth reporting was respected?

So, when confronted with these ideas online—do a little research, check sources, and dig deeper, instead of shooting off at the hip. Change the channel, don’t purchase the song, and use this pent-up energy to invoke change that affects everyone.

Many variations of the song have been belted out over the years, with one version performed in the 1949 movie, Neptune’s Daughter, flipping the script and Betty Garret sings to Red Skelton all the reasons he should stay—and then she leans across him to switch off the light.

I prefer Dean Martin’s version of this song over all others, but my girls and I will forever love the silly duet with Zooey Deschanel and Will Ferrell from the movie, Elf, the most.

As I sit here writing and filled to my core with a deep, immense gratitude for having the choice today to be able to wish for a snowstorm, so that I may sit by the fire and not have to go outside in the cold.

I’ll also continue to be grateful to the pioneering men and women who paved the way for me to be able to put some records on and enjoy “a half a drink more” with whomever I choose.

I really can’t stay (But baby it’s cold outside)
I’ve got to away (But baby it’s cold outside)
This evening has been (Been hoping that you’d drop in)
So very nice (I’ll hold your hands, they’re just like ice)
My mother will start worry (Beautiful whats your hurry)
My father will be pacing the floor (Listen to the fireplace roar)
So really I’d better scurry (Beautiful please don’t hurry)
But maybe just a half a drink more (Put some records on while I pour)
The neighbors might think (Baby it’s bad out there)
Say what’s in this drink (No cabs to be had out there)
I wish I knew how (Your eyes are like starlight now)
To break this spell (I’ll take your hat, your hair looks swell)
I ought to say “No, no, no sir” (Mind if I move in closer?)
At least I’m gonna say that I tried (What’s the sense in hurtin’ my pride?)

I simply must go (But baby it’s cold outside)
The answer is no (But baby it’s cold outside)
Your welcome has been (How lucky that you dropped in)
So nice and warm (Look out the window at the storm)
My sister will be suspicious (Gosh your lips look delicious)
My brother will be there at the door (Waves upon the tropical shore)
My maiden aunt’s mind is vicious (Gosh your lips are delicious)
But maybe just a cigarette more (Never such a blizzard before)
I’ve gotta get home (But baby you’d freeze out there)
Say lend me a comb (It’s up to your knees out there)
You’ve really been grand (I thrill when you touch my hand)
But don’t you see? (How can you do this thing to me?)
There’s bound to be talk tomorrow (Think of my lifelong sorrow)
At least there will be plenty implied (If you got pneumonia and died)

For further reading: comments and article. 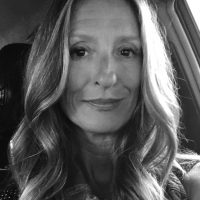 Elizabeth Price Holmes is a graphic designer who believes chance encounters are magic at play. Mother of two remarkable girls who bring a touch of madness to her home, she lo… Read full bio