I had experienced something spiritual during candlelit midnight mass at Christmas in the Presbyterian Church.

There was power in the smell of beeswax candles and frankincense in the church, and I found joy in watching the altar, shaking hands, and taking Holy Communion.

So I looked for more intimate ways to honour the divine—and I came home to paganism.

My first pagan rituals were solitary and potent with empowerment. At university, the group ritual experiences I joined in were even more incredible, moving, and left me charged with awe and wonder. I was lucky to be able to circle with experienced ritualists.

A decade later, I discovered the true essence of ritual—as a janitor, no less. I was able to embrace a structured, systematic routine of tasks as ritual. It’s not hard to do, and the benefits are astronomical.

Mindfulness is key, and it freed up my mind. I could work for three hours without noticing the time passing. I knew what to do, for how long, and in which order. My hands would do the work, and my eyes would check it. I found that I could chant in my head, or meditate, or be preoccupied, and the work would still get done well.

I gained insight into the meaning of ritual. Ritual was repeated action, simply put. Ritual was not about fun, or variety. The politics and magic were extras. Ritual was just going through the motions.

Ritual became a way to create muscle memory. I recalled many all-night dance parties in the city, where I would move to the soundscapes provided by skillful DJs and enter an ecstatic trance state, elevating my mood naturally.

Ritual became a way to transcend. I recalled drumming around the fire at a festival, my hands moving to shifting and mingling rhythms like the flames licking the earth and sky between us all. It allowed me to focus on my breath and the breath-like connections between the musicians that ebbed and flowed as we took turns leading the endless song.

Ritual became a way to process emotions. It became a way to integrate my conscious mind with the subconscious, opening a door to insight, to metaphor, and to making poetry of life. I was reminded of reading novels, my eyes moving across the words, not seeing the language written on the pages but instead, visualizing characters and scenery as the plot unfolded. Totally absorbed and unaware of my surroundings, I would come back to the world a new person, with deeper understanding of emotions and human relationships that I could carry forward.

Ritual became a way to master the mundane. This is the most essential piece, because it is transferable to sacred work. There are micro-rituals within a greater rite. There is a ceremony for purifying the space, one for inviting the powers, and many more. Gaining mastery over the words, gestures, and use of the tools makes sense in a whole new light for me now.

As I grow into my confidence as a ritualist, it occurs to me that the steps involved in any successful ritual are not only done correctly, but done seamlessly.

It is a drama unfolding; ritual theatre is created in a circle. While the acting clergy are performing the rites, they hold it together with their graceful flowing interactions and of course, a bit of humour and ingenuity around anything that goes amiss.

Many skilled ritualists can save the atmosphere of a ritual by improvising, the way a professional actor can ad-lib in a tense scene with a forgotten line. However, improvisation is a learned ability that comes from the deep knowledge and resourcefulness acquired by mastering the basics.

Furthermore, it frees up the leader of the ritual to be able to enjoy the benefits of the work at hand. Not only can they lead, if they have a firm grip on the trappings of the rite, they can also participate in emotional nuances, sense the various interactions, and weave something meaningful out of the whole work.

It is easy to get lost in a flurry of activity while attempting to properly perform the actions in a meaningful sequence. Practicing ceremony often enough, for long enough, makes each rite a drill, building up to a smooth execution of a future ritual where no script, or book, or checklist is required. At that point, acting clergy no longer have to perform for the members or yoke the event like an untamed beast.

I recognized that I am inspired by any leader willing to support others in running the circle as a group, with guidance, so that all are equal participants.

This stepping back to nurture the community is beautiful. It takes someone who can let go of their ego and control, to simply allow a ceremony to unfold as it will, yet coax it forward without letting it descend into total chaos. It can only be done skillfully by someone with experience.

So, for me, the real magic of ritual is the opportunity that opens when the work has become second nature.

Let whatever work you do become ritual, if you dare, and reap the psychological and spiritual freedom. 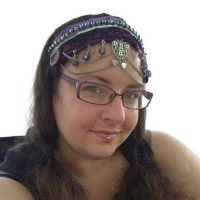 Jacki is an artist, philosopher and poet from Ontario, Canada. She has a Bachelor’s degree from the University of Toronto. She has a background in leadership training a… Read full bio