It was a quiet night.

I was chopping up garlic for a simple pasta dinner, sipping on a cheap wine, and listening to jazz-blues music in the background.

All of a sudden, an excruciatingly loud, “Boom, Pop!” and the fiery fizz of fireworks erupted outside. “Son of a b*tch,” I muttered, “that’s too close.” I shook my head.

It was New Year’s Eve—why wouldn’t they be celebrating? Sigh.

Curious, I walked over to the small open balcony of my studio apartment and saw where they were coming from, and as I suspected, right around the corner of the building. They were being shot over the river.

“Yeh, just makes my stomach tighten and jump every time they go off. Hate fireworks,” I quipped.

Not even the bright colors in the night sky from the fiery explosions are of any joy. The rainbow eruptions were really too close to sounds of war.

I’d left four months ago. It was a high desert, a place where war comes often and death hangs in the air like a vulture ready to consume whatever innocence is left. It is a place where militias form again and again to fight the worst of humanity while becoming the worst themselves.

And as a journalist, it is often my job to cover it, tell their stories, and hope the truth shines through.

But there is a time for everything, ecclesiastical and cliché, I know, but true. It was time for some self-care. What I really felt was, “I need to get the f*ck out of here.” So I did. I wasn’t adding to the conversation anymore; instead I was wallowed in a chaotic mental space I didn’t know how to put into words.

But the sounds and images, they go with you.

This is the truth of the war correspondent’s existence. The war itself becomes a necessary task for which we return to again and again—trying to unravel basic human consciousness. War reporters go to the frontline to see and then turn to deliver the message, so the public will cry out for socio-political change.

But in our own minds, war reporting, being there, is returning to the warped dreams of Salvador Dali, and the memories are like smeared paint across the canvas without purpose.

In November, the film A Private War was released as an ode biopic to the late (and great) reporter, Marie Colvin. Actress Rosamund Pike actually pushed to play the role of Colvin and she will get her award season due. But the what stood out from the film was Colvin’s addiction, her admission, her compulsion to see the primal tribal conflict for herself.

I understand the notion.

And in all this, I recognized the need to stop. Pause. Breathe. Meditate and clear the canvas of my mental space.

Menuha is a good word to describe what I needed. It’s a Hebrew word, a word that means “rest.” It’s a word with a deep attribution to the holiness of stillness. It’s a word I’ve been keeping close to my soul the last few months.

My ocean-soul needed fed. My mountain-woman-roots needed fed. Nature, Mother Earth was calling me to sit still and breathe in oxygen that wasn’t filled with smoke and dust and to listen to the stillness rather than bombs. Then there was yoga, martial arts, aesthetic therapeutic reflections in poetry, doodling in a notebook, and writing pages and pages about my news coverage and what it meant.

Creativity was beginning to shine through. And with exploration of my new surroundings and moments, and coming home to myself, I was learning presence in a way I didn’t understand before. And I was appreciating the beauty I saw on the battle lines in a profound way.

But journalists are terrible at taking care of themselves.

We think futuristically to next the assignment, to the next big thing, and if it bleeds, well, it leads.

We’re in a constant state of chasing, gathering, content judgement, and delivery. Our pay is often feast or famine. Some news organizations offer their staff extra pay for the war zones. Some have medical insurance that covers therapy. But overall, none of us, staff or freelance, have a day off. Even on vacation, we’re still on, so to speak, because if we miss too much in the world, we might fall behind and become irrelevant. Or at least, that’s what the industry wants us to think (it’s not true).

So learning to be present with the moment is a hard lesson. It is one I am still learning, practicing, and making a part of my everyday. By doing so, I become meditative in my seemingly mundane tasks, but that makes my existence sacred rather than addicted.

Thought, it’s important to remember, navigating through the necessary rest and recuperation doesn’t mean the war won’t affect me anymore or that its lessons aren’t transcendent. It’s forever changed me on a molecular level.

Bright pops of color exploding out of canons are not a source of joy, but annoyance. Though, perhaps, the tools I gained in my rest means my reactions will become calmer responses. And I can tell the stories differently or perhaps approach them in a new and more edifying way.

So when the fireworks do pop off so close to my yin apartment space, I can still manage to take a deep breath and stay steady. 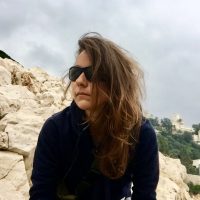 Ash Gallagher is an author, poet, and a professional storyteller who has worked worked with major networks and publications over the last 17 years. She shares an aesthetic per… Read full bio

The Aesthetics of War: How Social Media Changed Everything. What Everyone Talking about Syria should Know.