Taking our Power Back: the One thing standing between Success & Failure.

As the days tick by, and the calendar flips from one year to the next, those hopeful resolutions we made are now in our rearview mirror.

With our motivation slipping with each passing day, many of us are clinging desperately to what we hoped this year would bring.

This will finally be the year that we stick to our resolutions.

Yes, this is the year—we are going to do this!

As the tick, tick, tock of the clock transpires, our eyes drift to our old ways. Doubt starts to creep in, and that unseen master—the one who controls our successes—steps firmly in.

Who is this master that hides in plain sight? Who controls and holds us captive—without our knowledge?

This master is but an illusion that we create, and we give it power by feeding it.

But by learning to take away its source of energy, we can also acknowledge that it is simply an idea we have created—not the master that we think it is.

What is the difference between a highly successful person and someone with the same qualifications who doesn’t achieve success? Only one of them allows this master to control them.

It is that simple.

And now, I have the pleasure of pulling off this master’s disguise and exposing it to you: fear!

Many of us are ruled by fear: fear of failure, fear of success, fear of this, or fear of that.

We are told over and over again that we just have to “do” and we will have success. Well here is the thing, “fear” and “do” are Siamese twins: it is impossible to do when we are full of fear.

Fear keeps us in the “try” mentality. Fear holds us hostage, and the majority of the time we don’t even realize it.

Fear can also be sneaky because it hides. We find ourselves making a billion excuses as to why we can’t do something. And as I’ve been told by a sage man, excuses are the road to all failures. When we make excuses, we are basically allowing fear to stop us. But at the same time, we are also making one of those fears come true—failure.

By far, the fear of success is the trickiest of them all. We want things to move forward in our lives, we hate the struggling and the misery, yet when we are faced with an opportunity to move forward, we make excuse after excuse for why we can’t move toward it.

We wrap ourselves in our discomfort because it’s what we know, and although it feels horrible, it’s also strangely comforting. The unknown land of success has so many fears already built in: What if it does turn out? What does success look like? How do we deal with success—when we are used to doing things this way?

We all have some basic experience with failure. But what about success—what do we do when that happens?

Stability also creates fear, or a lack of stability. We can’t just quit our jobs or walk away from certain responsibilities. But if we stare fear in its ugly face, we will figure out a way to move toward our goals without abandoning stability. We can embrace that fear and figure out how and what to do.

When it comes to making improvements and moving toward how we see our ideal life, we must “do.” But until we address our fear, we will keep “trying” instead of “doing.”

Fear is addressed by walking right up to it, addressing it, owning it, taking away its power, and then walking through it.

Owning it boils down to different things for different people, but the major one is self-worth. If we don’t feel that we deserve the success, or we don’t think we are good enough to achieve it, it won’t happen.

Fear grabs onto those low self-worth feelings and gloriously feeds off of them. The only way to stop fear from having an all-you-can-eat buffet on your self-worth is to retrain your mindset. Here are a few ways to tame those fears:

>> Acknowledge that we have these issues with our value or self-worth. Many people think they don’t have issues with it, but you wouldn’t have these fears if you didn’t. People who walk through fear know they are worth the success.

>> Daily affirmations help to retrain your brain, and they don’t need to be corny or obnoxious—they can simply be you acknowledging your achievements from the day before.

>> Push ourselves daily to do something that makes us afraid, or do the thing that we’ve been making an excuse about—while remembering that excuses are fear in disguise. So, talk to your boss, take credit for your work project, go for that promotion, introduce yourself to someone you like, post a photo of yourself on social media, eat an apple rather than a bag of chips. The list is endless.

>> Baby steps make the biggest dent in our path toward success. And then remember to include those achievements in your next day’s affirmations: “I ate an apple yesterday instead of chips, total win,” or “I’m worthy of feeding my body good food rather than junk.”

>> Recognize that fear is actually a beacon to success. Many times, if there are a few options; if three of those choices are easy and not scary, but one is terrifying and pushes you out of your comfort zone—the chances are that the terrifying one is where the success lies. Move toward it knowing that you are capable of walking through that fear. You will get to the other side and realize your fear was all just an illusion. It wasn’t really scary—we just thought it was.

>> Constantly remind yourself and be aware that when you start making excuses, it is really just fear sneaking in. Remind yourself that fear doesn’t want you to be successful, because then it has no power over you. When you get home and you start making excuses why you don’t want to hop on that treadmill, ask yourself, “am I really tired or am I just making an excuse?” By acknowledging that excuse, you will take the power away from the fear and move through it.

>> But, if you give in to fear once that doesn’t mean you have to throw up your hands and hand your life over to fear on a silver platter. You just shake it off, get back at it the next day or even the next moment. This is part of the process—don’t give up when you stumble, just brush yourself off and go for it the next time.

Fear doesn’t stand a chance when you start taking back your power.

By “doing,” the task or goal will become easier, and although you may feel or recognize the emotion of fear, it will no longer hold you hostage.

You will have developed the skills to defeat it and move toward your success. 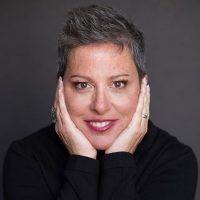 Lisa Anne Rooney is an author, spiritual medium, and intuitive life coach. She started Purple Lotus to help both the living and the dead move forward. She soon realized that c… Read full bio

Nobody Gives a Sh*t: Overcoming the Paralyzing Fear of Rejection. Healthy Striving & Fear of Success. ~ Hanna Bier How to Overcome the Fear of Falling. ~ Sarvasmarana Ma Nithya