The Joyful Art of Running: toward Light, Clarity & our True Selves.

I think of New England summers where all the neighborhood friends would gather and play manhunt at night in a big field, and I think of running away from the other team as quickly as I could. I think of gym class, where I would get so excited for soccer, kickball, and capture the flag.

I was as good as any of the boys, and got so much joy from playing these games—from pushing the limit and going until I was completely out of breath.

As I began my journey through adolescence, like many young women, I began to loathe my body. I noticed new stretch marks on my butt and thighs, and developed breasts that ached as they moved up and down when I ran or jumped. My calves doubled in size and I tried to hide them as much as possible.

Though I played sports, I questioned my body’s capability to perform, hated its sudden transformation, and spoke unkindly to it often. Movement became a punishment, a way to fit the mold of what I thought a woman’s body should be.

In college, I stopped being active altogether. I was tired of punishing my body and tired of dedicating hours to something I despised. At first, this was freeing. But as young women do, I began to feel guilty about not exercising enough, so I forced myself to go to the campus gym a few times a month, where I would mindlessly move on the elliptical for an unhappy 45 minutes. I felt sluggish and tired in my young body—and had long forgotten my joy in movement and running as a child.

Junior year of college, I got the opportunity to spend a semester abroad at a rural field station in Costa Rica. Since I wouldn’t have regular access to the internet or any of the comforts of home, I brought a few books along—one of them being Born to Run by Christopher McDougall, a book that studies and reports on the Tarahumara, an ancient indigenous Mexican tribe of the world’s greatest distance runners.

It’s a truly engaging story that could fascinate anyone, not just those who run. I began reading this book on the plane and could not put it down.

“They remembered that running was mankind’s first fine art, our original act of inspired creation. Way before we were scratching pictures on caves or beating rhythms on hollow trees, we were perfecting the art of combining our breath and mind and muscles into fluid self-propulsion over wild terrain.

That was the real secret of the Tarahumara: they’d never forgotten what it felt like to love running.” ~ Christopher McDougall

I finished the book in a hammock on the porch of our field station. It was fall—the rainy season in Costa Rica—where it would rain for about an hour every afternoon. The clouds had just parted. I went into my room, put on my sneakers, and set out on the rocky dirt road for a run.

My first run in Costa Rica was tough. I didn’t go fast, the air was thick with the rain’s condensation, and the ground was wet. But as I slowly trudged up that hilly dirt road, surrounded by mountains and small, colorful houses, I found the childlike joy I had long forgotten, and was amazed I found it at all, after so many years.

Moving did not have to be punishment. Moving could be joyful.

I ran again the next day, and the next. I sweat buckets. I often needed breaks. I never timed myself or tracked my speed. I learned new routes, and found a side street that led to a steep hill with a breathtaking view.

I started to love running again. I started to crave it. My body changed. But more importantly, how I saw my body changed. I began to appreciate what my body was doing for me—how strong it was and how quickly it could move. My big calves propelled me forward, and my stretch marks were permanent tattoos in remembrance of a strong woman: a runner.

As I returned home to wintry New England, with its grey, slushy streets, I persevered. Running had become part of me. It became a joyful moment of my day. I never saw it as a punishment or obligation again, but rather as a time to celebrate my body’s ability, and some quiet moments to myself.

That was eight years ago now. I am still running.

Running helps me run away from self-imposed limits, from what I do not understand. I often tell people it is my moving meditation. I run toward clarity. I run toward light and comprehension. Toward truth. Toward myself.

I am a runner who knows what it is like to not be a runner. Running is the part of my life that leaps over hurdles and bounds through puddles with grace, that breathes heavy, moves strongly, knows how hard it is to face a hill, and knows how freeing and frightening it is to sprint down. It is dirt and earth and pavement, and occasionally the monotonous thud of treadmill track beneath tired feet at the end of a nine-to-five day.

It takes in the deep icy breaths of winter and exhales vapor you can see. It sweats in the summer. It lets me know the seasons. It allows me to get lost—as it doesn’t know where it is or where it is going. It runs under an overpass and feels the thud of cars overhead. It runs under the same overpass weeks later, only this time with headphones on, hearing no thuds, but instead just music.

My running questions, as I question, “What is this body, this flesh, and what can it do?”

“What changes in me as I go through the day?” 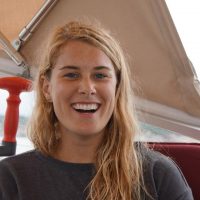