The Revealing Truth of Why We Choose Unavailable People

I want a relationship.

I have to admit, I’ve been telling myself this lie for years. Micro romance after micro romance, that “real love” was nowhere in sight. Instead, I found myself constantly pining for more time, attention or commitment from men who weren’t willing or capable of giving it.

This was my norm – dating men who kept an emotional distance was my comfort zone. This pattern mirrored my childhood dynamic with my parents, and that wounded little girl who learned “I am not enough” would go through life overcompensating by proving and over-giving in order to win love.

The drive to be seen, accepted and loved resulted in me developing many talents — singing, dancing, writing, achieving. I  mastered  various methods of impressing in order to win the validation I was desperately was seeking. I would even bust out my talents on dates — “see me, love me, choose me…” the little girl in me hoped.

Every time it didn’t work, that little girl got more hurt, and the message from childhood kept getting reconfirmed — you are not enough, try harder, be better, do more. The result was a pattern repeating itself over and over again: different people, different situations — same emotions.

Then, in January of 2012, I met the man I would eventually fall head over heals in love with. He was my first real love, and we planned our future together. When that relationship fell apart, I fell apart. The bandage covering up all my childhood trauma was ripped off.  I had to confront those wounds dead on. I felt broken. It took everything I had left in me to piece myself back together, and there were many times I lost complete hope. But eventually I got up. Years later I became friends with my ex, and even built a business around breakups.I’m healed!

But if you look at my romantic outcomes, they were the same as before: unavailable men. Note — you can be in a relationship with someone who is unavailable. It’s not about the label, it’s about the energy. It doesn’t mean the person you are with is ill-intended or not an amazing person, it just means that he/she is not fully in. Whether conscious or subconscious, there’s a wall around their heart which keeps an emotional distance for the bond to get past a certain point. Dating unavailable people enabled me to keep pointing the finger at someone else for why a relationship wasn’t working. It wasn’t me, god no. Until about the umpteenth time and I realized the common denominator was, gulp, ME.

After working with therapist, she revealed to me that while on a conscious level I healed from my breakup, subconsciously I associated love with pain. She pointed out that since my breakup I have only been attracted to men who would only go so far in their level of vulnerability, because that would allow me to also not risk becoming too vulnerable. He’s safe. I’m safe. Nobody’s going to get hurt here!

The flipside is that nobody risks getting past the superficial stage of connection either.

We’ve heard it before — you need to be vulnerable to love. Maybe you think you are being open and vulnerable. But if you’re not connecting in the deep, fulfilling way that your soul secretly aches for, maybe you’ve been doing what I was doing: avoiding true intimacy out of fear, and recreating situations that mirror the emotional experience of childhood.

Or, perhaps you’re choosing partners with an impossible future because the quest distracts you from the truth.

So what now? Armed with this awareness, how does one create change? It doesn’t happen overnight, and this journey of mine has been a work in progress, and probably always will be. I started by learning about  my attachment style and becoming more secure in the way I relate romantically.  I set out to rewire my chemistry compass, and started going on dates with available, healthy people even if I didn’t have instant chemistry with.

Fast forward to today, I’ve learned how real love feels like — it’s calm, safe, present, and enriching. More importantly, I know how love doesn’t feel like —angst ridden,  inconsistent, insecure, confusing and energy depleting. Now, no amount of chemistry, or “what ifs” will convince me to accept the latter.

My norm — my familiar zone of what love feels like, is shifting. Unavailability is no longer a turn on, it’s a turn off.

Unavailability is no longer a turn on, it’s a turn off.

As I become more available, who I am drawn to, and who is drawn to me, is inevitably changing. Who we attract externally is ultimately a reflection of what’s going on internally. And while I probably still have some ways to go, the one thing that I do know is this — when I meet the right partner for me, I won’t need to persuade, chase or impress to earn their love.

Here’s to the journey… both feet in, one step at a time. 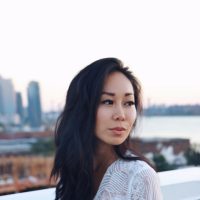 Amy Chan is the Founder of Renew Breakup Bootcamp, a retreat that takes a scientific and spiritual approach to healing the heart. She is also the Editor-in-Chief of JustMyT… Read full bio