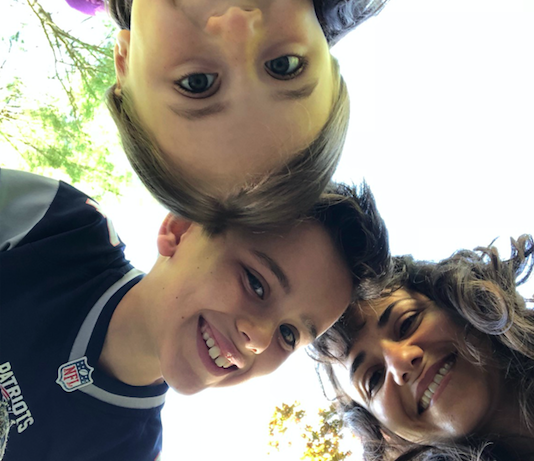 Somehow, I’ve racked up nearly a decade of parenting.

While I’m constantly humbled—and often humiliated— by this whole mom gig, I’ve learned a thing or two in my tenure.

Here are some of the highlights:

Kids show up with their own personalities. Even in utero, I could sense my kids’ temperaments. I didn’t realize it at the time, but my son exhibited his determination in his dramatic rolls across my belly, his feisty kicks just as I tried to settle down for sleep each night.

By contrast, my daughter felt light and slippery.

I know now that I was feeling her gentle spark, her lightheartedness. As parents, we have immense influence on our kids, but they also arrive to us, already wrapped in who they are. Our job is largely to meet them there, while also attempting to help soften their rough edges.

The nature of everything is change. While the essence of our kids might be immutable, the stages they go through are in constant flux. The phases that feel like they’ll last forever—whether it’s the jagged nights of sleep deprivation or the more delightful stages, like watching them develop their first friendships—all come to an end.

For what felt like the longest time, one of my kids would flail around on the ground if I hugged anybody else. Now that same child could care less—just as long as I don’t try to hug him when the school bus pulls up in the morning. Let go is the heartbeat of parenting—my kids constantly remind me not to hold too tightly to any one phase.

I’m so not the parent I thought I’d be. The gap between the parent I thought I’d be and the one I actually am resembles the Grand Canyon. I imagined being a super crunchy mom who’d encourage her kids to follow in her vegetarian footsteps and spurn screen time in favor of craft time. Instead, I cook bacon on the daily and generously serve portions of Netflix and Roblox to my children, and only reluctantly participate in “crafternoons.”

The truth is, parenting takes up so much of me that I’m just too tired to be the mom I thought I’d be. I’m not the idealized version of myself I imagined, and most days, I’ve come to a rugged peace with that.

Time flies when you’re having kids. Time flies anyway, but there’s something about raising children that makes it zoom. Maybe it’s because as parents, we’re so focused on our kids’ milestones that one day we look up and wonder where our 30s, 40s, or 50s vanished to.

Guilt is inevitable—suffering is optional. If I could have a parenting do-over, I’d listen more carefully to my own needs and suffer less over tending to them. When my son was a toddler, we sent him to preschool for two days a week. Oh, the guilt! The drama! What a bad mother I must’ve been for needing a break from him! If I could start over again knowing what I know now—I’d cut the guilt and enjoy the sweet moments of autonomy. And maybe add a third day of preschool.

We’re mostly just wingin’ it. As a child, I viewed my parents as decisive adults. I had no idea of the myriad of doubts they likely lugged, the indecision and insecurities that probably haunted them like they haunt me. While I’ve learned a few things about parenting my particular children, I’m mostly just making it up as I go along. Parenting is like a ridiculously long multiple-choice test where you don’t receive your grade for a few decades. And at least half the time, I’m just filling out the bubbles willy-nilly.

And, the huge decisions we’re faced with aren’t actually that huge. Will introducing a pacifier kill our breastfeeding relationship? If I let my kid sleep in his swing, will he only be able to sleep with movement? If we sleep train, will our child be emotionally scarred? All these worries, in the moment I experienced them, felt monumental—like each had the power to alter my child’s life forever.

Thanks to hindsight, I know that most of the choices we face aren’t fate-changing. As parents, we’re forced to make dozens of small and large decisions each day in this eternal multiple-choice test, and there’s not usually a right or wrong answer.

Our children literally change us. Long after our children are born, their fetal cells roam our bodies, forever marking and morphing us. Before having kids, I loathed football and was a confirmed cat person. Thanks to my passionate son, I’ve come to love the ritual of watching Sunday football, and we just adopted our first dog. Our children lead us down paths we’d never have ventured without them. They stretch us and they open doors we didn’t realize were closed.

Being perfect isn’t our job. As parents, we inevitably screw up. Sleep deprived, I’ve made the outrageously dangerous mistake of forgetting to fasten my baby into her car seat. I’ve jerked the car over to the side of the road to shriek, “What is wrong with you people?” after enduring seemingly endless back seat bickering. I’ve threatened and bribed and hollered. And while I’m not proud of these occurrences, they don’t make me a bad parent—they just make me human. I’ve learned to apologize to my kids when it’s warranted, and then to grant myself the same grace they always grant me—forgiveness.

It gets easier. Maybe it’s because postpartum depression made early parenting like an endless, humid triathlon, or because we’re currently in the so-called sweet spot of parenting, but for me, parenting has gotten easier with time.

I don’t miss the baby or toddler stages—partly because I love getting acquainted with the older children my kids are becoming, and partly because finally, after 10 years, I feel acclimated to being a parent. Motherhood was a huge shock to my system—to suddenly love someone so widely, to need to protect them so fiercely, and to be tethered so relentlessly—that it felt like as much a metamorphosis as dying or being born.

While the loving and worrying never, ever stop, the tethering eases. Like our children, we’re resilient.

This is Parenting. 3 Mindful Parenting Tips that can help us Connect with our Children.