Getting Aroused, Public Shame & other Struggles of being that One Dude in Yoga Class.

I loved the early days of my yoga practice.

There was nothing to fear.

The yoga instructor was consistent and taught each class with no surprises. There was always plenty of space around me, and the temperature in the room was consistently to my liking.

Regrettably, my first instructor was on an iPad screen, and the yoga studio was my living room.

In the interest of full disclosure, like many other 30-something men, I was a closeted yogi.

It doesn’t make much sense that a guy with a newfound passion for something healthy and of great benefit wants to hide it. I couldn’t bury it forever, though.

It became apparent after a month or two of doing yoga in the living room that the desire to do it wouldn’t last long. There’s a certain yearning and need to see what a live class can offer. Benefits such as human interaction, corrections on posture and alignment, and variety cannot be found in one’s living room. Of course, that may not be the case if one has the benefit of a private teacher. But I’ve yet to meet anyone who can afford that routinely.

Eventually, I overcame my fears about going to a yoga studio, and I want to share some tips on how to do it:

1. You’re not a pervert for being there.
Some of us guys are tempted to look. There’s usually at least one person in the studio who catches our attention—maybe it’s the teacher or another student. It’s easy for us to feel some fear and shame about the situation.

It’s usually a simple fix. Put the mat in front of the class to minimize the chance of looking anywhere but up front. The room may not allow for that, so take the best option to remain focused on the teacher.

We also can’t imagine what would happen if we somehow became aroused. It’s a big fear. Many of us won’t set foot in a spa or Ayurveda clinic for a massage treatment because of it.

The truth is, arousal doesn’t happen in yoga when we are putting our attention on our breath and asanas (yoga poses). Yet, the fear and shame can still be there and prevent us from going.

Set an intention to focus on the breath or something else aside from who’s in the room. It works.

2. Just show up.
Commit to going at least once to try it out. When you get there, there’s too much invested to just walk out of the studio. You’ve already been seen, so it’s too late to turn back.

The conditioning runs deep, I know. The walk from my truck to the studio door and then back again is still a challenge for me. Will I be seen with this yoga mat? What will other people think?

It got a little better a few years ago when my wife gave me a men’s yoga mat bag for Christmas. Now, the mat and yoga accessories are kept in what looks like a slender gym bag. It’s genius.

3. Don’t turn this into a competition.
There is no winning or losing in yoga. Remembering this will reinforce the fact that there’s nothing to fear.

Rejoice if you join a class with at least one other male in the room. Don’t treat this like the gym or a sports match. We aren’t there to compete; we are there to practice and relax into our true nature. Getting into a competitive state of mind during practice only serves to heighten the risk of injuring ourselves.

Yoga is not the battle—getting there is. Once you’ve shown up, the battle has been won for that day.

4. The benefits outweigh the drawbacks.
If we remember to stay in tune with our bodies and not turn this into a competition, we can only benefit from practicing yoga.

A lot of men deal with chronic issues such as back pain. According to this article on Elephant Journal, yoga can help lower back pain.

Yoga does good for our bodies, mind, and spirit. Why else would it be passed down for thousands of years?

5. Go prepared.
Wear loose clothing. Reapply deodorant if needed. And for the love of all yogis everywhere, don’t eat processed junk food before you head to the studio.

I cursed myself every time I downed a few tacos before leaving the house (I usually go on Taco Tuesdays). There was a symphony of tubas in my digestive system, and my butt was tightly clenched for fear of clearing the room. (This article on Elephant Journal teaches why we want to eat after yoga, never before.)

As for the loose clothing, remember that talk about not getting aroused? This is our backup plan, plus it feels so much better when nothing is tight. This is where men have it made in yoga—we wear what’s comfortable.

Moving beyond the myths and fear.

What’s the stigma keeping men from doing yoga in public or anywhere else? Maybe it’s the myths ruling the minds of men. Myths such as men’s bodies aren’t flexible enough, or that yoga isn’t a workout, or that it’s only for new agey men.

We must learn to discount these myths and push past whatever conditioning led us to fear such a beneficial practice.

Men are by far a minority in the yoga studio. The only exception I found to this rule is in the Bikram, or hot yoga, studio. The studio owner answered my inquiry one day after class. She said that more men tend to show up in her studio because of the intense workout this style of yoga provides.

So, if you’re a male yogi looking for a studio where men may not be a minority, hot yoga might be a good place to start. Hopefully it’s accessible to you. (Here are 20 tips for your first hot yoga or Bikram yoga class.)

Getting out of the living room and into the yoga studio has challenges. Aside from the fact that it’s cheaper to have a home practice, we have so many other distractions pulling at us.

As stated earlier, yoga is not the battle—getting there is. We must commit and show up. Yet, we’ll show compassion for ourselves if a class is missed.

For all the yoginis out there, the next time a new guy shows up in the studio, please great him with a warm smile. It took him a lot to get through that parking lot and into the studio. Chances are, he’s not there looking for a date or a sweaty workout.

He just wants to be the best possible version of himself. 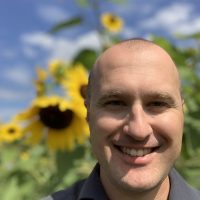 Joe Cyr faithfully follows his passion as a poet and blogger. Most of his words revolve around self-discovery and authenticity. Joe is a licensed massage therapist, hypnothe… Read full bio