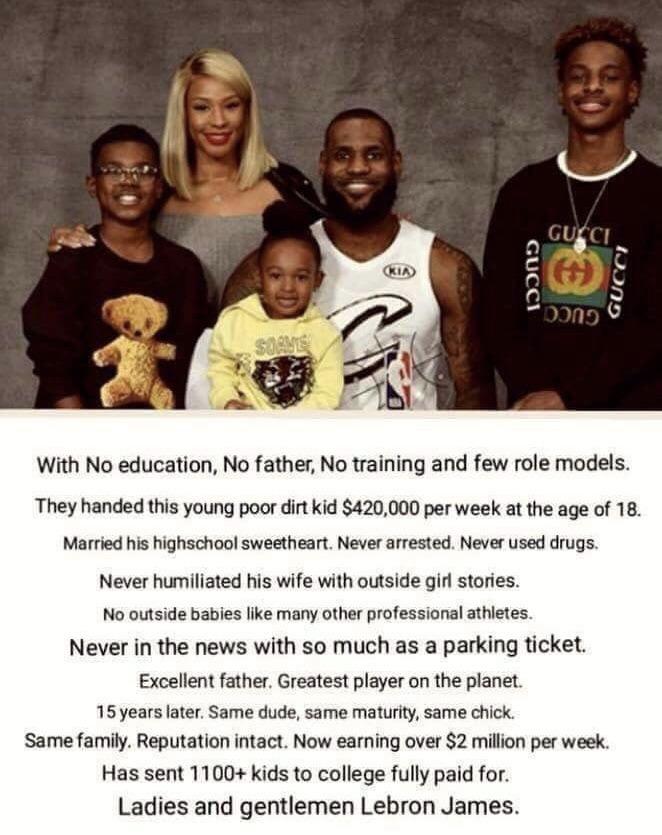 Team affiliations and typos aside (see image), I look up to this gent. We need more positive examples.

As a businessperson, I love how he makes everyone better around him.

Triple-doubles mean—well-rounded, sure, but they also mean he’s passing, passing out of the double-team, encouraging his teammates to score. When they start scoring, they pass back to him and he dominates. It’s impossible to defend when things are clicking, and they’re almost always clicking.

He’s generous, funding childrens’ education. He speaks up in politics, using his platform for equality, without letting himself get distracted longterm.

His surrogate father, on the other hand, spent three years in jail for cocaine trafficking and other crimes.

So, it is fair to say that LeBron knows the importance of a father in the life of a kid. He is an amazing father himself and he’s setting a great example for his kids. He’s a great role model, as an athlete and as a human being.” ~ redditor “he’s always been smart as f*%k. turned $10M down from adidas his senior year in HS to go for a bigger deal with nike that didn’t exist yet. of course it worked out. he’s also put a lot of his friends in positions to succeed and they have, rich paul and maverick carter are well respected at what they do. these guys are usually told to move on from friends because they’ll drag you down, but he even bucked that trend.”

Let’s take a look at all of LeBron’s philanthropy:

Boys and Girls Club of America

Lebron James designated $2.5 million of the proceeds from ESPN’s “The Decision” special to Boys and Girls Clubs of America. While in Miami, Lebron was very involved in Miami’s club. The club helps give all children equal opportunities and provides after school mentoring and activities. Lebron and his wife designed and donated furniture to the Miami club through Home Court Furniture. They replaced the roof and fixed up the children’s work space. They donated 1000 new computers to 59 Boys and Girls Clubs throughout America.

Lebron’s Foundation began the After-School All-Stars for the children of his hometown, Akron. The Foundation has raised money and donated to the charity for many years. It began as a bike-a-thon, “Wheels For Education” to raise money for children in Akron to have help with education and a place to go after school. It developed into a program to help “at risk” children of Akron in a variety of ways. The program provides mentoring and help with education as well as extracurricular activities. The goal is to keep kids in school and encourage them to graduate. It begins in the third grade when students need to reach state standards to move up to the fourth grade.

The program provides reading and math help for children who need the mentoring and discourages them from dropping out of school before graduating. Overall, Lebron’s Foundation has raised over $40 million for the program. Recently, Lebon teamed with the University of Akron to provide scholarships. The children must participate in the program and parents are encouraged to participate. Lebron is very involved with the program. When he cannot be there, he connects with the children via social media. The program currently sponsors over 800 children. The first graduating class will be in 2021. The scholarship covers $9500 annual college tuition for each student. Lebron hopes to extend the program throughout the state of Ohio.

ONEXONE also focuses on the support of children. Their mission includes taking care of children by helping them with the 5 pillars: hunger, health, education, water and play. Like After-School All-Stars, the organization uses donations to provide help to those children who need it and encourages them by giving them hope and a sense of pride. The program provides healthy breakfasts in schools, water, medical help, educational help and after school activities. As with most of Lebron’s charitable causes, he especially gives back to the children. His Foundation is a major donator to ONEXONE. Clearly, Lebron James never forgot the humble beginnings he came from. Without the help and encouragement of mentors like his mother and the Waller family, Lebron may not have had the opportunity to achieve the success he has. His talent as a basketball player and his humanitarian spirit have inspired Lebron to give back. He never let his ego get in the way of giving back to those who inspired him and to the children.

The I Promise School

Most recently James is made headlines because he built his brand new I Promise School for at-risk youth in his home town of Akron, Ohio. The news isn’t surprising, as James has proved how much he values education. This the same guy who paid for 1,000 kids to attend college and started “Wheels for Education,” a program that provides school supplies, access to computers and even bicycles to low-income kids.

“We want every kid that walks through this school to be inspired, to come … away with something, something where they can give back,” James said in a CNN interview with Don Lemon. “For kids, in general, all they want to know is that someone cares. And when they walk through that door, I hope they know that someone cares.”

The Children’s Defense Fund started in 1973. Its purpose is to be a voice for children’s rights and make sure that all children are treated equally and fairly. Lebron James’ Foundation is a major contributor to the non profit organization. As with the After-School All-Stars, the program focuses on “at risk” children who come from poor backgrounds and helps these children complete their education.

Via Reddit. “I really don’t understand how some people don’t like him. He’s what every athlete or celebrity should aspire to be.”

More from Reddit: “I grew up idolizing MJ but I have to give credit to LJ. MJ has been known in multiple encounters (ahem Chamillionaire) to be a complete asshole. Also known as a philanderer. Allegations of gambling on a Pete Rose-Type level. The market he created with Jordan’s could not have been healthy for the African American community. LeBron has literally done the opposite in every one of these respects. I mean Christ the biggest grievance I have with him is when he created that cringey The Decision when going to Miami…and he gave all the proceeds to charity!! Dude is an absolute legend and I’m honestly in awe he has never had one major scandal. They say athletes shouldn’t be role models but this guy certainly is.”

“Totally agree with you but what has always gotten lost is that ‘The Decision’ was the name of the ESPN special where Lebron announced his $4million donation to the boys and girls club and his next team. So everything related to The Decision, including that term, came from ESPN. It always gets attributed to Lebron but ESPN never gets any blame for coming up with the idea and airing a special for it.”