Someone’s Lucy Froze to Death: how to Protect our Pets when the Weather becomes Dangerous.

I just stumbled across a horrific picture.

A dog lay dead, curled up, literally frozen to the ground it called home. A small, igloo-shaped doghouse was lifted and placed on the ground to reveal the scene: another dog frozen to death during a record deep freeze that hit the Midwest.

What? This isn’t real. This has to be clickbait, I think, eyes darting quickly from one line to the next, before I realize this unfortunately isn’t clickbait at all. This is the sad reality for hundreds of dogs every year, neglected by their owners and left out to die during frigid winters—unnecessary suffering and death due to someone’s negligence.

Authorities will pursue charges against the owners. It’s something, but it won’t bring the dog back. A life could have been saved by anyone with a quick phone call, not to mention what the dog’s family could have done by simply not leaving it outside to die.

I am irate. How could anyone be this careless?

Warnings are sent out en masse each year by animal rights activists, rescue operations, law enforcement, volunteers, and ordinary individuals to bring your pets inside when temperatures drop. They can’t and won’t survive outside.

They must have missed all of those warnings, right? No. A conscious decision was made to leave that dog outside during a deep freeze.

A simple doghouse will be enough to fight off subzero temperatures, and they will be fine—it’s just a dog after all, right?

Lucy, my five-year-old rescue pup, is snoring on the couch across the room with her Rudolph toy tucked under her chin. Immediately, I look to her with a heavy heart.

She has brought much joy to my life for the past four years. I adopted her the day before her “due out” date, also known as the day a dog is to be euthanized to make room for another stray or owner surrender at the shelter.

It could have been her in that picture. Someone’s Lucy froze to death outside, alone in a tiny doghouse. I get up and go sit next to her, petting her brindle head. I tell her I love her and ask her if she wants a treat (spoiler alert: she always wants treats). Her smile, wagging tail, and head cocked to the side, wondering when she’s going to get that treat, make me laugh. Lucy devours her treat before I’m done laughing. I needed that laugh.

This is an ordinary occurrence for Lucy and I. She is family. Everyone doesn’t view their pets that way, but when looking out the window at the frozen earth, shuddering at the thought of venturing outside, doesn’t that dog out there cross your mind? It never stood a chance. That dog died curled up in a ball, involuntarily shivering, alone, hoping for some respite from the bitter cold.

Rescues and shelters across the country are at capacity and still taking in animals during this “polar vortex.” Despite limited resources and space, they continue to urge people to report animals being left out during the cold so they can be saved. They also desperately need volunteers to foster these animals so they can save more. I live in Florida, so I don’t see dogs left out in freezing conditions often—unfortunately, I see animals left in hot cars instead.

In Florida the heat gets out of hand quickly. Days removed from the deep freeze up North, and we’re sitting at 81 degrees Fahrenheit and sunny in early February. Don’t hate us—it will be triple digits and unbearable soon, and we will be longing for temps in the 80s.

Temperatures in a car rapidly climb out of control. If you don’t believe me, give it a try for yourself the next time it’s a nice day out. Close the windows, shut the car off, and just sit there taking in the warmth. Temperatures of just 70 degrees can quickly yield temps in a closed car over 100 degrees.

PETA ran an ad in the United States to raise awareness for those who might leave their dog in a car on a warm day. They took a professional athlete at the top of his sport and simply closed all the windows and doors, asking him to comment on how quickly the temperatures rose on camera. You quickly see the sweat pouring off him as he comments the rapid heat wave consuming him and how a dog wouldn’t stand a chance.

Animals can sustain brain damage or even die of heat stroke in as little as 15 minutes. In this exercise, the world-class athlete lasted only a few minutes before opening the door and seeking shade.

Get educated on the local laws of your area. In some areas, it is legal to remove animals from cars, as several videos of people breaking windows to rescue animals have gone viral. Do your research before attempting any such act!

The Humane Society, PETA, and other animal rights organizations recommend several steps if you see a pet left in a hot car:

> Take down a car’s make, model, and license plate.
>> If the owner can’t be found, call the nonemergency number for your local police or animal control and remain where you are, keeping an eye on the animal until help arrives.
>> Take note of all the details (e.g. date, time, exact location, pictures, and videos are strongly encouraged).

I urge you, if you see an animal out in harsh conditions (hot or cold), report it. Make the call.

You could save a life, you could save a Lucy, and I hope you do. She’s alive because someone made a call that a dog was wandering the streets on a hot day. I kind of owe my life to that person for making a quick call, but that’s a story for another day.

Update: she’s snoring again and I need another laugh. Time to give her some more love and another treat. 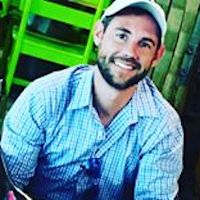 Ryan McCafferty is a project manager from Florida. He’s enjoying walking the path of mindfulness and self-awareness. He has a spoiled, five-year-old rescue pup named Luc… Read full bio