This last year of my life has had some, let’s just call them memorable moments.

These moments not only tested my resilience and spirit, but also gave me an opportunity to expand my vocabulary with words like “nephrectomy!” “bladder resection!” and “immunotherapy!”

I endured life events that, in anyone’s book, would separate the wimps from the badasses.

Turns out, I am a badass!

I charged out of Battlestar Cancerlactica and, after a few years of being a “sick person,” I finally got to the point where I felt like a “well person.” Ta-da! The world was suddenly my oyster. All I wanted to do was live a “normal” life. I wanted to play, to be out in the world again. Even better, I wanted to date!

Admittedly, it had been a while since I spent some time with the opposite sex. I got divorced, I got sick, then I went into battle. None of those things would ever look appealing on a Match.com profile, so I just forged ahead through illness solo. And, anyway, where does one meet a suitable suitor who would be willing to go the distance with me, especially if the distance could potentially be a very short ride?

I know there are no guarantees any of us will be around tomorrow, but illness certainly put a whole new spin on, “Hey, do you want to go out on Saturday night?” As my Grandmother would say, “If the good Lord doesn’t draft me!”

But I busted through that barricade. I am a survivor! I am ready for action. Or, well, how about just a decaf coffee?

One late spring day, I made a pact with myself as I approached a train station in New York City on 23rd street. In the 15-minute ride ahead of me, I would challenge myself to connect with someone, anyone, a real, live, actual, breathing person.

A friend once said, “You meet your playmates in the playground.”

So right then and there, I was going to turn that air-conditioned, Jersey-bound train into my very own Coney Island.

I dared myself to have a conversation with someone—it didn’t have to be a potential boyfriend, it was just practice—but my instructions to myself were to make a connection before the final stop in Hoboken, New Jersey, which gave me approximately 15 minutes.

This became my “Path Train Experiment.” Yes, it is called the path train. Choose yours…

The doors opened at 23rd street and, as I got on the packed train, I could see that the only available seat was next to a man who had his head in a book. An actual book, not a phone. This guy was turning real paper pages, making him a sight for sore eyes and the obvious choice for my experiment.

I sat and looked around at a sea of travelers with their fingers and eyes on their phones, playing games, writing emails, solitary riders with their gazes fixed completely on their devices. I don’t think anyone would have peeled their eyes off their phones if I’d screamed my head off and it went rolling down the aisle.

Mr. Bookworm had no idea what was about to hit him. Neither did I, come to think of it.

I spent a good five minutes of my precious 15-minute ride trying to think of what to say to him. I glanced over to his book, trying to read the title, something I could have done maybe 10 years ago with better eyesight, but, darn, the print was too small.

Out of the corner of my eye, I could see the top of his head. Hair! This guy had a full head of hair, like he was blessed with the stuff! What man (in his late 50s, I guessed) had that much hair?! I looked across to some phone nerds and saw two bald guys sitting opposite us.

And then I spoke:

“You, sir, have an impossibly great head of hair, and those guys over there? They hate you.”

Mr. Bookworm looked up, seeing me for the first time, and for a second I wasn’t sure if he’d be interested in engaging or if he’d wonder what I was smoking.

And, just like that, we started talking. And talking. And much to my surprise, the “experiment” got more interesting, so much so that it warranted a phone number exchange and a second conversation a few days later. Data input for my “Path Train Experiment” became plentiful and at some point, even included truth-telling.

And, guess what? The world didn’t end. In fact, it got just a bit lovelier.

Life is about connecting, feeling a part of something, whether you have an illness, a sprained ankle, or a broken spirit.

It’s so easy to disappear here on planet Earth—into a phone, into a book, even. Our worlds are so fascinating in our devices that we’ve forgotten how interesting they can be outside of them.

Daring to look up and actually take someone else in takes bravery, craziness, gumption even, but the result could be a great conversation, a new friend, and who knows, maybe something more.

I have continued my challenge. I make more eye contact now. I say “hello,” and every now and then, I get a “hello” back, generally from a perplexed person, but, hey, it’s a start!

We are all in this together. Whether it’s a short train ride or a challenging jaunt through illness, connecting makes the journey, any journey, that much sweeter. 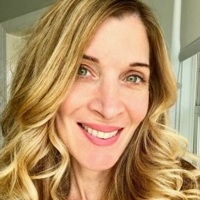 Catherine Porter is a mother/singer/songwriter/dreamer/cancer-kicker living in New Jersey. She has traveled the world as a performer, singing with diverse and notable artists … Read full bio