“Narcissist” has been the buzzword for the past couple of years (and it’s no wonder why).

But is it always as obvious as the people who are obnoxiously outspoken despite their ignorance, who demand attention and excessive admiration, and have little to no empathy for others? No. As a matter of fact, there is a spectrum in narcissism ranging from having a trait or two that tend to show themselves once in a while (normal) to full-blown grandiosity and superiority.

Narcissistic Personality Disorder (NPD) can present itself in different ways while still meeting all of the diagnostic criteria. But since we are not all clinicians (and even those of us who are) we can often miss the signs.

If you are an adult who is now struggling with things such as depression, anxiety, low self-esteem, addiction, and/or abusive relationships, you may have grown up in a household with a narcissistic parent.

Here are the four signs (based on your own truth):

1. The Façade Never Matched the Feeling

As a child, you often went to friends’ houses to play. You sensed that staying out of the way was best. However, on the occasion that friends came over, your house was a storybook. Friends talked about how cool this parent was. Your friends got the impression that your house was perfect. When friends were over, things became eerily calm and light. This parent was more attentive and interested. Perhaps he/she made conversation with your friends, asked them about their family, or how school was going.

But when the door closed, the energy changed. On the outside, your house remained the storybook image, but the inside became dark. This is when the fighting, the criticism, and the demands began, usually about something completely insignificant, but always leading back to this parent’s overwhelming need for control. There was a looming sense of shame that covered you like a thick, wool blanket—but you couldn’t explain why. You didn’t have the words to describe the sense of loneliness, confusion, hurt, or fear you felt around this parent. Therefore, you told no one.

2. Your Intuition (or Natural Instinct) has been Dampened

Children have a remarkable intuition. They can sense when things are “off” or pick up on negative energy when they enter a room. They speak their truth without social conditioning. As a child (and perhaps still now) you were a trigger to this parent. Your sensitivity threatened his/her sense of control. Questions asked were seen as direct insults to his/her intelligence and there were repercussions for not taking this parent’s word as gospel.

Doubt or disagreement was not tolerated and would escalate to physical, emotional and/or psychological abuse quickly. You were taught not to trust yourself because your body and mind were always giving you signals that this parent would override and demand to be untrue. You learned that to think otherwise, meant you did not belong and did not deserve love.

3. There was Consistent Inconsistency

Interpretation kept you wondering. What is the truth? You thought you heard this person say something, only to hear them explain the opposite, sometimes in the same sentence. Your mind was always in a state of confusion and you began to think you were going crazy. When it came to relationships, this parent did not have many and the ones they had were instilled and maintained by fear.

This parent had a history of discord with different family members, always leaving him/her as the “victim” and burning the bridges left to connect you to anyone else. You never heard the other side to any stories. Pointing out an inconsistency in communication was met with flames of retaliation. There was a mask under a mask and you never knew which one you would see. This parent’s reality was his/her only reality and one you were forced to live within.

4. You Believe your Feelings are Too Big for Others to Handle

Your entire childhood you were consistently told that you were too emotional and over reactive. Your emotions were silly and not valid. You didn’t have a sense of what homeostasis was because you never experienced it. You were taught that your feelings did not compare to that of this parent’s. His/her feelings were always more important and should be treated as such. It was your job to maintain and groom them.

As your personal relationships became more complex, you began to isolate or get caught in relationships in which you were are always holding someone else’s feelings at a higher level than your own. Your feelings began to manifest into depression, anxiety, or numbness because there was no safe way to release them.

If these words speak your truth, it is very likely this parent could be narcissistic.

It is not your job to change this parent. As an adult, it is your job to change your negative self-thoughts and create a happier and healthier life for you and your own children. Seek counseling with someone who is sensitive to abusive relationships and has a good understanding of personality disorders.

Reconnect to your intuition and take back your power. It’s still in you. 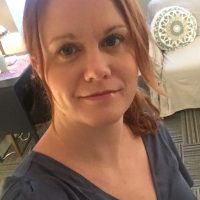 Cara is a Licensed  Professional Counselor and Art Therapist in the State of Colorado. She has a private practice and loves to work with teens and adults individually to help… Read full bio

When the Narcissist is the Parent. Why Children of Narcissists are more Intuitive & 3 ways to Help their Healing.
See relevant Elephant Video

How to deal with Narcissists—from a Buddhist Point of View.