How I Used EMDR to Heal My Trauma 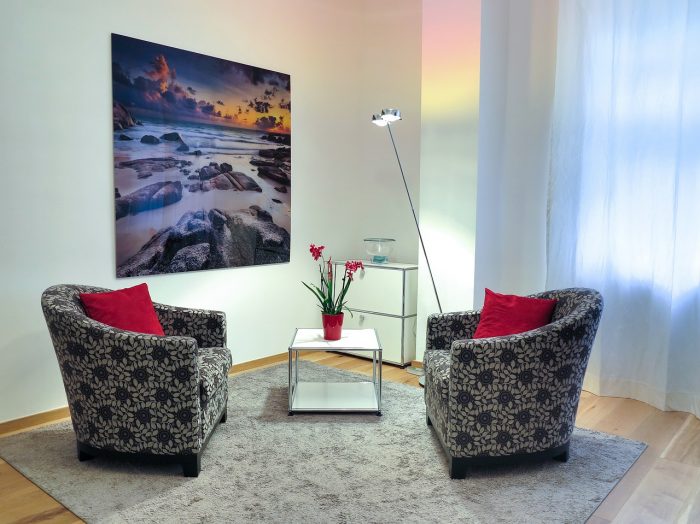 The first time I ever did EMDR, I went straight back to infancy. Like … in my crib.

EMDR stands for Eye Movement Desensitization and Reprocessing therapy and it works by using bilateral stimulation to help the brain reprocess old traumas and memories. Perhaps that stimulation happens with flashing lights, alternating vibrations, or clicks heard through right and left headphones.

Proven in more than 20 randomized controlled studies, this therapy for PTSD has been recommended for several years by the American Psychiatric Association, the Veteran’s Administration and the Department of Defense.* But these days the definition of ‘trauma’ has expanded to go way beyond the theater of war.

Turns out a lot of the rest of us are dealing with various forms of PTSD as well, just from the slings and arrows of everyday life. In my case, my trauma first showed up as an unexplainable fear of my girlfriend. I loved this woman – but when she walked in the room, I was often filled with a strange, triggered fear.

EMRD was suggested as a way to reprocess my trauma from the past. And given that my mother was an abusive, suicidal addict, that seemed likely to be the source.

The EMDR process is simple. In my therapist’s case, she placed a grey plastic pod in each of my hands. Then she sat down across from me with a small control box that was wired into the pods.

For a moment, we talked about safe allies I could imagine as I went through this process – in my case, my older sister Lisa, and a beloved German Shepherd from my childhood. We got clear on exactly what emotional experience needed to be processed. Then she turned on her little magic box.

The pods in my hands began to gently vibrate, first right then left, as I recounted my memory of the last time I’d been scared of my girlfriend. It wasn’t anything she’d said or done – it was just a feeling. Which I promptly felt.

So I went with it.

Soon I landed at the source of my discomfort – a moment when I was only about four months old and I became tangled in a crocheted blanket while napping in my crib. Suddenly the memory was vivid as a wall of anxiety hit me hard.

The blanket covered my face and my mouth, and I pulled at it, frantically trying to release it. In an instant the memory came back – cold, hard and real. I could still remember my frenzied writhing, as I tried to get away from the blanket. I began breathing hard, fearing I would suffocate, as the memory raced through my brain.

I began screaming at the top of my lungs, just like a baby would. Only this time, I was screaming that I was going to die – and I could feel the certainty of the belief. The pulsing of the pods stayed with me all the while, becoming more and more intense as we built to the source of the trauma.

As it crested, the therapist asked me to find my ally. In an instant, in came my sister, who I could see leaning over my crib. She gently removed the blanket from my face. Then she picked up my little baby self, and comforted me in her arms as my panic gradually subsided. I settled after a few moments, while the pulsing in my hands slowly continued.

“How’s your anxiety now?” the therapist asked after a few moments.

It was significantly reduced. What followed were images in which I imagined my partner walking in, and my delight – not fear – around her arrival. Not long after that, the session ended.

My body was far more relaxed now than when I’d arrived, and my breathing had returned to normal. In fact, I felt a bit exhausted, yet at the same time exhilarated and lit with a strangely unfamiliar joy and relief. The world seemed good again.

And yes, the next time my girlfriend walked into a room I was occupying, I was no longer hit with a stab of terror. However, even though original fear was now gone, other fears had now popped up to take their place. Clearly, they, too, were asking to be healed.

I ignored them… and so here we are today. Turns out your baggage doesn’t magically evaporate over time.  But then I might have known one EMDR session – as potent as it may have been – wouldn’t magically cure all my ills. Which is why therapists recommend multiple EMDR treatments to truly heal your trauma.

Eight years after my first session, I returned to EMDR as a way to heal some on-going fears that kept causing trouble in my life. This time, I booked multiple sessions. And this time, I’ve been rewarded with subtle but profound changes that permeate my entire being.

Specifically, I wanted to heal a lifelong fear of being known by the public, especially around my most vulnerable work, despite a long career as a writer. It was an annoying, persistent stress I couldn’t shake.

Enter EMDR. This time my helpful ally was none less than the great Mexican art icon, Frida Kahlo. And Frida had a lot to say. In one session, I went back to a memory from my childhood, when my ninth grade teacher Miss Parsley got me alone, closed the door, and asked why I was suddenly failing my classes. It made no sense, given that I was usually a straight A student.

In an instant, I was back in the memory, and the claustrophobic feeling of being closed in on. Meanwhile, real terror passed through me as the pods buzzed on and off in my hands.

I couldn’t tell Miss Parsley that my alcoholic mother had just attempted suicide. We’d been sworn not to tell anyone. Nor could I share how often I had to sit by mom’s bedside, doling out false words of encouragement while she got drunk on vodka and berated me.  Nor could I share the fact that I was gay, something that would never be tolerated in my parents’ homophobic home.

I was terrified to share anything that was bothering me, or to ask for help. In fact, I didn’t believe I deserved it.

Now, Frida appeared as the memory peaked. “Ay, Chica!” she began, taking my arm. Gently Frida led me away from the scene and suggested I come live with her and Diego at the Casa Azul. “We will help you. We will take care of you, and teach you how to be a true artist – and to be yourself,” she suggested. Here was the safe space and mentorship I’d been needing.

And given that she, herself, was bi, even my need to be a lesbian was accepted. I suddenly relaxed as I listened to Frida’s encouraging words in my vision. On buzzed the pods as my body relaxed palpably. I breathed a new sense of hope as this new reality was now seared into my brain.

In the weeks that have followed, and my subsequent EMDR  sessions, I notice a glorious thing. Where I once held back and worried incessantly about public exposure and submitting my work,  the voice of doubt is suddenly gone. Instead, I feel liberated to show up and share.

Furthermore, I believe what I have to share is genuinely useful – and needed. I can even ask for help now and comfortably, gratefully receive it.

Not only that, I even feel far more forgiving and understanding about my poor mother and the challenges she faced in her lifetime. Indeed, I have come to realize she was a powerful teacher in learning to overcome my own difficulties. Yet, to realize this I needed the right tools.

It simply took all of this time to screw up my courage, call in the EMDR and finally get the job done.