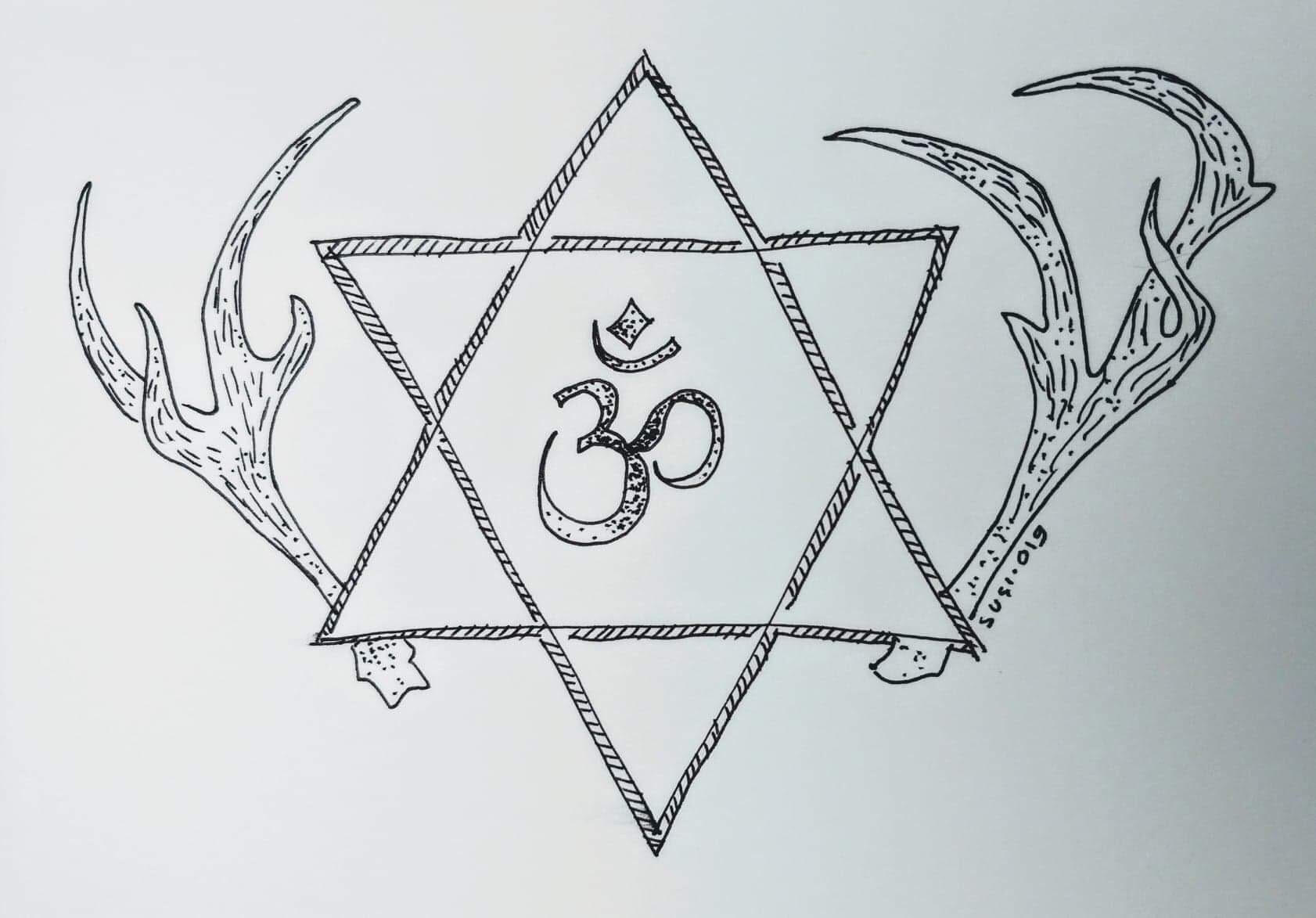 Each month I hold a moon circle in my home for my female friends.

As the moon and our menstrual cycles renew, we take part in meditative rituals as well as drink wine, smoke weed, and laugh together. This can be seen as an explicitly Wiccan experience or can be considered as “Rosh Chodesh” which is the new moon each month in the Jewish Calendar.

I was raised by baby boomer parents (who by proxy have cognitive dissonance around their Jewish practice) who simultaneously blindly abide and are nourished by honoring the traditions. From kindergarten until eighth grade I attended an Orthodox school, where we prayed each morning to “Jewish God” and sank our collective teeth into half a day of Hebrew and Torah studies and half a day of a typical Canadian curriculum. My brain was molded to know that the beginning of our human universe was a result of God creating the world from Adam’s rib.

Today, with a spiritual heart and a mind soaked in what I call grace, I honor my Judaism. I also honor the Buddhism that my uncle—who was a monk for 23 years in the Thai Forest Tradition—lovingly taught and shared with me, and I welcome the elements and the earth by way of the Goddess. Using all these traditions, I honor this most exciting time in the Jewish calendar year, Passover, or in Hebrew, “Pesach.”

Since Passover commemorates the Jews escaping slavery in ancient Egypt, it is also a time to reflect on the history of other enslaved peoples and to consider what advocacy can be planted in this time of the spring equinox so that it may bloom for a different, more just future.

The rich rituals embedded in the days before, during, and after the Passover holidays are completely fascinating, absurd, and kind of unbelievable. I will speak from the “I” perspective here as not to be the autobiographer of anyone else’s Jewish identity story, but many of the things I am about to describe are the matzah status quo:

The selling of the bread: Before Passover, my family (who eats bacon and cheeseburgers often) calls up the local rabbi and brokers a deal where he “purchases” our bread. We then place all of the bread in our freezer and no longer have “ownership” of it for the 10 days of Passover. It is 2019. This is wonderful, see?

The seder “order”: We sit for at least three hours to read and sing and eat things in a special order. We gaze at a plate of symbols. We hide a piece of matzah (a cracker). We sing, pour a glass of wine, and leave a door open for a ghost named Eliyahu. We dip our finger into a glass of wine and then onto the tablecloth while singing about ancient plagues. We also drink, at the very least, four glasses of wine. The other quite astonishing thing is that because my family has done this for so long, we know the words and harmonies of every song and can just burst out and sing them to perfection. No practice needed. It is curious we don’t reflect more on how impressive this is.

Kosher for Passover: My beautiful father and many of my friends and extended family members do not eat bread for 10 days and honor the Jews who fled slavery in Egypt and lived in the desert and were bestowed Jewish Law.

Last year, my soul had the pleasure of attending a Passover workshop with Starhawk (the quintessential Jew-witch permaculture queen who I have long loved and respected) on a different interpretation of Passover—one from the perspective of Miriam rather than Moses. We explored the pagan roots of the holiday, ancient springtime purification rites, and learned about Miriam’s Well.

In Starhawk’s own words: “Passover, or Pesach, was the ancient spring festival of the land of Canaan, a time of cleansing and renewal, that became intertwined with the story of the Exodus from Egypt.” She said that “right now, we need sources of resilience and creativity to help us counter the bondage of a society growing ever more callous, cruel, and oppressive.”

She continued on saying that, “Miriam—an ancient Hebrew Goddess/Prophetess long before she became a Biblical figure—was said to have a well that followed her wherever she went. Like this well, deep sources of strength and regeneration that can replenish our energy and deepen our magic even when we wander in the desert of our current social and environmental breakdowns.”

Miriam, the sister of Aharon and Moses, was never mentioned at any of the seders I have attended for the previous 30 years. Her magical compassion for the Jews as they lived on Manna and suffered for 40 years in the desert after leaving Egypt was not a part of the stories we were told in Hebrew School. Is it because she was a woman? It cannot be because the story is too uncanny, for we speak with certainty about Moses splitting a sea. It is curious why Miriam’s Well is not a more popular Passover tale, especially since the emptying and filling of her waters is a marvelous symbol for the holiday.

As I mentioned earlier, Jews clean out their homes and sell their bread emptying out for the holiday and renewing with the spring equinox. In our workshop, Starhawk gave us all small brooms to clean out our own selves. To clear and remove the sediments in our bodies and minds that no longer serve us. We collectively closed our eyes and did this. It was a profound moment for me because it so clearly reminded me of the Buddhist teachings of Ajahn Suhmedo and his sentiments of clearing out the mind, becoming quiet and emptied of thought, and that just then and there do we have any ability to serve and receive others with compassion.

Religion can be—dare I say it—wonderful. It provides us all with a moral responsibility. It blooms and bursts with reminders of breathing in grace (gratitude). The organizations are so filled brutal dysfunctional and quite frequently hellish (pun intended). Many have forgotten how beautiful and interesting the traditions are that spirituality holds.

I work at a very “progressive” school as a Drama teacher in the Bay Area of California. It is a joyful experience as an educator to learn, and to unlearn; to release experiences and knowledge that no longer serve us, making room to gobble and ingest new wisdom. Starhawk’s workshop was a wonderful allegory for Passover itself. I undertook an understanding of Miriam’s magical Well, forgetting the story I had understood as the basis for this holiday for 30 years.

I often share how I wish we were more inclined to teach religion rather than live in a completely agnostic sphere. Our “evolution” is now perhaps too safe and leaves us in a non-grace state. What is learning without understanding and considering all of the beautiful things our family happens to do?

I invite you, dear reader, to read and digest this as playfully and lovingly as I have written it and to use it as an epicentre of thought around a tradition you “just so happen” to do—that can now perhaps expansively turn into one you feel eternally grateful and excited to share about.

With that, have a magnificent Passover holiday and springtime and do not forget how lucky we are that the second seder this year falls on April 20th—aka 420, allowing the bitter herbs on the seder plate to take new meaning and to perhaps welcome a new tradition that pairs well with your unending well of wine. 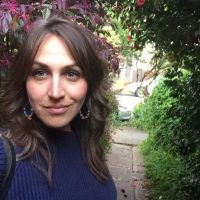 Jackie Katz is a Canadian Educator, playwright living in Oakland, CA. In the spring of 2017, she completed her MA in Social Practice and Public Forms with a focus on radical p… Read full bio

Image: Author's own by Susi Milne