Marianne Williamson is running for president.

This current presidential cycle is one of those occasions in history when everything feels personal.

The news of her candidacy hit me so deeply, it teased out deeper contradictions within me that I was not fully aware of.

I remember the moment clearly when I first learned the news. I shuffled in the door, soaking wet from the rain and so happy to finally be home.

Someone had posted a video about Marianne Williamson which piqued my interest. I eagerly waited till I got home to watch it so I could fully listen to the audio. I began taking off my wet things, and with one red plastic rain boot still on, it drew me in. Marianne Williamson was on CNN and talking about running for president!

I was somewhat familiar with Marianne Williamson. I knew she was a modern spiritual guru who had written many bestselling books and was also an advocate for A Course in Miracles. Every time I heard her speak, I was always impressed and wanted to know more. However, I was also aware she’d had a poor showing in California a few years ago when she previously attempted a run for Congress.

Hearing her speak on CNN, I was completely astonished, my mouth hanging open wide. She gave an amazing, strong, powerful, uplifting interview. Her words, “You’re allowing market forces to replace democracy as your organizing principle for society…We need an integrative model of politics. The political conversation we have now is so stuck on the externals but that is inadequate…” rang in my ear.

For the first time in what seemed like forever, I released some anxiety over my hope for this country and our world—it seemed as though no one was really dealing with the depth of the problems. I’d held this existential anxiety for so long, I’d forgotten just how heavy it was. And I broke down and cried right there on the floor, even before I finished hanging up my coat.

Her CNN interview also dropped one other “bomb,” an issue no other candidate was even mentioning: reparations for slavery.

In all honesty, before she brought it up, I had no concept of what reparations could actually mean. It seemed like a fuzzy concept, an impractical but nice ideal.

I thought, the Civil War was so long ago, how could we reliably track and fairly compensate all the descendants of former slaves? What would be the point?

And yet, Marianne saw the deeper significance. She stated, “Racism is an American character defect, for which we must atone, make amends, and be willing to change. A debt unpaid is still a debt unpaid, even if it’s 150 years later.”

Her plan is to pay $100 billion or more over 20 years, distributed by a council of esteemed African American leaders for educational and economic projects. She said that investing in reparations would be a deep and abiding gift to future generations of Americans, both black and white.

I was amazed at her authenticity. Finally, someone understood the depth of the problems in this country and was willing to talk about the root of them, not just surface remedies. Her courageous message somehow made me feel more seen and heard than ever before. It felt so good and novel to have politics addressed from a spiritual and interpersonal perspective.

In that moment, still sitting on the floor and a little bleary-eyed from my emotional breakdown, I was so moved that I went ahead and donated to her campaign. I so badly wanted her message to be included in the debates. And it felt so satisfying that I could do something—right then—to give momentum to this movement.

Later that night, before heading off to sleep, I was charged up and curious to see how other candidates running for president—outspoken progressives such as Alexandria Ocasio-Cortez, the major news networks, and even Fox News—would all respond to these bold, novel ideas.

Surely, given how spirited the national conversation currently is, many people would have strong opinions to share on these topics over the next few days. I felt eager and excited to hear other perspectives in the following days.

However, the next day, as I thought through these things more, something really surprised me.

I felt some doubt or hesitation emerge in my confidence for Marianne that had not been there before. I started to question myself and my previous judgments. I wasn’t just doubting her, I was doubting myself and my inner conviction to my own beliefs.

So many questions came up for me.

Could we really approach national problems from a spiritual perspective of vulnerability, trust, and healing? Is focusing on those things really substantial enough to see positive changes in our country? All these things sound nice, but are they practical? Is everything really thought through here? Could we as a nation really trust in each other’s best intentions, or is the road to hell paved with good intentions?

And then I started asking myself where all this doubt was coming from. Wasn’t it the depth of love and healing in her unique message that drew me in from the very beginning? Why was it that those same qualities that I most liked about her message were also the ones now casting doubt upon it?

What did that say about me? Was I doubting her, or was I revealing to myself that I’m at odds with my own beliefs, that I don’t have faith in them?

As I mulled over how wise it was or wasn’t to live fully with a deeper commitment to my own beliefs, I was reminded of one of Marianne’s most famous quotes:

“Our deepest fear is not that we are inadequate. Our deepest fear is that we are powerful beyond measure. It is our light, not our darkness that most frightens us. We ask ourselves, ‘Who am I to be brilliant, gorgeous, talented, fabulous?’ Actually, who are you not to be? You are a child of God. Your playing small does not serve the world… As we are liberated from our own fear, our presence automatically liberates others.”

I thought the quote ironically got to the heart of the issue I was grappling with.

Could I really dare to be so bold and live so large that I am in full faith and conviction to my beliefs?

As a yoga teacher and healer myself, Marianne’s values of love, forgiveness, and faith without allegiance to any religious affiliation line up with my values. But do I really believe that a person who is devoted above all to spiritual ideals, working to actively cultivate miracles, is the best person to lead our country? Or does a politician need to be able fight dirty sometimes, to bend the laws of morality at times for the advantage of our country? In the short-term, do the ends sometimes justify the means? Or is it most beneficial to strictly stick to your morals at any cost?

All of these questions started circulating in my brain.

To cast further doubt on my initial enthusiasm, when I searched around online to see how others were reacting to her campaign, I found almost nothing. No reactions on Twitter from other elected officials or attention from television networks. Not even reactions to the potentially divisive issue of reparations. She was largely being ignored in the media, and I was going to have to make up my own mind independently.

In my own life, I aspire to live by my ideals and from a courageous place as an openhearted and trusting person. I do my best, but surely sometimes, I succumb to fear and let myself down, and sometimes I get taken advantage of as well. I have suffered personal and professional heartbreak and failures in the name of being loving, but I have also had many successes for the same reason. It feels somehow riskier when it is not just my well-being at stake but the well-being of the entire country.

At the moment, it feels affirming for my world view and sense of self to continue to trust Marianne and her nontraditional political movement. The burden of proof is currently, however, on her to somehow demonstrate through the rest of her campaign that she has the practical expertise to match her spiritual resolve.

Marianne’s campaign for presidency brought to the forefront of my mind some deep personal and internal struggles. And I am beginning to realize that in order for a person to back her fully as their candidate, they will not only have to support her policies but also be willing to introspectively examine if they’re in integrity with their own spiritual ideals.

This is a lot to ask of voters.

I would call a nationwide spiritual transformation on that level a miracle.

But if this miracle is indeed possible, I see no other person more fit to spark it than Marianne Williamson.

When examining my own thoughts, it was surprising for me to realize just how much of my initial internal wisdom I was quickly willing to discount. I second-guessed my inner guidance with more conditioned, skeptical thinking. It was largely due to my own self-doubt and not someone else’s reasoned arguments driving this line of thought.

As we—both as individuals and as a country—go through this time of transformation, it is important not to get caught in the trap of safe cynicism, but to instead courageously reach for what more is possible.

Having the courage to believe in ourselves and what is possible is the only way we can ever bring it into being. It is only when we are able to live vulnerably from our hearts that we will be able to confidently choose leaders who do the same. 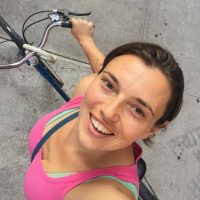