Why Earth Day is a Sham.

People get shocked when they see me indifferent or even oblivious of these ceremonial events. Those who know me well get confused.

I buy thrift or borrow clothes from cousins and friends (manufacturing processes are big eco-damagers), will go thirsty but not buy plastic bottled water—heck, I even go to the extent of offending family and get mocked at, by refusing non-plant-based food because it is not eco-sustainable.

But I don’t care about these special days, where we proclaim our commitment to Mother Nature.

For a long time, the image California carried for me was one of evolved consciousness toward social issues, environmental awareness, healthy habits, and a generally responsible disposition.

That was until I saw dedicated yogis capping off their yoga session with green smoothies in a plastic glass with a plastic lid and a plastic straw. I saw people hoarding Amazon products, which come packaged in ridiculous amounts of paper, cardboard, and plastic. (“Hey, but we recycle all those boxes and envelopes!”)

And until I attended an Earth Day event in a California State Park last year.

As part of his courting strategy, a seemingly responsible gentleman invited me to join him to volunteer for an Earth Day celebration at the Cuyamaca Rancho State Park in southern California.

I was relieved to find people who still cared and took action, and was genuinely excited to be part of a useful endeavor.

I got up early, into my work clothes and outdoor shoes, my steel water bottle carabiner-ed to my day pack, along with two apples, five carrots, a handful of nuts, and enthusiasm of an impassioned youth.

The event was organized by an independent volunteer group but funded by the State Park agency. There were talks of cleaning the recreational areas, trail maintenance, and prepping the public areas for the camping season.

I was hoping to secure a spot in the trail maintenance crew. Instead, I spent the next two hours begrudgingly collecting pine cones and twigs (yes, twigs) into a huge black plastic trash bag. As did the rest of the volunteer group. A selected few got rakes to remove the pine needles.

We were “cleaning up” the public recreational areas to spruce it up for the visitors.

I showed my dissent by creating pyramids of pine cones around big trees instead of trash bagging them. I got mostly dismissive looks by the “veteran volunteers” and some amused expressions.

I took a few deep breaths, nudging myself out of my sulking, and deciding to make my time count. As I “cleaned” the area of stray cones, sticks, and forest debris, I spotted straws, twisters, bread tags, foil, and other pieces of real trash, under the picnic tables. It hit me that no one had talked about picking these up. Instead the brief was specifically, cones and twigs. I almost kicked myself for not considering this at the onset.

I looked around and no one else seem to be bothered. To bring it to the collective consciousness, I walked up to a park employee, nestling a bunch of crap between my arms, and loudly asked him if I was supposed to pick up these trash pieces or just the cones (insert high-level sarcasm). He responded in a matter of fact way, that he did not know the answer as he was on a different team and not involved in the clean-up event.

However, he promptly got me another black trash bag.

By this time, I had had it. My mind wished all sorts of catastrophes on the human race, to end this mockery and mindlessness.

“The world will not be destroyed by those who do evil but by those who watch them without doing anything.” ~ Albert Einstein

I must shamefully admit that I did not actively dissent. I was an outsider—to that group, to the country, culture, and didn’t want to embarrass my friend. These are all excuses. I believe I was as guilty that day, due to my inaction.

After I cleaned up whatever human made articles I could find, I convinced my friend to load up the cone-filled trash bags in his car instead of throwing them in the dumpster, and we drove away from the picnic area and emptied the bags at various places in a non-hazardous way.

I wish this was the end of the circus show. 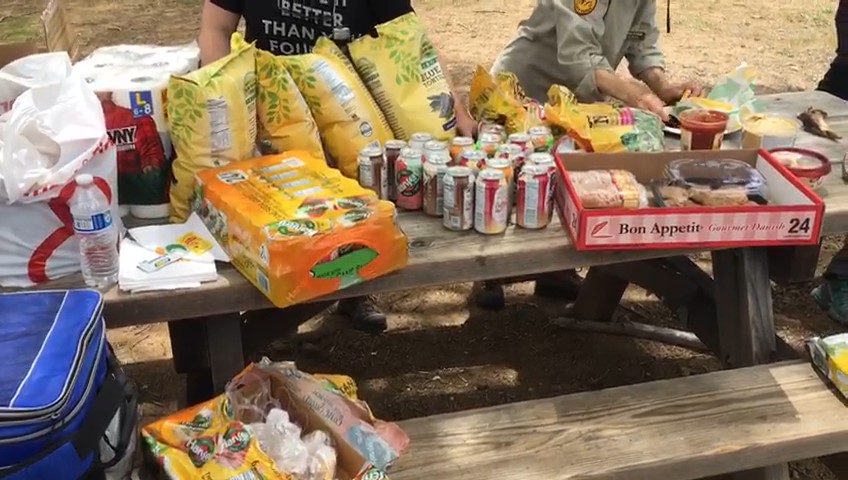 The grand finale was the thank you picnic for the volunteers, with snacks and drinks from the organizers. Soda cans, individually wrapped snacks, supermarket cookies in single-use plastic containers, everything packaged in multiple layers of plastic, film, and cardboard. Bravo!

What happened to apples, bananas, some shared laughs, and actual good work as the reward?

Here is a little video documentation of the after-party:

Tokenism may have its role in making people aware of urgent issues. It would even be okay if it stopped at gimmickry. But these events hurt the cause more than serving it due to:

>> The waste created while organizing such events.
>> We get rid of our guilt by “doing our bit” on a particular day, getting a free pass for the rest of the year.
>> Absolving ourselves from making consistent lifestyle changes, lightened by volunteering on one day.

Instead, it’s better to simmer in our guilt, with the hope that it will push us into breaking our patterns and choosing better actions, overcoming the trap of convenience, and conditioning.

I have still not sunk into complete dejection, and this is my attempt to stir up action. I intend this article to be more than a venting tool, and I request you to share one or some changes that you have implemented in your routine that you would recommend to others.

Each individual action holds the power for collective change.

Please share in comments below, your tips, and help make this Earth Day count!

Sukriti Chhopra is currently based in New Delhi, India after a few years of nomadic living. She writes, edits, and coaches writers. And feels she is a better coach than an edi… Read full bio